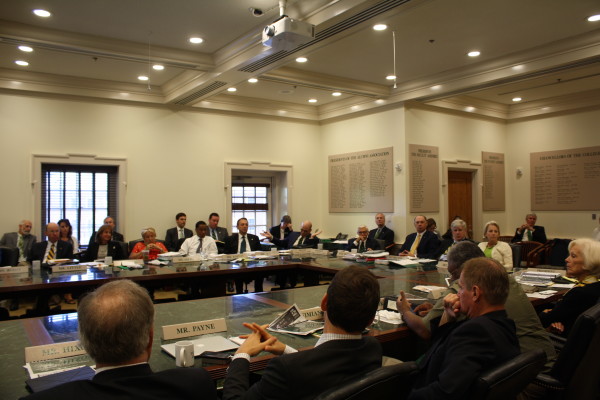 The Board of Visitors Committee on Student Affairs discussed the report released by the Task Force on Preventing Sexual Assault & Harassment, as well as initiatives on mental health and career development at the College of William and Mary Thursday, Sept. 17.

In her introductory remarks, committee chair Lisa Roday said she wanted to commit to being more involved with students.

Vice President for Student Affairs Virginia Ambler ’88 Ph.D. ’06 gave updates on the beginning of the year work of the sexual misconduct task force.

“We’re in the process of developing a position description for a full time [sexual assault] education and prevention specialist,” Ambler said.

Ambler also addressed new initiatives on mental health, such as the College’s membership in the Jed and Clinton Health Matters Campus Program and the after-hours ProtoCall hotline.

“The hotline is being used already by our students,” Ambler said. “It allows us to continue expanding our services, even after the hours of the counseling center.”

In 2014 and 2015, the College was named one of the most promising places to work in student affairs by the American College Personnel Association and “Diverse: Issues in Higher Education.”

“We’re the only research university in Virginia to make that list,” Ambler said.

Ambler then presented a promotional video made by student affairs staff, in which staff members spoke about the benefits of working in a division that values diversity.

Following this video, student liaisons from the Student Assembly Ryan Goss ’16 and Yussre El-Bardicy ’16 presented findings from an SA survey that was made available to the entire student body.

The survey was intended to discover students’ feelings about life after college. Goss said many students expressed concern over whether their liberal arts education would translate to real world skill.

“The skills we learn in the classroom are important, but a lot of students are wondering how they translate to real world experience,” Goss said. “How do we empower students who are going to take a risk and take a path less traveled?”

El-Bardicy said relationships between students, faculty and alumni are becoming increasingly important to college students across the country.

The meeting wrapped up with a presentation about the work of the Cohen Career Center from Assistant Vice President and Executive Director of Career Development Kathleen Powell.

Powell said that based on Career Center’s research, students from the College have gone into 90 different functional areas and 59 different industries and that this should be encouraging to students worried about their career prospects after college.