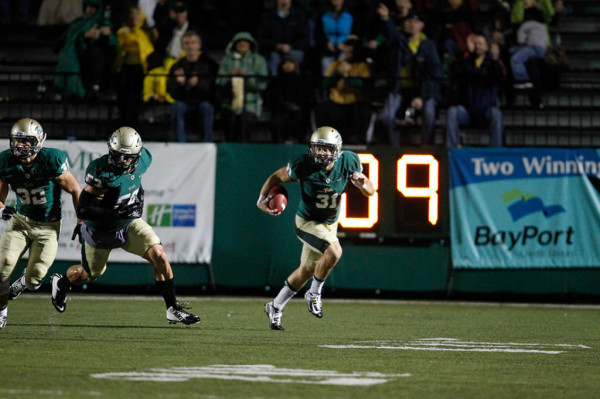 Saturday night saw the return of football to Zable Stadium, halting the construction of the new renovations to instead construct something No. 22/25 William and Mary football also needed — a solid home opener performance and a shutout of a Colonial Athletic Association opponent.

In a dominant display of athleticism, both the offense and defense were impressive in their efforts to control the ballgame against Stony Brook. After last week’s close loss at Virginia, something must have ignited in the team that pushed them to the peak this week with a 21-0 win.

As it has been in recent years, the rushing game was crucial to victory. With senior tailback Mikal Abdul-Saboor taken out for injury last week, his performance was good, but didn’t break 100 yards. Instead, junior running back Kendell Anderson tore up the field for 191 yards on 19 carries and two of the night’s three touchdowns. I want to take a moment to talk about Anderson a bit more, as his performance Saturday shows he has been underutilized as Abdul-Saboor’s backup for much of his career.

Looking back at the highlights, it’s crazy to think that [Junior running back Kendell] Anderson scored the touchdown, as he actually fumbled the ball while running, caught it again and continued to run with defensive pressure on him.

Anderson’s first touchdown was a 28-yard run to put the Tribe up 14-0 in the second quarter after sophomore tight end Andrew Caskin already made a receiving touchdown in the first quarter. Looking back at the highlights, it’s crazy to think that Anderson scored the touchdown, as he actually fumbled the ball while running, caught it again and continued to run with defensive pressure on him. On the late touchdown in the fourth quarter, Anderson ran 59 yards with at least three defenders right behind him, using his incredible speed to outrun all of them for the score.

Junior quarterback Steve Cluley was not particularly great with a 61 percent completion rate and getting sacked twice, but he still managed to throw 165 yards compared to Stony Brook’s combined 103 passing yards. From watching the game, it appears more that the receiving corps stepped up and made some beautiful plays off throws that started to dip low early. Redshirt freshman wideout Jack Armstrong made a textbook completion on 3rd and 6 for a first down far down the field in the second quarter. Despite near pass-interference by the Seawolves, Armstrong got the ball just before he hit the ground. Similar to that, sophomore wide receiver Daniel Kuzjak made a play where I had to watch the highlights to see the completion, as the ball disappeared before he caught it when seeing it live. Cluley is certainly starting to look more confident, but his receivers and rushers have really made many of the plays when his game hasn’t always been the most precise.

Of course, I can’t talk about a shutout victory without the defense. No touchdowns allowed, an interception in the red zone, three sacks and eight drives ending in punts. It was a phenomenal night for the College defense, even with senior linebackers Ian Haislip and Zach Fetters out from last week’s injuries. Senior linebacker Luke Rhodes finally started to look like the All-CAA preseason player he is, swatting down passes and getting a couple of much needed tackles. Leading the defense Saturday was senior defensive tackle Tyler Claytor with seven tackles, including 2.5 tackles-for-losses and 1.5 sacks. Claytor and the defense were not only quick but in the right positions. They appeared more of a unit than last week, when U.Va. took advantage of the injuries for a few plays that were detrimental to the Tribe’s potential upset.

Hopefully for the Tribe, this is not a shining moment before a downward spiral that pushes it from the Football Championship Subdivision playoffs but instead an indication of things to come for the rest of the fall.

As far as the game’s implications, I won’t be so quick to jump to conclusions. Yes, it’s great that the Tribe starts its CAA slate 1-0 to a team that was undefeated for the first three weeks of the season. However, Stony Brook’s other CAA contest was a win over No. 20/23 New Hampshire, a consistent powerhouse in the conference, who had an injured quarterback that caused the Wildcats to collapse.

The game this year was a blowout, much different than last year’s overtime comeback up at Stony Brook. It was different because the offense and defense came together and really looked determined to defeat the Seawolves, which the Tribe accomplished. The rest of the CAA will be watching the Tribe intently to see if it plays well against Delaware next week on the road and against conference favorite Villanova the week after that. Hopefully for the Tribe, this is not a shining moment before a downward spiral that pushes it from the Football Championship Subdivision playoffs but instead an indication of things to come for the rest of the fall.