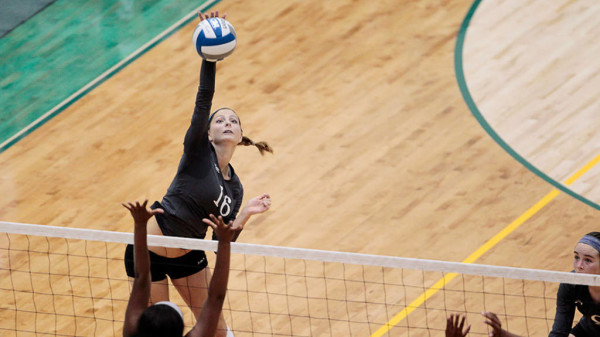 In a culture where the majority of sports arguments center around a certain team or player being extremely overrated or underrated, William and Mary has achieved a rare feat: anonymity through mediocrity. With the Friday night 3-0 loss to Colonial Athletic Association opponent Hofstra in Hampstead, N.Y. followed by the 3-1 victory over CAA foe Northeastern Sunday night in Boston, Mass., the Tribe is on pace for a highly predictable season of dispatching inferior teams with ease while never threatening to upset a favored opponent.

Hofstra (12-6, 3-0 CAA) steamrolled the College in the first set to the tune of a 7-0 start, eventually securing the lopsided point via a 25-17 victory with no ties. The Pride’s lead was shortened to 10-7 at one point off a pair of kills by senior Dessi Koleva, but William and Mary was unable to build any further momentum.

The Tribe fully awoke in the second set, playing to a 12-12 score midway through with eight ties before the set slipped away to a 25-22 Hofstra victory. The College nearly pulled in front at the end, down a single point on a 2-0 run with the score at 22-21, but the hosts recovered for the win.

The final set was similarly dismal to the first for the College, as the Pride rattled off a pair of 3-0 runs and a 4-0 run to clinch the set at 25-17. William and Mary has not beaten the Pride since 2012.

On Sunday the Tribe (7-8, 1-1) cruised past the Huskies of Northeastern in a 3-1 victory. The Huskies (4-14, 1-2) are off to a horrendous start to 2015 and consequently flopped in the first set against a near-perfect Tribe attack. The College fired a .462 attack percentage for the first set, and cruised to an error-free 25-18 win.

The Tribe continued the momentum into the second set, but nearly lost a 17-10 advantage on a late Huskie surge. Koleva, the College’s lead scorer of the game, notched two of her 16 match kills in the final points to edge the Tribe ahead of Northeastern by a 25-21 margin.

The Tribe thus far has performed up to par, as the combined record of opponents the Tribe has defeated is a putrid 27-87, or roughly a .234 winning percentage.

Northeastern finally put together a solid set in the third, stealing the Tribe’s shutout chance with a hotly contested 25-22 win. William and Mary sneaked ahead of the Huskies in the final set with a 21-20 lead after trailing since the third point and maintained the narrow advantage for the 25-23 victory over the conference opponent.

As Northeastern finished last season at 10-20 while Hofstra completed a 28-6 campaign in 2014, the Tribe is emerging somewhere in the middle of the pack of the CAA, despite leading the conference in returning All-CAA players with three (Koleva, redshirt junior Michelle Heath and sophomore Sara Zumbach.)

However, a middle of the pack performance from the College is better than last year’s 7-24 campaign, as the 2015 squad has already tied last season’s win total. Up next for the Tribe is a homestead weekend against two conference opponents: Towson and James Madison. Friday’s tipoff against Towson is set for 7 p.m. at Kaplan Arena, while Sunday’s matchup against James Madison will begin at 2 p.m. in the same location