Home Latest News Raft Debate votes to save the children 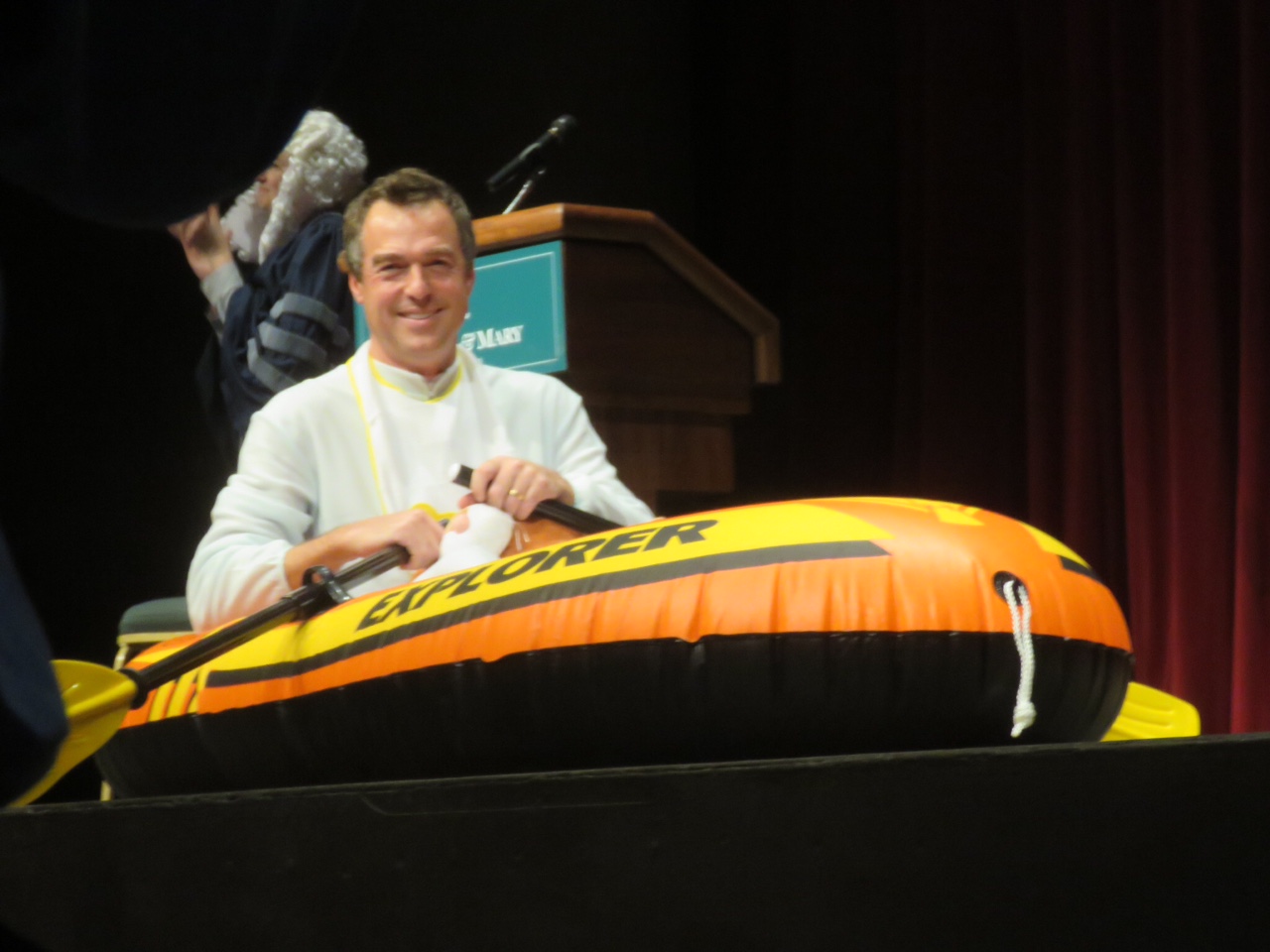 The campus filled up the Phi Beta Kappa Memorial Hall Monday evening to watch the three main faculty disciplines duke it out at the annual Raft Debate, where the end vote decided that the oversized baby of social sciences, Dr. Peter Vishton, would make it to safety.

The College of William and Mary hosts the Raft Debate every year where one professor each from humanities, natural and computational sciences and social sciences argue over who should win the raft trip back to civilization from the hypothetical island they are stranded on. In addition to these three professors, a devil’s advocate argues the position that none of the disciplines deserve rescuing.

In the words of Dr. Vishton, “It’s supposed to be fun.”

And sure enough, from the beginning you could sense the fun as the judge, Virginia Torczon, Dean of Graduate Studies and Research, Arts & Sciences, modeled a wig, Dr. Preston sported a fashionable pink boa and floppy black sunhat, and Dr. Vishton showed up in a full sized baby onesie, carring a large baby bottle and stuffed hamster named “Carmel.”

It’s supposed to be fun.

Once Torczon started off the event with setting the scene for competition, Dr. Del Negro took the focus to argue for the natural and computational sciences. Making an example of Stone Hedge and a three foot tall Eiffel Tower, Dr. Del Negro argued the science behind any of these cultural pieces of beauty.

“Only once we solve these basic problems to survive and to thrive,” Del Negro said. “Can we begin to build a culture.”

The next debater was Dr. Preston arguing for the humanities. To start off her argument Preston passively cast some shade to the sciences as she said, “I’m not going to point out all the bad things that empirical thinking has brought us.”

She then moves on to argue how we, as people, are “cultural creatures” and this culture is everywhere. Queue song break from the audience for an impromptu performance of a few lines of “The Hills are Alive” from The Sound of Music. Then Later, further kazoo noise fun, and a round of “Row, Row, Row the Raft.”

Next to debate was Dr. Vishton and his stuffed hamster – who he successfully resigned to the care of the judge. On stage with him, were his son and daughter who, at opportune moments, held up comic signs like “Naked apes rule” and “Dad is no Whitney Houston.”

“I am not a baby, I am the future.” Vishton said. “Of the three disciplines represented, the social sciences are by far the youngest. Social science certainly has the most left to do with its future, the most potential. Don’t throw out the baby with the bathwater.”

For the price of the space station, we could save the lives of over 700 million impoverished children. That’s pretty much all of them.

Lastly, Dr. Freiman came on citing the problems with each faculty in their own right and how not one particularly deserves our rescuing. He thanked music for “Beethoven,” but also for “Justin Bieber” and the natural sciences for the space station while pointing out its enormous cost.

“For the price of the space station, we could save the lives of over 700 million impoverished children. That’s pretty much all of them.”

In the end, the crowd went kind hearted and connected with Dr. Vishton’s message, “do it for the children,” and could not allow for the baby to be left on the island. When it comes down to it though, Vishton brings up a point to remember.

“I hope that it doesn’t come away that one of these subdomains is better than the others.”

So, for anyone not in the field of social sciences, no need to panic.