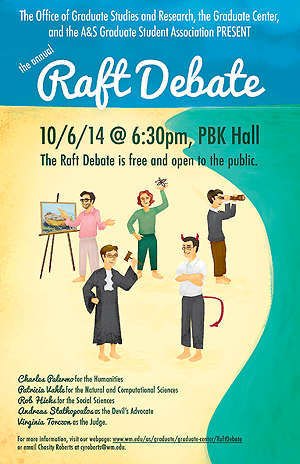 Early Monday evening, as a crowd of College of William and Mary students gathered at Phi Beta Kappa Memorial Hall, fans of all academic disciplines could agree: In this year’s land of tri-disciplinary debate, the Devil’s Advocate is the king.

As the Raft Debate always goes, professors from three academic disciplines — humanities, social sciences and natural sciences — find themselves trapped on the sands of an imaginary desert island with only one life raft to spare. Each instructor must argue the importance of his or her field and, more importantly, why each is worthy to secure the coveted raft back to civilization.

The debate got off to its typical start this year as Virginia Torczon, Dean of Graduate Studies and Research for Arts & Sciences, explained her role as the judge of the scenario.

“If these were normal people, I would expect them to work together on the problem and try to come up with a solution that saves them all,” Torczon said. “But these are not normal people. These are professors.”

Those “abnormal” people to whom she refers to are director of film and media studies Charles Palermo, economics professor Rob Hicks and associate professor of physics Patricia Vahle. As per tradition, the debate is completed by the Devil’s Advocate, this year played by computer science professor Andreas Stathopoulos.

First up to the podium, Palermo begins his argument with the explanation of his attire — a seemingly ordinary black velvet smoking jacket with matching red trousers, completed by his signature large-framed black glasses. The explanation for the outfit, however, presented much more.

“If you’re old enough to remember the 80s, you’ll remember Alistair Cooke,” Palermo said. “That’s who I’m dressed as. He wasn’t the most interesting man in the world, but he was the host of the ‘Masterpiece Theatre.’”

Palermo concedes that although society has grown somewhat suspicious of the genius behind artistic and literary masterpieces, it only takes one man like Cooke to put the brilliance of the art to good use. Finally, Palermo points out an inherent disadvantage of the sciences in the face of the humanities: Science, unlike creative thought, is born under the “sign of finitude.”

Making the transition in both subject and costume time period,  Hicks took the stage in James Madison-esque attire to argue not only the advantages of the social sciences, but also the disadvantages of those practices associated with the humanities and natural sciences.

“The fundamental human achievements of culture are wholly predicated on institutions in society,” said Hicks. “Without these institutions we would be shivering under a rock somewhere.”

With more than a hint of irony in his voice, Hicks then went on to thank the humanities for its part in the creation of both the allegorical “Walking Dead” and the popular “Keeping up with the Kardashians.” As for the natural scientists, the economist offered up a “tip of the wig” to those who are able to create earthquakes and other unnatural disasters for the sole purpose of scientific research.

Vahle’s turn at the podium further stirred the debate as she promoted the measurability of the natural sciences.

“Science is not about debate,” Vahle said. “The prediction is either right or wrong.”

To demonstrate physics’ concrete nature, Vahle examined the movement of a projectile — in this case, a t-shirt gun shooting various t-shirts into the cheering crowd. The spectacle itself seemed to contradict both of Vahle’s colleagues’ assertions that natural science is, in a word, dull.

Finally, as Stathopoulos took his turn at the podium, the Devil’s Advocate offered up his thoughts on the necessary evil that is interdisciplinary cohesion.

With that, undecided majors breathed out a sigh of relief as their choice in discipline became far less stressful: After all, they have decided, every subject is important.

The winner was determined by a sound-decibel meter. Stathopoulos garnished the most applause from the audience, with Vahle’s applause a close second.