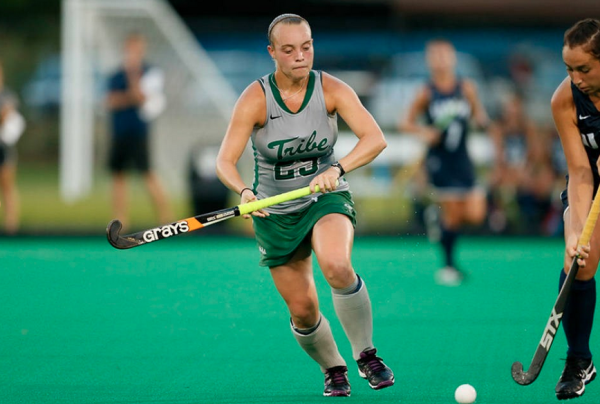 After entering the 2015 campaign with high hopes, seasoned veterans on offense and at goalie, a pair of All-Colonial Athletic Association preseason selections and a team rank of No. 4 in the conference, William and Mary extended two less-than-desirable streaks this past weekend. The Tribe now has three consecutive seasons of 10 or more losses and a current three-game losing streak, courtesy of a 1-0 loss to CAA rival Drexel Friday and a 4-3 loss to St. Joseph’s Sunday in a cold, blustery and ultimately disappointing weekend trip to Philadelphia, Pa.

Although the College (5-10, 1-2 CAA) entered Friday’s game with a subpar 2-5 road record, the Dragons (6-8, 2-1 CAA) had struggled with their own set of problems in home games, posting only a 2-3 record. As one might expect based on the standings, the matchup proved to be an even one, with neither team scoring in the entire first half. The Tribe’s high-power offense, which started the season with 15 goals over the course of the first four games, was rendered ineffective with seven shots on goal met by seven rejections. This marks the second straight week of underperformance by the team’s most experienced unit after the heartbreaking 2-1 loss to Northeastern.

The Dragons managed two more shots per half than the Tribe for a total shot advantage of 16 to the College’s 12. After the prolonged stalemate, Drexel finally broke through the Tribe defense, as freshman Lindsay Boerner of the Dragons cracked a hard shot into the diving keeper senior Meredith Savage. Savage initially denied the shot, but the impact drove the ball straight upward, falling down just in front of the crossbar and rolling in before Savage could recover. The remaining 14 minutes ticked away, and the College, after falling to CAA foe Northeastern in the final 10 seconds, suffered another demoralizing defeat in the conference.

With the loss the Tribe plunges to sixth in the seven-team conference, only above lowly Towson. Mathematically, William and Mary is barely alive for the four-team CAA playoffs with four games remaining, and it is increasingly likely the Tribe will be left out in the cold come November, an Icarian fall from the 3-1 start to this season.

On Sunday, the Tribe choked away a 3-1 lead in the first half en route to a 4-3 loss to St. Joseph’s (6-8, 3-3 Atlantic Ten) in the worst second-half performance by the College since the consecutive losses to No. 13 Old Dominion and No. 4 Duke on Sept 11 and Sept 13, respectively, both cases in which the Tribe surrendered four second half scores.

For the first 35 minutes, the College owned the game. Junior midfielder Maria Jose Pastor struck first for the College nine minutes into action, knifing a hard shot in a chaotic scuffle in front of the Hawks’ net. St. Joseph’s quickly recovered and fired in the tying score unassisted during a defensive breakdown just 20 seconds later. However, the Tribe defense proved solid for the remainder of the half, as that was the only shot they allowed, lifting the College to a 10-1 shot advantage. Sophomore forward Cammie Lloyd made sure those shots didn’t go to waste, adding her own unassisted goal by cutting the ball over the keeper’s shoulder with 21 minutes remaining. Two minutes later, Lloyd inserted the ball on a penalty corner, providing the assist to senior defender Peyton Smith who hammered the ball past the keeper.

30 seconds into the second half, the Hawks cut the Tribe led to just a single goal, as the College allowed a long pass on a fast break which led to St. Joseph’s second tally. The Hawks continued the comeback bid with a vengeance, striking again just four minutes later to tie the game, this time off an unassisted goal. The reeling Tribe recovered to stop the bleeding, managing two shots to respond. However, St. Joseph’s remained determined, earning a penalty corner which they subsequently capitalized on with fifteen minutes left to play. Down a goal, the Tribe could not find the equalizer on their final three shots, dropping the game 4-3.

Up next for William and Mary is another CAA matchup against James Madison, currently the  No. 1 team in the conference with a perfect 4-0 record against CAA squads. Game time is set for 7 p.m. Friday at Busch Field in Williamsburg, the first of five consecutive home games for the College.