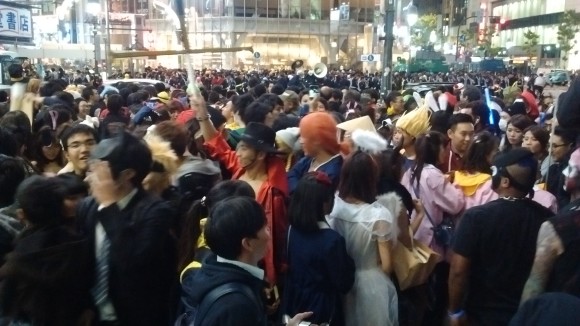 Compared to most of my friends, I have a very low tolerance for horror movies or haunted houses, but I still love Halloween. I love costumes, I love carving pumpkins and I love sweets — this is the only time of year that I get to indulge in candy corn.

Pumpkins are too expensive to carve and let them rot outside your door, although jack-o-lanterns are a common image on baked goods and shop windows.

Halloween in Japan is a very popular holiday, but it doesn’t really include those last two elements. Pumpkins are too expensive to carve and let them rot outside your door, although jack-o-lanterns are a common image on baked goods and shop windows. Japan shares our mentality that everything in October should be Halloween-themed. As for candy, I barely ate any, because no school clubs, professors or businesses were offering any. No candy lying around, no trick-or-treating for college students.

Trick-or-treating, even for younger children, is not a very common activity yet. I think this may be why Halloween in Japan seems to be just a crazy party. Because of trick-or-treating, Halloween in the U.S. is more… communal? You must be involved with the festivities somehow: decorating your house, trick-or-treating, accompanying your children who are trick-or-treating, handing out candy, dressing up at school, going to a party, going to a haunted house or whatever. Before I left for college, I always carved a pumpkin — sometimes one that my family picked ourselves from a pumpkin patch. Pulling the mess of orange guts out of a pumpkin with my bare hands, then roasting and eating the seeds is one of my favorite memories of Halloween.

Every club, bar and restaurant has some special Halloween event, but you don’t even need to attend any of those to get a sense of the Halloween craze.

Of course, for a certain age group, this holiday is more about the parties than anything else, no matter which country you are in. However, the U.S. seems pretty tame compared to Tokyo — especially when it comes to Halloween parties. Every club, bar and restaurant has some special Halloween event, but you don’t even need to attend any of those to get a sense of the Halloween craze. The biggest party happens in the street. One part of Tokyo, Shibuya, is absolutely packed on Halloween weekend. Imagine something like the mall in Washington, D.C. during President Obama’s inauguration, except with drunken, costumed people. This is the place to go if you just want to people-watch, as hoards move in and out of the train station, often wearing impressive or coordinating costumes. So many Marios and Luigis, Disney characters, bloody nurses, superheroes, devils, everything.

A lot of my European friends thought they were supposed to have a scary costume. In their home countries, if you wanted to dress as a fairy or a princess, you would wait until Carnival in spring. That holiday doesn’t really exist in the U.S. or Japan, so Halloween is the time to revel in being whatever or whoever you want to be. For many of them, this includes being an anime character, a pint of beer or a bowl of ramen.

I was a sunflower.