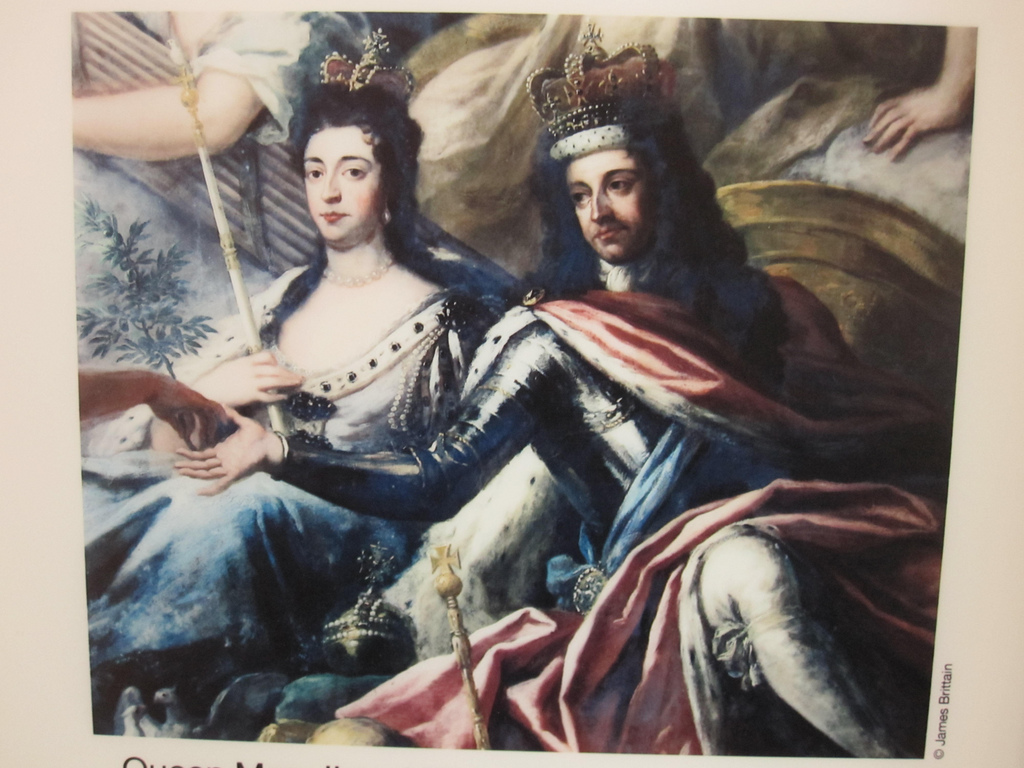 New students sing about them during Convocation in August, we celebrate their signing of the Royal Charter each February, and every student owns at least four or five pieces of clothing bearing their names. William and Mary: we say their names together so often that we barely consider who the monarchs actually were.

Let’s take a look at these historical figures.

Who was King William?

William III of Orange was born in 1650 and raised a Protestant. A Dutch Stadholder, he grew up in the Netherlands. His chief foreign concern was actually France, which, under Louis XIV had invaded the United Provinces of the Netherlands. William defeated the French in 1672. This was the beginning of a rivalry between William and Louis XIV that lasted for the rest of his life. These sentiments were religiously motivated (Louis was Catholic) and drove many of his other ambitions.

Prior to becoming King, William’s relationship with England was complicated at best. He was nephew to Charles II and James II, the two kings who preceded him, through his mother. However, he was actually fourth in line to the throne. Charles tried to keep hostilities between William and Louis’ France to a minimum, lest Britain had to choose a side. The British monarchs, who were Catholic, were scared to lose the financial backing of the Sun King. At the same time, they did not want to enter open conflict with a Protestant power, given that most of their subjects were Protestant themselves. William had his sights set on the English monarchy upon defeating Louis in 1672.

Who was Queen Mary?

Mary II was born in 1662, the daughter of James II. Yes, that makes her William’s first cousin. Despite her father being a Catholic king, she was raised Protestant. By the time she was ten, she was second in line for the throne behind her father (her uncle Charles II was still king at this point).

When Mary found out she was betrothed, she was less than pleased.

After tensions between France and the Dutch Provinces cooled, Mary was betrothed to William aged 15. The union was greeted with glee by Protestants in England.

When Mary found out she was betrothed, she was less than pleased. William was seen as ugly. Also, Mary was five inches taller than him. They were married in 1677. Mary had two miscarriages in the immediate years after their marriage, and the future monarchs never had children.

So how did these two come to rule England, Scotland and Ireland? In the 1680’s, the predominantly Protestant English were tired of having a Catholic king.

There were two triggers for William’s forceful takeover of the crown. James’ wife was pregnant. A son would mean Mary would be skipped in line for the throne, meaning William’s greatest chance at a peaceful transition would be naught. Remember, he had wanted the throne to combat Louis XIV since 1672. A son for James also would have saddled England with another Catholic in the line of succession.

The other trigger was James’ granting freedom of religion to Catholics. This turned popular sentiment in William’s favor, leading to William’s Glorious Revolution in 1688.

It wasn’t immediately clear if William would become king in the aftermath of the Glorious Revolution. Since James fled to France, and wasn’t actually dead, he was still king by divine right. Some called for William to be declared regent, some wanted to give the throne to Mary. In the end, William ensured a shared throne for himself and Mary by using his troops to maintain order. A special meeting of Parliament gave them the throne. Even his opponents in Parliament would rather William became king than have a Civil War that could erode the social order.

William and Mary were benevolent rulers for their time. They guaranteed freedom of religion, albeit only for Protestants.

History professor Nicholas Popper explains, “There were periods of open discussion in the public sphere.”

The people had some say in civil society. The monarchs would generally take Parliamentary opinion into account before ruling.

“They tried to get some Whigs and some Tories on their side on each issue,” Popper says.

The New World was not of chief importance to William and Mary. They did encourage free trade. William was Dutch, after all. However, the downside of encouraging free trade amongst the colonies was the growth of the slave trade.

Popper explains, “The College was founded to promote Anglican religion amongst the Native Americans.”

This fits William and Mary’s goal of promoting a Protestant England. Besides granting the charter, William and Mary had little to do with the establishment of the school. Mary actually died of smallpox in 1694. William followed her out in 1702 and was succeeded by Mary’s sister, Anne.