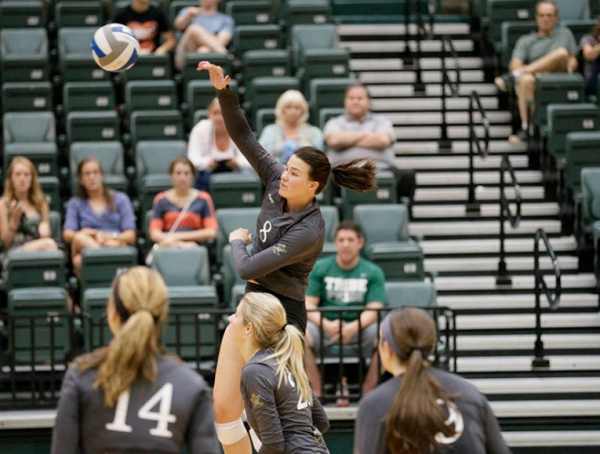 Friday’s match against Northeastern (6-24, 3-12 CAA) was a must-win for William and Mary (10-19, 4-11 CAA), which entered the weekend with a chance to make the Colonial Athletic Association Tournament. Conditions for entry included a Tribe win Friday and Delaware losing its weekend matches. Both happened, and, despite a loss against Hofstra (21-10, 12-4 CAA) on senior day Sunday, the College’s season stays alive.

“We are such a better team than we were five weeks ago, four weeks ago, so it’s exciting to see us keep improving,” head coach Melissa Shelton said.

Down 4-1 in the first set Friday, the Tribe fought to even the set after an ace by freshman Katie Kemp. With a combined block by senior Carolyn Albright and senior Dessi Koleva, the College went on a deep run, its lead stretching to five twice, at 19-14 and 22-17. The Huskies called a timeout to try and slow the Tribe, but this backfired and William and Mary pulled ahead to win the set 25-17.

The second set was back-and-forth until a timeout where the Tribe found itself down 20-15. A quick Tribe run seemed to close the deal, with Kemp and Koleva having three aces each in the set. However, Northeastern rallied and scored the final four to win and bring the match to 1-1.

In the third set Northeastern took an 18-15 lead before the College capitalized on a mistake by their opponents and never let up. Off of an out-of-bounds serve and possession transfer came a pair of kills by sophomore Sydney Biniak, an ace from sophomore Austyn Ames, and sophomore Paige Humphrey winning the set with a kill at 25-20.

The marathon fourth set was played 18 points beyond regulation, and saw some of the strongest play by the Tribe this year. The College stormed to a comeback with a 9-1 run to even the set to 20-19. Koleva carried her team to victory in a fantastic finish, putting the match away at 34-32. She ended the fourth set with 13 kills including the final four that sealed victory.

“I think it’s been an amazing example of their leadership … and how important winning is to them, and wanting to end on high notes,” head coach Melissa Shelton said.

Koleva hit five aces, which had not been done by a Tribe player since 2011. Kemp had 21 assists and 10 digs while Ames had 23 assists and 9 digs in the victory.

Going into Sunday’s match, Delaware had already lost and William and Mary held a CAA tournament berth for its senior day game against Hofstra.

The Tribe found itself down 12-6 early in the first set before amping up its defense and battling back to a 15-10 deficit until senior Mallory Brickerd went down with an ankle injury before eventually losing the set 25-21.

“It was tough because she’s hurt her ankle a few times [before],” Albright said. “So that definitely shook up the team a little bit, but we … just used that as motivation to play better.”

It was tough because she’s hurt her ankle a few times [before],” Albright said. “So that definitely shook up the team a little bit, but we … just used that as motivation to play better.

“We played really well, and so much better than we played them last time,” Albright said. “I think that that’s going to carry into the conference tournament, I am really, really excited to see what we do.”

Set three was a solid exchange of points. A late Pride push put Hofstra up 20-16. The Tribe brought it back to 20-19 but the comeback fell short as Hofstra took it 25-22.

In the fourth, Hofstra began to pull away with two scores for every Tribe point. The Pride was up 9-4 before the College fought back in a 5-2 run to make it 11-9. Despite further rallying, Hofstra won the fourth set 25-20 and left Williamsburg with the 3-1 match win.

“I was really excited about how well we played,” Shelton said. “We played Hofstra much better than the first time we played them. Their middle still kind of ran away with it but overall it was a good effort, and we stayed aggressive. We are such a better team than we were five weeks ago, four weeks ago, so it’s exciting to see us keep improving.”

The College earned the sixth and final seed for the tournament. The postseason begins against No. 3 seed North Carolina – Wilmington 7:30 p.m. Friday night for the CAA quarterfinals in Harrisonburg, Va.