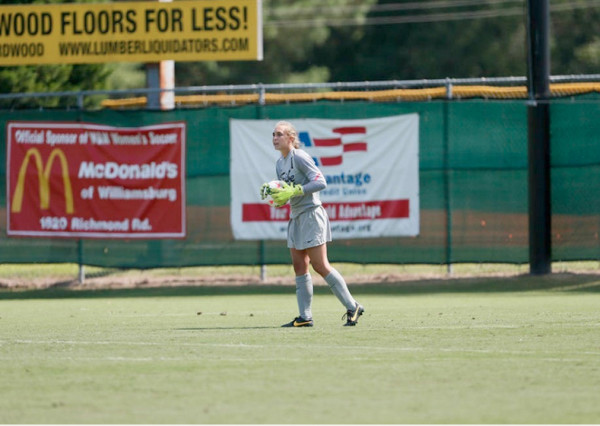 For a team that last failed to score Aug. 30 at Duke (11-5-4), taking penalty kicks was not where William and Mary (14-4-3) expected to find itself Saturday night in Orlando against Central Florida (12-6-1). Yet the Tribe proved that anything can happen in knockout tournaments, as it gritted out a 3-1 penalty kick win over the Knights to advance to the NCAA second round.

After dropping a 2-0 halftime lead in the Colonial Athletic Association championship game to lose 3-2 to James Madison (14-7-2), the Tribe was eager to bounce back in their first NCAA tournament appearance since 2011. Both the Tribe and UCF earned at-large bids to the tournament after the Knights lost to No. 25 South Florida (15-3-3) in double overtime in the American Athletic Conference semifinals. They have been especially intimidating in Orlando, only losing twice at home and defeating then No. 18 ranked USF in an Oct. 23 matchup.

There was little to separate the teams during regular time. The College defense held resolute despite UCF’s 15 shots. Senior goalkeeper Caroline Casey made four saves, including a superb sprawling stop on Carol Rodrigues’ late header. Senior midfielder Barbara Platenberg saved the Tribe by clearing a shot off the goal line after a corner kick scramble.

The College had its own chances to win with their 17 shots, but the College’s offensive keystones could not find the net.

The College had its own chances to win with their 17 shots, but the College’s offensive keystones could not find the net. Senior forward Katie Johnston saw her fierce header saved by Knights keeper Vera Varis and junior defender Clara Logsdon had two shots blocked.

The Tribe really found their feet in overtime, pushing the pace and drawing several fine saves out of Varis. Senior forward Leci Irvin, a catalyst for William and Mary, hit the target but could not beat the goalkeeper. Sophomore forward Sami Grasso’s shot was also stopped by Varis.

UCF could not find the groove offensively after the full-time whistle. The Knights’ offense failed to even push into the Tribe’s attacking third and Casey was carefree.

When the full-time whistle blew, the Tribe ratcheted up the intensity for the extra period.

When the full-time whistle blew, the Tribe ratcheted up the intensity for the extra period. Coach John Daly’s choices to take penalty kicks were intriguing. Three of his takers, Logsdon, senior midfielder Nicole Baxter and sophomore midfielder Rachel Moore, are experienced veterans and both recently received well-deserved places on the all-CAA first team.

The fourth taker, freshman midfielder Mackenzie Kober, saw time in all 21 games but only started 12. Kober and Moore did score in the Tribe’s loss to James Madison earlier in the week, which may have inspired Daly’s decision.

Daly’s choice paid off. Logsdon and Kober converted the first two spot kicks. Baxter could not score her shot, but Casey saved two Central Florida penalty kicks and one missed the target, leaving Moore to plant her penalty sweetly into the top-left corner. After a beat of her foot to the ball and the referee’s whistle, the Tribe rushed the field, mobbing near the center circle.

The spotlight once again fell on Casey. After earning the CAA’s Defensive Player of the Year award earlier this month, Casey made four saves during regular time, and put on a dominating performance in the shootout. It was her 11th shutout of the season.

Daly was optimistic about the Tribe’s chances going into the next round, where they will face No. 2 seeded Florida (18-3-1).

“I thought we had the better of things,” Daly told Tribe Athletics. “I’m very proud of our effort tonight.”

The Gators will be a tougher test than UCF. Florida swept the SEC regular season and tournament titles, knocking off defending champions Texas A&M in the final of the tournament. Current No. 6 in the country, the Gators edged Western Michigan 1-0 in the first round.

I thought we had the better of things,” Daly told Tribe Athletics. “I’m very proud of our effort tonight.”

For all of the Tribe’s players, including the seniors, this is their first trip to the NCAA tournament. They clearly weren’t overawed by the occasion in Orlando, but their scoring edge will need to reactivate for them to have a chance against one of the nation’s toughest teams.

William and Mary kicks off against Florida in Gainesville Nov. 20. Game time is set for 7 p.m.