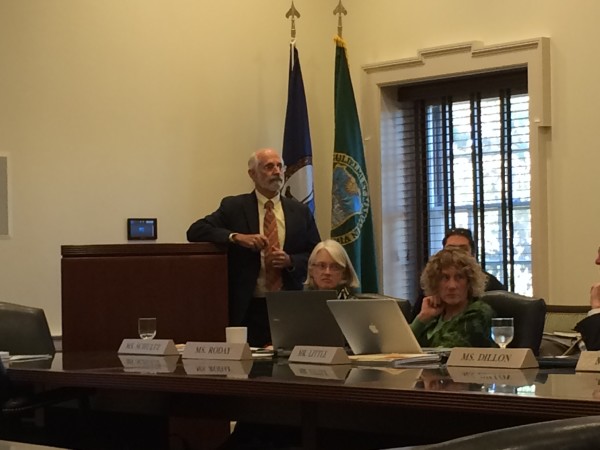 The Board of Visitors Committee on Financial Affairs convened Nov. 20 to pass three resolutions and discuss the financial reports for the College of William and Mary. The committee also heard financial reports from the Dean of the Virginia Institute of Marine Sciences and representatives of Wells Fargo, which manages the board’s investment portfolio. Furthermore, they discussed proposed changes to the Optional Retirement Plan for Higher Education.

The meeting began with a presentation by Senior Vice President for Finance and Administration Samuel Jones. Jones proposed three resolutions: the continuation of the “William and Mary Promise”, the receipt of the Consolidated Financial Report of The College of William and Mary in Virginia and Richard Bland College for the Fiscal Year ended June 30, 2015 and the receipt of the Financial Report of the Intercollegiate Athletic Department for the Fiscal Year ended June 30, 2015.

“The strength of William and Mary as a distinctive public Ivy is the overall intent [of the William and Mary Promise]; generate more money that we can invest in this institution in a variety of ways, into our people,” Jones said. “The rest of [the goals] relate to how we support in-state undergraduates.”

Jones also presented a draft of the College’s financial statements for fiscal year 2015, which he reminded the committee is subject to audits by the State’s Auditor of Public Accounts. According to the financial statement, the College reported a $39.3 million overall increase in net position from operations.

Jones also displayed comparison charts for the College’s tuitions and fees, comparing its tuition data to peers in Virginia and across the nation. He observed that the College offers significant savings compared to many of its peers.

During this presentation, President Taylor Reveley took the opportunity to comment on the College’s strength despite meager public support.

“The amazing thing in Virginia is that we have such a strong public system standing on such pathetic public support,” Reveley said.

All three resolutions were unanimously approved.

Dean John Wells then gave a report on the operating budget of the Virginia Institute of Marine Science. VIMS has an operating budget of $46.4 million. Wells presented graphs detailing the sources and uses of revenue, and emphasized that while a small percentage of funds were allocated to classroom instruction, most instruction occurs in research, which makes up 71 percent of the budget.

Wells discussed his intent to diversify, as well as increase, funding opportunities from new sources such as the National Institute of Health.

“What we aspire to do …  is to increase the diversity of what’s in this pie,” Wells said. “We’d like to pursue some granting opportunities that we’ve never really looked at before, and we’d also like to make the pie larger, obviously.”

“There’s a 95 percent chance that any cultured oyster that you eat in Virginia is a VIMS oyster,” Wells said.

Chief Human Resources Officer John Poma, ’86 MBA ’00 talked briefly about the proposed changes to the Optional Retirement Plan of Higher Education sponsored by Virginia Retirement System, changes which have drawn strong objections from College faculty and staff.  The proposed changes will shift management of the retirement plan and change the investment funds available to participants. Poma estimated the changes would affect 83 percent of instructional faculty, and he recommended opting out of the altered retirement plan.

“I think opting out is actually an improvement over the current plan,” Poma said. “Again as a new participant when I came in this past year, you’re selection choices are limited. So by opting out, you’re able to maintain the TIAA-CREF [Teachers Insurance and Annuity Association – College Retirement Equities Fund] platform who are able to offer a different investment lineup.”

President Reveley commented on the VRS’s handling of the changes.

“The VRS has handled this in about as ham-handed and feckless a fashion as could be imagined, ” Reveley said.  “If we had rolled the [William & Mary] Promise out in the same way, there would be no Promise, I would probably have been dragged off to the slammer.”

He added that the VRS still has not taken the chance to effectively make its case for the proposed changes. Poma said that he would be meeting with the VRS in the near future to discuss the changes.

Representatives of Wells Fargo, which manages the Board of Visitor’s investment portfolio, gave the final presentation. Their figures described the Board’s asset growth in the fiscal year 2015.