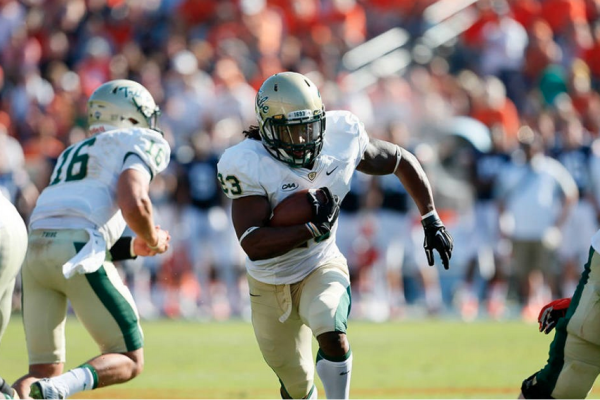 In light of the upcoming playoff game against Duquesne this weekend at Zable Stadium, I politely suggest that you keep this article near and dear to your heart to prevent the Dukes from gaining any advantage on William and Mary, and also recommend advising your friends to pick up an issue.

Although in all honesty, Duquesne has tape of the Richmond debacle this past weekend — essentially a paint-by-numbers kit of how to defeat the Tribe. And it’s really not that complicated. Run the ball, stop the run, and have a little luck.

Everything in head coach Jimmye Laycock’s ’70 offensive playbook hinges on establishing a solid running game. By rushing the ball early and often, the College forces the other team to put an eighth man in the box to slow down the tailback — usually junior running back Kendell Anderson — or at least bringing the safeties in closer to the line of scrimmage. As the College rushes out of the shotgun and pistol frequently, these safeties have to play the run even in these traditionally-passing formations with three wide receivers.

Thus, the other team finds itself in the unenviable position of respecting the run by bringing up the safeties even when the Tribe is in the pistol and shotgun. Laycock adds a dash of play-action passing, and voila, sophomore receivers like DeVonte Dedmon and Daniel Kuzjak are facing one-on-one man coverage, while junior quarterback Steve Cluley gets extra time and extra space because defensive lineman, reading run first, aren’t pinning their ears back to rush the quarterback while the linebackers are late dropping back into coverage.

All season long, it was a lethal combination, propelling the College to the third-best scoring and total offense in the Colonial Athletic Association. Yet the greatest benefit of the scheme was its conservatism. Anderson and senior tailback Mikal Abdul-Saboor didn’t fumble often, and Cluley, a fairly mobile quarterback behind a stellar offensive line, flourished in the play-action system to the tune of 13 touchdowns to two interceptions. The Tribe led the conference with just seven turnovers.

The College scrapped up a meager 95 yards on the ground. Anderson, previously the No. 1 rusher in the CAA before being overtaken by Richmond’s Jacobi Green, rushed 12 times for just 47 yards. The Spiders forced the Tribe to rely upon the arm of Cluley. Three interceptions later, with no touchdowns to offset, the Spiders celebrated their fourth straight win over the College.

The blame for the meltdown of the Tribe passing game rests on several players’ shoulders. Junior right tackle Jerry Ugokwe epitomized the struggles of the College’s offensive line with three holding penalties. Although the Spiders rarely blitzed, they still pressured Cluley all day by just sending four and dropping seven. The stat-book read just a single sack, but far too many pass plays ended with Cluley on his back and the pass incomplete. Kuzjak dropped a key third down pass, as did Anderson.

Another reason for the loss was the performance of the man under center. Cluley had his worst game of the season against the Spiders. In NCAA Quarterback Rating, Cluley finished with an 86.64 Saturday compared to a season average of 144.55 entering the game. Each of his three picks killed the Tribe’s momentum, the first two nullifying takeaways as William and Mary forced and recovered two Richmond fumbles, only to give it right back. The third ended the game.

On defense, the Tribe couldn’t stop a nosebleed, much less Jacobi Green who cranked out 218 yards on 36 carries against a soft College front seven. Senior middle linebacker Luke Rhodes led the team in tackles, another way of saying he was the one defender Green usually tripped over after consistent gains of 10 or more. Senior linebacker Zach Fetters, who has shown a penchant for big plays this year, forced one fumble, then disappeared, joining the Tribe’s pass rush in obscurity. Richmond quarterback Kyle Lauletta, a turnover slot-machine for the past two weeks, had all day to throw to the top receivers in the conference, the Spiders’ Brian Brown and Reggie Diggs, and the Tribe paid dearly for its lack of pressure with two touchdowns.

And then there’s the bad luck. On 3rd and goal from the Tribe’s 18, Lauletta hit Brown for the first touchdown of the game on an impressive catch right at the pylon. Two Richmond fumbles bounced out of bounds. Sophomore safety Mika Barta dropped a pick at the start of the game, and senior safety DeAndre Houston-Carson missed a blocked punt by inches.

Needless to say, if this Hyde-form of the Tribe shows up Saturday, the College will not be staying in the postseason for long.