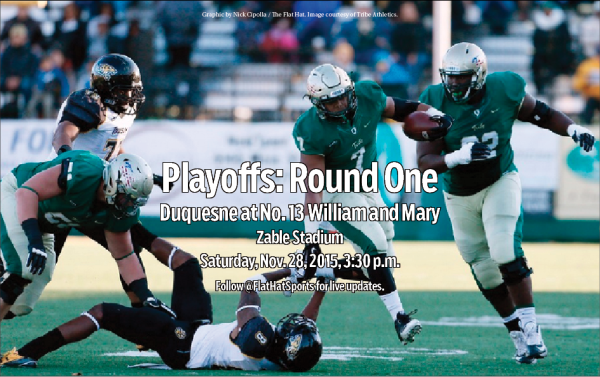 The big question as No.  13 William and Mary (8-3) heads into the NCAA Football Championship Subdivision playoffs for the first time since 2010 isn’t about how the team will handle postseason pressure. With the first round matchup against a relatively unknown Duquesne team at Zable Stadium, it remains to be seen whether the Tribe has stitched itself together after the catastrophe to end the 2015 season —  a complete 20-9 meltdown at archrival Richmond with the outright Colonial Athletic Association regular season title on the line. Such wounds don’t mend easily.

With the exception of special teams, spearheaded by the clutch kicking of sophomore kicker Nick Dorka, Jr. (who hit a career-long 51-yard field goal last week) and a fumble recovery by the punt team, the game against the Spiders could be described as a debacle. The offense couldn’t run and junior quarterback Steve Cluley threw three picks, more than double the total he had thrown in the previous 10 games this fall. The defense served merely as a doormat, permitting 218 yards rushing by a single player.

With the exception of special teams, spearheaded by the clutch kicking of sophomore kicker Nick Dorka, Jr. (who hit a career-long 51-yard field goal last week) and a fumble recovery by the punt team, the game against the Spiders could be described as a debacle.

Other intangible factors, such as allowing a touchdown pass into single coverage on a 3rd and goal from the Tribe’s own 18, and then head coach Jimmye Laycock’s refusal to burn timeouts to get the ball back on the Spiders’ final drive, suggesting a defeatist attitude in one of the biggest games of the season. Sure, the game was out of reach anyway, and yes, Richmond has the top receving target in the CAA, but even so, these aren’t the symptoms of a team burning with passion to make a run in the postseason.

The Duquesne Dukes (8-3) are the definition of a blank slate with which the Tribe can start anew. Duquesne earned an automatic bid for winning the Northeast Conference, a small, seven-team assortment — compared  to the 12-team CAA — that  includes such unknowns as Central Connecticut and Sacred Heart. The No. 2 finisher in the NEC, St. Francis, lost 35-20 to the CAA’s Towson Tigers, and this is particularly of note as the Tigers started 2015 with a bit of a whimper before starting a late win streak stopped by the Tribe in the Nov. 14 game. Even Duquesne, the flagship team of the conference, has a blemish against the CAA, losing 17-14 to 11th-place Albany (3-8) 17-14 Sept. 26. The Dukes also did not play a top 25 team all season, whereas the Tribe played four in total, winning three (Villanova, New Hampshire, James Madison).

Given their cupcake schedule, the fact that the Dukes have posted the No. 7 scoring defense in FCS football isn’t surprising with just 16.7 points allowed per game. For all the criticisms levied at the Tribe’s defense, the College has still proven adept at keeping opponents out of the end zone, as the Tribe ranks No. 12 in the country with scoring defense. Duquesne was never ranked at any point in 2015, and the automatic playoff bid from the NEC championship marks the only reason the Dukes find themselves in the playoffs. Numerically, it’s difficult to compare the teams given the polar-opposite level of difficulty in the schedule and the lack of gameplay between the schools, given that this is the first matchup between the programs in history.

The Dukes also did not play a top 25 team all season, whereas the Tribe played four in total, winning three (Villanova, New Hampshire, James Madison).

However, with a program-high 16 players for the Tribe earning 20 different All-CAA honors, a conference that is sending four teams to the postseason, and two players in consideration for STATS offensive and defensive player of the year (junior tailback Kendell Anderson and senior free safety DeAndre Houston-Carson, respectively), on paper the matchup looks like a joke. Of course the Tribe will win, so says the conventional wisdom.

After watching the Richmond game, I’m not so sure. The William and Mary that showed up last week would have a hard time beating anyone, and if six days isn’t enough to get that kind of mess out of the College’s system, then Duquesne could be set for a second round date with Richmond. But the Tribe has responded to defeats before this fall with dominant wins over Stony Brook and Villanova coming off of losses. A steady dose of Anderson up the middle and the Tribe should find itself back in familiar territory of relying on the run to win, especially in the familiar atmosphere of Zable, where the College went undefeated in the regular season.

Kickoff from Zable Stadium is at 3:30 p.m., the game can be followed on ESPN3 and following the sports desk on Twitter @FlatHatSports.