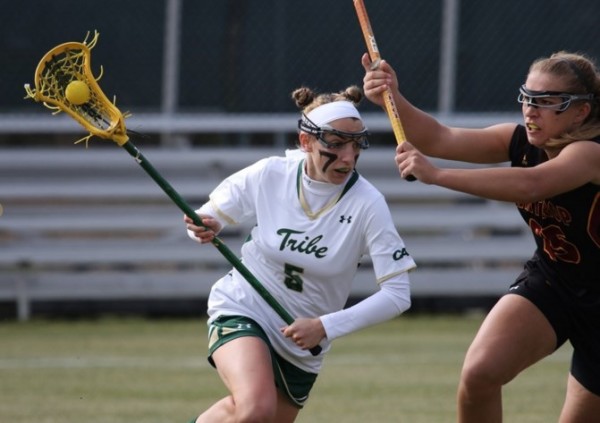 William and Mary continued its significant losing streak against top-ranked programs earlier this month as No. 7 Virginia defeated the Tribe 16-8 in Charlottesville, Va., March 2.The loss places the College at 0-21 against ranked opposition since 2012, and continues to extend its losing series record to the Cavaliers  to 33-17-1, a 33 percent win rate for the Tribe.  However, U.Va. (4-2) hasn’t dropped to William and Mary since 2002. To make a bad week worse, the Tribe (2-3) fell to unranked Winthrop on March 6 in a close 10-9 matchup at Martin Family Stadium.

After a thrilling win over Oregon to end February, the College seemed to be off to a hot start. Freshman attack Eloise Gagnon just earned Colonial Athletic Association Player of the Week honors, and the College had its first winning record after the season-opener for the first time since 2012. However, that momentum dissipated in the opening minutes against the Cavaliers. The College offense squeaked out just a single goal in the first half, after the Virginia defense rendered the Tribe ineffective for the first 25 minutes of play. Junior midfielder Shannon Quinn added the lone score.

Even that momentum was short-lived, as the Cavaliers pulled off an unassisted goal with just 24 seconds left to play before halftime. Though the College had parity in draw controls in the first frame (four for each team) and a negligible deficit in shots (12 to U.Va’s 16), the Tribe still found itself in a 6-1 hole after 30 minutes. To make matters even worse, all four of the College’s free position shot opportunities went to waste with none converted.

Though the College had parity in draw controls in the first frame (four for each team) and a negligible deficit in shots (12 to U.Va’s 16), the Tribe still found itself in a 6-1 hole after 30 minutes.

After the break, U.Va. pushed the advantage to 9-1 with 23 minutes remaining. However, the Cavaliers could not manage to get run-off time with a 10-point lead, as the College fought back to a 9-4 hole courtesy of a pair of goals by junior midfielder Lindsay Jenks and another by sophomore attack Abby Corkum. U.Va. rattled off four goals of its own to make it 13-4 with just 11 minutes remaining, likely putting the game out of reach for the William and Mary offense. The Tribe outscored the Cavaliers 4-3 to end the game, but eight players outside of the starting 11 for the Cavaliers got involved in the action, suggesting that Virginia was less concerned about running up the score than giving playing time to its inexperienced player. The 16-8 loss dropped the Tribe to 2-2 on the season.

The Winthrop Eagles (7-0) remain perfect in 2016 with the 10-9 triumph over the Tribe in Williamsburg, Va., on March 6. Historically, the College has dominated the Big South, posting a 9-2 record. Sunday’s matchup marks the first-ever between the two programs, as the Winthrop program is just in its fourth year. While the Eagles may be newcomers, they are no pushovers. In the six previous contests, the Eagles outscored its opponents 82-34 and outdrew its opponents 77-43. These opponents hold a combined 13-17 record as well.

Though Quinn drew first blood with a score just 36 seconds into action, the Eagles quickly recovered and swarmed on offense for the 24 minutes, soaring to 6-2 lead just before the half. Quinn and Jenks cut back into the lead before the half, reducing the deficit to just 6-5. Quinn also notched the first goal of the second half, earning a hat-trick and her twelfth goal of the young season. Sophomore midfielder McKinley Wade and junior attack Courtney Donovan earned the first lead of the day for William and Mary at 8-6. It would prove to be the last lead of the game for the Tribe.

Winthrop earned the next two draw controls, and managed a tie with just 15 minutes remaining. Defensive mistakes for the Tribe provided a free position shot to go along with an earned goal in a 30-second span, allowing the Eagles to tie the game at eight apiece. Another free position opportunity gave Winthrop the edge at 9-8.

Junior keeper Alex Lista, who started the entirety of both the U.Va. and Winthrop games, earned nine saves to end the day. Against the Cavaliers, she collected 14.

The College hit just 1 of 5 on its shots in the final 13 minutes. The Eagles managed at goal at 10:25 but did not strike again. The defensive stand for William and Mary proved to be for naught, as a single goal by Corkum defined the total offensive production over the closing minutes.

Winthrop held an advantage in some major categories to end the game, holding a 25-19 advantage in shots and a 18-23 margin in turnovers committed. The Eagles’ aggressive play resulted in a chorus of whistles to the tune of 56 penalites to the Tribe’s 33. Even though the College dominated draws 15-6 with heavy contributions from Jenks and Corkum and successfully cleared the ball 11 of 12 times after a shot, the Tribe simply could not find a way to turn possessions into shots. Free position shots again proved to be a weak point for the College, converting just 5 of 10 into points. Winthrop only scored 2 of 4, but both scores came late in the game,  proving to be daggers to the College’s comeback effort.

Junior keeper Alex Lista, who started the entirety of both the U.Va. and Winthrop games, earned nine saves to end the day. Against the Cavaliers, she collected 14. She appears to be the starter for the remainder of the season after head coach Hillary Fratzke rotated goaltenders in the prior three games.

Up next for the Tribe is the challenge of Old Dominion (4-1) and the chance to return to .500 on the season. The College has won two of the last three meetings with the Monarchs, including 2015 and 2014. The game will be played at Martin Family Stadium in Williamsburg at noon March 10.