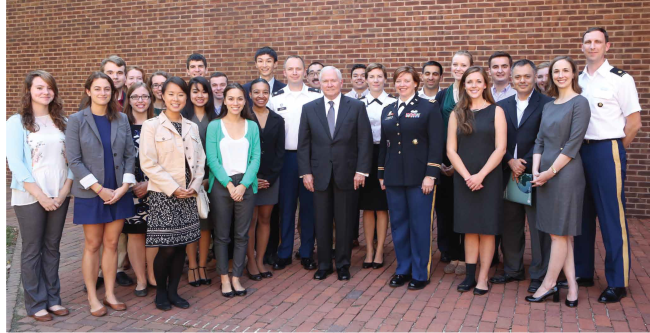 Following a year of brainstorming and research, the Project on International Peace and Security research fellows presented their projects Friday, April 8. Their projects covered topics including sand as an emerging source of conflict in East Asia, growing instability among East Bankers in Jordan, and the link between foreign aid and conflict.

PIPS research fellows spent much of the fall semester brainstorming security issues in different areas of the world and potential research topics. They dedicated the spring semester to writing their formal policy papers, known as white papers, and preparing to present their research findings. The group has met for three hours each week since August, and members have spent time outside those group meetings working with professors, policy experts and each other.

The final step of preparing for the symposium started in March, when the group submitted the final versions of their white papers. Since then, they have practiced presenting their projects in front of different groups at the College of William and Mary to get feedback on their research.

Research fellow Emily Wasek ’17 said that the idea for her research project came from working with PIPS director and international relations professor Dennis Smith. According to Wasek, the original idea came from something Smith overheard on National Public Radio.

“One morning when I went to visit Professor Smith, he mentioned to me that, while listening to NPR on his way to campus, he had heard a report about how gang violence against women in El Salvador had become so severe that many of these women had essentially become prisoners within their own homes,” Wasek said in an email. “Curious, I asked him to tell me more about what we had heard, and soon we became engaged in a dialogue about how to effectively solve this problem.”

After that initial meeting, Wasek began to research the Women of Liberia Mass Action for Peace, a women’s group responsible for peace negotiations that lead to the end of the Second Liberian Civil War. As her research developed, she became invested in the idea that by fostering the development of women’s networks, the United States could both provide marginalized Central American women political empowerment and mitigate growing gang violence in Central America. The final component of her research focused on the ways mobile phones could enhance women’s political mobilization.

Another research fellow, Darice Xue ’15 M.A. ’16, examined the link between foreign aid and conflict. Specifically, Xue looked at how a lack of coordination among donors reduces the efficacy of foreign aid by exacerbating corruption. She used new data on Chinese development finance in sub-Saharan Africa to examine the relationship between conflict in African countries and the share of aid provided by donors.

Xue, who has worked at AidData since her first year at the College, combined her experience with AidData and with PIPS to develop her project. Xue aims to raise awareness about the lack of coordination of foreign aid through her project.

“My project was a culmination of my research experience at William and Mary,” Xue said. “This is my last year here, and I’ve been involved with PIPS and AidData since my freshman year in 2012. I wanted to merge the gap between development and security. PIPS has been good working on all types of security, including human security, where development falls, and I used the data I have been working with at AidData to really combine the two.”

My project was a culmination of my research experience at William and Mary,” Xue said.

Research fellow Caper Gooden ’16 built her project on a topic she found fascinating in previous classes — Jordan, a country in the Middle East that is often left unaddressed in discussions on international security.

“In classes that I’ve taken about the Middle East, Jordan is often an overlooked country, reduced to one or two sentences when discussion other regional events, and I’ve found it fascinating for that reason, especially since the United States seems to rely on its partnership with Jordan in several ways,” Gooden said in an email. “When I was brainstorming a topic back in September, I decided to dig deep into the news from Jordan to see if there were any emerging security threats. International news and reports on Jordan are sparse, but I was sure that I could find something. Once I started looking into Jordan’s economy, I realized that things weren’t adding up, so there had to be underlying problems. As I kept digging, my project evolved into what it is now.”

Gooden’s project examines how Jordan faces the threat of economically driven instability. Specifically, it looks at how liberalization policies have harmed East Bankers, which could possibly end their support for the Hashemites. She argues that the United States should help create a source of well-paying jobs for East Bankers by encouraging the development of Jordan’s IT industry.

Other PIPS research fellows who participated in the symposium include Amanda Blair ’16, Mitchell Croom ’16, Catherine Crowley ’17 and Jimmy Zhang ’16. Moving forward, the group will be presenting their white papers Friday, April 15 at the National Press Club in Washington, D.C. During the day, students will also be sharing their projects at organizations such the Atlantic Council, USAID and New America.

“While presenting at the campus symposium was a thrilling milestone, it’s not the end of the road,” Wasek said in an email. “Our day will definitely be a whirlwind. In the early afternoon, we’ll be splitting up to hold informal lunch talks at three amazing institutions: the Atlantic Council, USAID, and New America. Then, later in the evening, we’ll present our research to a larger audience at the National Press Club for our annual Washington D.C. symposium. It’s something to look forward to that’s both extremely exciting and nerve-wracking.”

While presenting at the campus symposium was a thrilling milestone, it’s not the end of the road,” Wasek said in an email.

The research fellows have diverse hopes about how quickly their policy proposals should be implemented. Wasek believes that gang violence will only escalate if her research is not implemented immediately. Gooden, however, acknowledges that the security problem in Jordan is a future problem, as the region is currently stable. Ideally, she said she would like to share her research with the Department of State and USAID, but acknowledges that it is a project that warns of a distant threat.