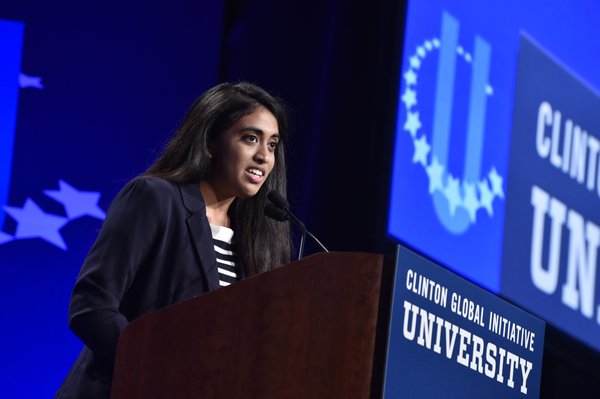 The fiscal future of our generation is up to us — or at least this is the ideal that a team from the College of William and Mary has made its mission to uphold. The College’s team won the fourth annual Up to Us competition, which sought to educate and engage millennials on the fiscal challenges of the United States.

Up to Us, a non-partisan program sponsored by the Peter G. Peterson Foundation, the Clinton Global Initiative University and Net Impact, aims to empower students to raise awareness about the United States’ long-term fiscal and economic health in a competitive and educational campaign. The competition has grown in scope from just 10 colleges and universities in 2012, when it debuted, to 53 in 2016.

The core team, led by Sruveera Sathi ’16, was made up of members of the College’s Net Impact club, housed in the Mason School of Business but open to students from all majors. Hannah Cannon ’18, Aastha Uprety ’18, Octavia Goodman ’16, Merci Best ’17, Sudeep Kalkunte ’16 and Arjun Rastogi ’18 rounded out the team.

The team had the opportunity to travel to Berkeley, Calif. to attend the annual CGI University conference and be recognized for their efforts, in addition to attending the variety of panels and networking with other college students from across the country involved in Up to Us.

According to Goodman, this was an invaluable opportunity.

“Meeting people that were there from Up to Us, and hearing what other schools did, was pretty cool because it gives us ideas of what we can do next year and how we can be more creative,” Goodman said.

In addition to this recognition, the team received a $10,000 cash prize, will travel to Washington, D.C. to meet with a range of policy organizations, civic groups and leaders from across the political spectrum to discuss millennials’ stake in fiscal issues, and will attend the Peter G. Peterson Foundation’s 2016 Fiscal Summit May 11.

The Up to Us team organized a plethora of activities throughout the year, beginning with My Two Cents Day in October, a campaign which encouraged students at the College to send a signed pledge to their elected officials telling them about the issues they care about.

The bulk of the campaign took place in February, with the “Great Debt-bate,” which brought together the Young Democrats, the College Republicans, the College Libertarians and the College Socialists for the first time in College history to debate fiscal policy. Other events included “Dance the Debt Away” in partnership with Syndicate, participation in the DEF[X] conference held at the Mason School of Business, and the hosting of weekly educational webinars on different topics related to the national debt.

According to Sathi, the three main sectors they aimed to address in their programming were education, healthcare and defense, which take up substantial portions of government spending.

“Millennials are the ones who are least involved in the conversations about these topics; however, as the up-and-coming generation, we will have to make decisions about our fiscal future,” Sathi said.

Sathi contends that one of the reasons that their initiative was successful was that they were able to promote dialogue and bridge the gap between two populations that were not interacting: millennials and the current generation of leaders. Sathi, Cannon and Best travelled to the Virginia state capital for the College’s annual Road to Richmond event to promote this dialogue.

“We spent an entire day lobbying to our elected officials, and so we took our Up to Us shirts with us. We made sure to talk about Up to Us with a lot of the senators that we met,” Sathi said.

We spent an entire day lobbying to our elected officials, and so we took our Up to Us shirts with us. We made sure to talk about Up to Us with a lot of the senators that we met,” Sathi said.

According to Uprety, one of the reasons that the national debt is not at the forefront of many millennials’ thoughts is because it lacks the sense of urgency other issues have. For Uprety, it is important to fill this silence and make our generation’s voice heard on the pressing issue of the national debt, because it has a tangible effect on our lives.

“The economy is something that’s very important to care about; it’s real and it affects people,” Uprety said. “And the national debt affects the economy because when we’re busy paying off interest on that, we can’t really invest in other things.”

However, the team said they hope that this recognition is only the beginning of a continuous effort to engage the campus community in the issue of the national debt, and that students at the College in future years will use the momentum from this recognition to take this initiative even further.

Sathi said that the team was pleasantly surprised by the success of the campaign, which surpassed their expectations, both in terms of campus involvement and of recognition.

“What was really encouraging was, as we were doing this in February, we had students reach out to us, asking how they could be involved,” Sathi said.

What was really encouraging was, as we were doing this in February, we had students reach out to us, asking how they could be involved,” Sathi said.

Sathi explained that, while they do not have definite plans for how they will allocate the cash prize, they plan to donate a majority of it to various programs in the Office of Community Engagement. According to Sathi, the team’s hope is that this is just the seed of a larger movement and will bring millennials of all backgrounds together to take control over the pressing issue of the national debt.

“Just because this competition is over doesn’t mean we need to stop raising awareness about this, because it affects people in all walks of life … I’m actually a neuroscience major, and I want to become a medical professional in the future, and I know how being aware of fiscal issues will make me a better physician in the future,” Sathi said. “So this issue will relate to you – it affects everyone.”