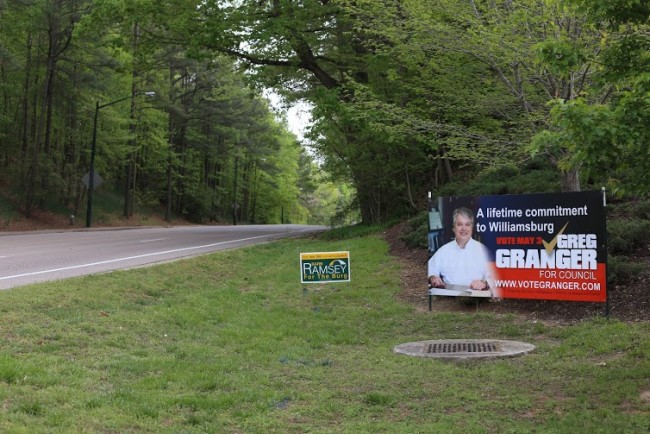 Candidates for Williamsburg’s City Council identified the City’s demographic imbalance as an important issue for the upcoming election, each focusing on ways to retain and attract a millennial population.

Each of the five City Council hopefuls identified the City’s small millennial workforce as an issue for Williamsburg moving forward. The candidates each pinpointed issue areas and proposed solutions in building attractive housing stock, fostering business opportunities, improving night life and drawing in current students of the College of William and Mary.

For real estate owner and life-long resident Greg Granger, the City of Williamsburg needs “absolutely, absolutely without hesitation” to improve retention of College of William and Mary graduates.

After their four years of college, Granger said students are ready to go out and conquer the world, but he thinks they should look a little closer to home — right here in Williamsburg. However, Granger admitted that Williamsburg may not be the most attractive place for recent graduates, citing a housing shortage and need for more business opportunities.

On the housing side, Granger supports investing in apartments and other housing that is attractive to young professionals. In terms of business, Granger said he sees a greater place in Williamsburg for something the College already excels at: research.

“I think we need to talk about inviting some more business models to the community for research, various types of research,” Granger said. “I think research is just a great avenue to explore because it doesn’t put a lot of strain on the infrastructure of the community … Brainpower is a great asset.”

I think we need to talk about inviting some more business models to the community for research, various types of research,” Granger said.

Another issue to Granger is downtown life. Williamsburg does not currently have a great social scene for millennials, according to him. To smooth out the demographic imbalance among residents, Granger supports facilitating a more vibrant downtown scene and expanding other events like the Winter Blues Festival.

To Vice Mayor Freiling ’83, the only incumbent in the race, building the right housing is critical. Since millennials cannot typically afford single-family homes right after graduation, Freiling said Williamsburg needs living space more attractive and feasible for that younger population.

“What we don’t have a lot of are the closely coordinated, safe, small, apartments which are within walking distance of shopping, dining, entertainment,” Freiling said.

Another deterrent Freiling cited is the lack of a social scene, which College graduates can currently get more easily in bigger cities.

“It’s about having a sense of community; it’s meeting people, it’s making new friends, it’s feeling like a part of something, and you can’t really have that until you have a critical mass of customers,” Freiling said. “So we need to get more folks to stay here so we can get more businesses coming in to cater to them, and I think it all tends to then build upon itself.”

To attract and grow these businesses, Freiling sees a greater role for Williamsburg in supporting start-ups and research opportunities, citing successes with AidData and Launchpad: The Greater Williamsburg Business Incubator, a joint venture between York County, James City County and Williamsburg.

Right now, the housing stock around town is not conducive for young professionals or even young grads to want to live here,” Zhang said.

To Zhang, if Williamsburg wants to keep more graduates of the College, it needs to take action before commencement: Williamsburg should focus on involving and engaging current students in local government.

“I think the City needs to come to campus,” Zhang said. “This campus represents 50 percent of the city’s total population.”

Agreeing that the disconnect between students and Williamsburg makes it difficult for Williamsburg to retain recent graduates, Zhang said that while in office he would make sure Williamsburg hosts town halls, meetings and workshop sessions right on campus.  Local resident and landlord Barbara Ramsey ’75, who is also running for a City Council seat, prefers a more realistic assessment of City Council’s ability to correct Williamsburg’s demographic imbalance.

“Part of that goes back to what the role of City Council is,” Ramsey said. “City Council’s role is to set policy, it’s not to implement it … You have to take into account too as far as Williamsburg and the size and what it’s capable of.”

Ramsey said that Williamsburg’s low number of young professionals is due to a combination of housing, downtown life and other issues. Continuing to discuss her personal experience as an alumna, Ramsey said connection with the College is an important way to retain College graduates.

“I think that it’s creating an environment that is an open environment, and one that, when students have had an opportunity to go to other places, that they want to come back,” Ramsey said.

When asked whether she had particular policy ideas for smoothing out the demographic balance, Ramsey said she supported the current City Council’s work.

“I think that the City and City Council is fairly realistic. I think perhaps some of the candidates who are running for City Council may not be in that same mindset,” Ramsey said. “I think that, you know, everyone who graduates from William and Mary isn’t going to want to come back here.”

Economics professor and member of the Williamsburg Planning Commission Elaine McBeth says she recognizes many students of the College will move away after graduation; instead, the City should focus on attracting a young professional force regardless of their origin.

“I don’t think it’s an issue of keeping our undergraduates here, but providing good jobs and housing opportunities so that we can encourage that demographic that is mid-20s to mid-30s—people that are moving into careers and finding places to live—to actually stay here,” McBeth said.

Although pointing out that Williamsburg does have millennials working in the City, McBeth noted many are opting to commute, living elsewhere.

To counteract this, McBeth proposed that the City should work more closely with the human resources offices at large employers to retain the middle demographic.

Recalling her own experience as a 26 year old moving to and living in Williamburg, McBeth noted that there is a role for more mixed-use housing—most young people will have a difficult time affording the City’s single-family homes.

As for Williamsburg’s current attempts to foster an environment attractive to millennials, McBeth agreed that the City is working hard, but that there is still much to do.