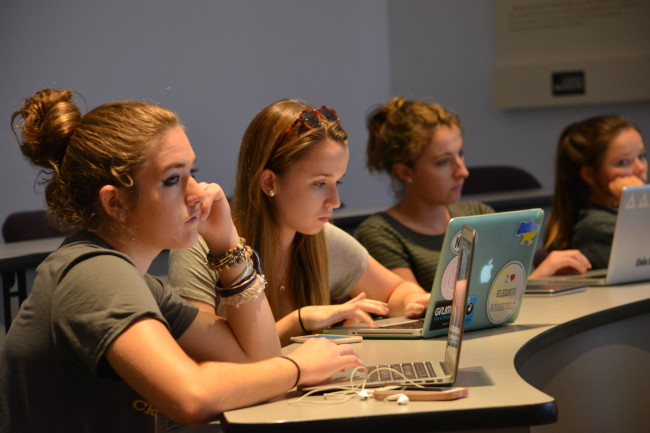 After discussing the recent breakup of pop-star Taylor Swift and Tom Hiddleston, the Student Assembly senate launched into discussion about new legislation aimed at improving transparency and outreach.

Three new bills address issues of SA transparency, outreach and participation in diversity initiatives. Sen. Alexis Payne ’19 and Sen. Shannon Dutchie ’19 introduced these bills, and the senate will discuss and vote on them next week.

The SA FAQ Act, introduced by Dutchie, would dedicate a day before Oct. 1, 2016 to educate the student body about the role and power of SA. Dutchie said she hoped information from this event would be shared with students online — through social media and Facebook livestream — as well as in person and on printed flyers.

Ideally, Dutchie said, this event would happen  before the Class of 2020 elects their senate representatives and class president.

Sometimes our area of expertise can be a bit confusing. We have executive and legislative branches, and the executive, specifically its finance components, can be tricky for students to understand,” Dutchie said.

“Sometimes our area of expertise can be a bit confusing,” Dutchie said. “We have executive and legislative branches, and the executive, specifically its finance components, can be tricky for students to understand. We want to students to know what we can and can’t do — someone wanted us to get rid of Sodexo, but that’s not something we have control over.”

In the past, SA has hosted events like “What Can SA Do for You?” and “What Else Can SA Do for You?” to provide information to the student body on the rights and responsibilities of SA. Last year, senators introduced the SA & Chill Act, which established office hours led by the senate’s standing committees.

These events are all aimed at improving transparency, one of the key issues in March’s SA presidential election.

Chairman of the Senate Danny O’Dea ’18 assigned this bill to the student life committee for further review.

At least two senators would attend each of the diversity initiative meetings, take notes and then compile a monthly report of upcoming events to present at weekly senate meetings.

The second part of this resolution charges senators with maintaining communication with SA Secretary of Diversity Initiatives Erica West ’17.

“I think this bill will really encourage senators to pass more meaningful bills on diversity issues,” Payne said. “It is especially pertinent given our current political climate. It is important that we are creating a safe and accepting space.”

Dutchie and Payne also co-sponsored the I AM W&M Act, which allocates $264 from SA reserves for this semester’s Queer Night of Expression, two table talks and an I AM W&M ice cream block party.

No new legislation was introduced regarding the SA’s purchasing of blue books for exams, but McKiernan noted that the executive branch was looking into more cost-effective ways of providing this outreach service to students. When asked if funding blue books was something the SA could stop doing, O’Dea said this service was very important to the student body.

“We have been doing this for a long time,” O’Dea said. “Students used to have to go and buy them at the bookstore for each of their exams. If we stopped this it would cause a huge uproar. Even if students don’t know we do this, it’s something they appreciate.”