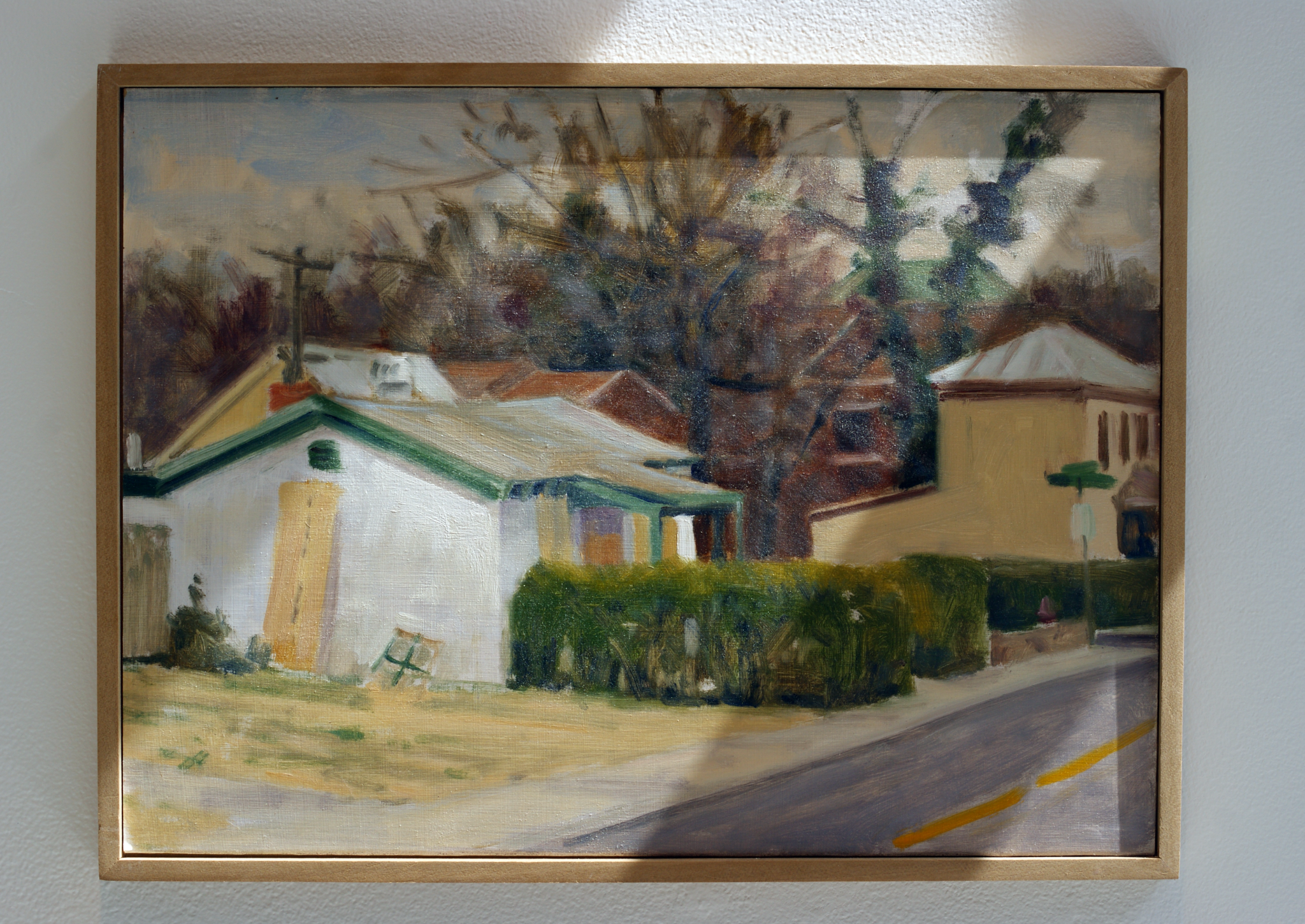 Richard Crozier doesn’t have a name you would recognize. You probably didn’t know 30 years worth of his works, titled “Repository of Missing Places,” are sitting, waiting with bated breath, to be seen by you in the Andrews Gallery. I am now realizing most of you probably don’t even know where the Andrews Gallery is. Prepare to be educated.

Crozier mostly paints landscapes of Charlottesville, Va. Before you sigh and say, “Ah yes. I know what landscapes look like. I’ve seen them all! Landscapes are boring scenes for old people when they can’t go outside anymore. Do not come at me with this art!” — stick with me for a second.

Crozier’s landscapes are not your traditional dewy sprawling hills and glinting summer suns that beat you over the head with beauty and serenity and nature. In fact, Crozier subverts this. He depicts dirt and dumpsters and street signs and half-empty car lots. He paints the ugly side of landscapes, the side that most artists hide behind their piercing mountains or gleaming lakes. He puts these ignored sites on view for all to see, and supposedly, appreciate.

And he does it while sitting in his car. He parks his car, pulls out a canvas and goes to work in the front seat, allowing paint to splatter on the interior, as his car becomes his studio.

Crozier’s landscapes are not your traditional dewy sprawling hills and glinting summer suns that beat you over the head with beauty and serenity and nature.

But the question becomes: ‘How successful is this art?’ Is Crozier really creating art if it purposefully showcases something that’s not beautiful? What’s the big idea?

Here is where I find being in the Andrews Gallery particularly helpful. As you walk into the second compartment of the gallery, these petite scenes of daily life surround you. A corner of an ashy, unremarkable house. A vaguely wet street with a few scattered cones. The back of a dump truck, black and heavy with trash. These places are unknown but somehow familiar. We have all seen them; we know them like the back of our hand but prefer not to think of them. To us, these scenes are secondary, forgettable, temporary.

But as you let these scenes inundate your senses, expecting the boredom to commence at any moment, you surprisingly find yourself wanting more. Trust me, I was surprised too. You look back at it, but you’re not sure why. See! Art galleries can be exciting too: mystery and intrigue around every corner. (Note: Only one mystery and/or intrigue guaranteed per entry of Andrews Gallery, as there is only one corner to come around.)

This phenomenon might have something to do with Crozier’s technique. He was trained as an abstract artist at the University of California, Davis, which adds to the unique flavor of Crozier’s landscapes. Rather than just replicating the focused reality that he observes, Crozier’s landscapes act as art objects. The interest occurs in the depiction of the image, but also in the treatment of the image from the artist’s perspective. The landscape is now a product of both reality and the artist.

His handling is delicate yet forceful, as the thick strokes allow the image to vacillate in and out of clarity. And this is where he hooks you. Viewers want to grasp the image, to understand it completely, but they can’t. And I think Crozier would argue that they shouldn’t, because these scenes are constantly flying past our perception, and to hold them indefinitely is to fight their nature.

His works capture the transitional reality of the world around us that makes itself known in the tiniest details. Our own landscapes flutter on the boundaries of  liminal space, just asking us to notice them. And when we finally do, we find ourselves hesitantly liking it, even though it isn’t Beauty with a capital B. We recognize our own intermediary experience, and see that it’s not so scary. In fact, it’s the most normal thing in the world.

Crozier succeeds in allowing a viewer to find comfort and, dare I say, a little bit of beauty, in facing the reality that life is transitional and ugly and made up of dirt piles, and that’s ok.

Basically, don’t hate on the construction around campus — that’s all Crozier and I are saying.