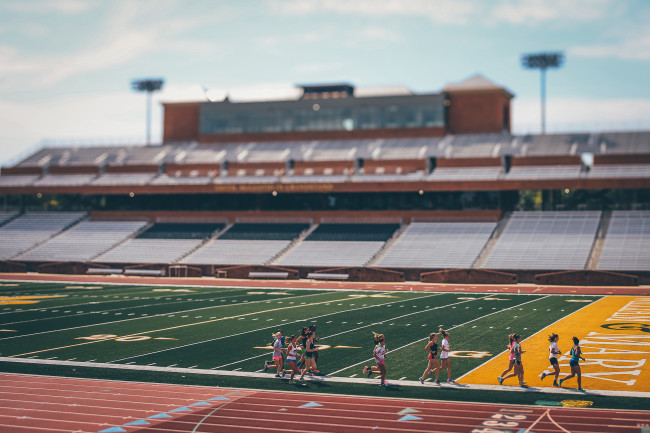 Walking across campus, students might notice a field of dirt between The Daily Grind and the Student Health Center, or construction workers adding finishing touches to Zable Stadium.

Over the course of this academic year, the College of William and Mary will be finishing up these construction projects and finalizing designs for the next round of renovations. This construction involves adding new buildings, doing “gut renovations” of existing structures, and working to meet the Americans with Disabilities Act’s guidelines for people with disabilities.

The $27 million renovation project will be completed in time for the first football game hosted at the College. This project included removing the old bleachers and then adding in new ones behind the end zones, building a new concourse behind the west wing of seats, building luxury suites on top of that concourse, creating new sections of seats designed to accommodate wheelchairs, and improving the president’s and press boxes.

According to Director of Facilities, Planning and Design Wayne Boy, the new concourse is very modern but still fits with the aesthetic of the historic campus.

“I told the architect that we really needed to keep the aesthetic of historic campus or we would start over,” Boy said. “We have the bricks and the slate roof … we are the only stadium in the country with a slate roof.”

Much of this project was finished over the summer, but completion was delayed by last-minute electrical problems. Boy said that these electrical problems will be taken care of by the first home game. Tribe Athletics hosted an open house at the stadium Sunday, Sept. 4.

Another more routine change was made to the stadium, which was replacing the turf field and painting a new Tribe logo on the center of the field. While the logo is a new addition, the turf field is just a newer version of the existing field surface. According to Boy, these fields typically need to be replaced every eight to 10 years.

In order to protect the long-term future of Busch Field and the health of the athletes using it, the College bought a new AstroTurf field. Because many of the College’s recreational sports teams use Busch Field, the field was being destroyed by use.

Boy said that the new field will be ready for use by the end of September.

While not as costly or as noticeable as other construction projects on campus, students frequenting William and Mary Hall might have noticed roped-off sections of construction where the ticket booths used to be. In the next few weeks, new ticket booths as well as more seat spaces for people in wheelchairs and their companions will be added.

The government and economics departments found a new home at the start of this semester in Tyler Hall after being housed in Morton Hall for several years. This project was a gut renovation, meaning that the entire interior of the building was rebuilt.

Beyond meeting the Americans with Disabilities Act’s guidelines to add accessible entrances — which was done by adding a ramp to the left of the main door — the project also removed all tiered classrooms and resized the classrooms to mid-size and seminar-sized classrooms. The first two floors of the building are home to classrooms, and the third and fourth floors are office spaces for faculty. Additionally, the $16.4 million project included the addition of a skylight, tiered staircases and a large space in the entryway of the building to be used for the departments’ social functions.

According to government and public policy professor John McGlennon, the renovated building has improved the morale of the government department.

We have said for a long time that the move to Tyler should give us a facility to match the quality of our students and faculty,” McGlennon said in a press statement.

“We have said for a long time that the move to Tyler should give us a facility to match the quality of our students and faculty,” McGlennon said in a press statement. “This building does not disappoint. It has already reinvigorated the departments and programs housed there even as the finishing touches are being applied.”

According to Boy, the ISC-3 space is “one hell of a laboratory facility” and is one of the most modernly-designed buildings on campus.

This building is completely new and is the third installment in a multi-part series of Integrated Sciences Centers. Last spring, the College officially got approval for funding to begin designing and building the fourth installment.

Besides the machine for science, the ISC-3 comes with a new Starbucks café and laboratory space that is completely vibration free, something that no other science building has been able to offer at the College. ISC-3 also gives the applied sciences department an official home. The building cost $74.18 million and is expected to be finished Sept. 7. While much of the building is already in use, electrical difficulties in the main lecture hall have delayed its use.

All that is completed for this project is the underground utilities, but the projected completion date is February 2018.

Art and art history professor Eliot Dudik was the mastermind behind the new darkroom in Andrews Hall. He coordinated and bought most of the equipment and converted old studio space. Dudik did most of the work, according to Boy, although the College did give $46,000 in addition to art department funds  for finishing touches on the $146,000 space.

While there is not a set completion date for the project, installation of the equipment is almost done.

The first step in completely renovating Landrum Hall, picking the architect, was recently finished. In May, design for the hall will be finished, and ideally renovation will begin after the 2017 graduation. This project will last for a full year, following the model that Senior Vice President for Finance and Administration Sam Jones said the Board of Visitors preferred.

When we needed to renovate we used to do it over the summer and then let students move back in during the school year, which meant that it would take multiple summers to finish a project,” Jones said.

“When we needed to renovate we used to do it over the summer and then let students move back in during the school year, which meant that it would take multiple summers to finish a project,” Jones said. “The Board of Visitors recommended just doing 15 month projects and taking a dorm off-line for the whole time.”

One of the major changes that will be made to Landrum is the addition of air conditioning; the College recently laid lines for a fourth air cooler that will make this possible.

Demolition to the 1988 wing of One Tribe Place was scheduled to begin in the summer of 2016 but was delayed to accommodate the wishes of others involved in the redesign process. It was apparent leading up to the demolition that re-finalizing the set electrical design for after the demolition would be necessary. Now, once the electrical design is complete, demolition will begin between the hours of 9:00 a.m. and 5:00 p.m. and should be completed by graduation in May 2017.

The Hickson Experiential Learning Center is a 12,400 square foot addition to the Marshall-Wythe School of Law that will give law students new space to hold clinics for community engagement and will also include another mock trial space.

This addition will be connected through a glass walkway. The project is scheduled to be completed in January of 2017 and cost $7.308 million.

On efforts to modernize construction, the building will have glass sides adjacent to Adair Hall and will have brick sides facing toward old campus.

If all goes according to plan, construction on the new utility plant will be completed by February 2018.

Over three years ago, the College picked a designer for their proposed performing arts center, which would provide temporary stage and rehearsal space while Phi Beta Kappa Memorial Hall is renovated.

At this time, it is not clear if the College will purchase space off campus or renovate an existing campus building for this purpose. Additionally, there will be space for set construction in design, potentially near the Dillard Complex.

Ideally, construction will begin in 2018 and last for one year Boy said.