Home Latest News Board of Visitors After delays, BOV to hear six-month timeline for OTP renovations 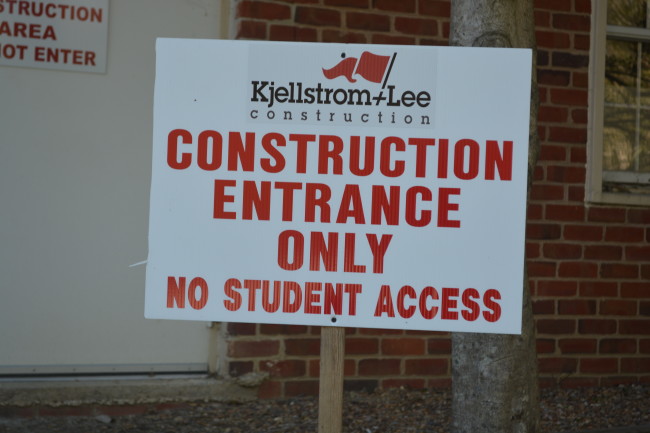 One Tribe Place renovations will be proposed at the Board of Visitors meeting later this week, the second push to renovate the unlivable wing. Earlier renovation plans were temporarily halted because of damage that was more extensive than was originally thought, despite the due diligence that was performed at the time of purchase.

When the College of William and Mary bought the Williamsburg Hospitality House in 2013, administrators already planned to make changes to the property now known as One Tribe Place. Administrators will present a proposal for the property’s renovation during this week’s Board of Visitors meeting.

When the building was purchased, it was segmented into three pieces: the original hotel, the 1984 wing and the rooms under the hotel, such as the ballroom and the restaurant. The College purchased the building in May 2013, and approximately 300 students moved in that August after minor renovations, such as building new fire-safe walls around the lower segment of the property to ensure fire safety.

However, the segment of the property known as the 1984 wing, which was used as hotel rooms while the property was a hotel, was not up to the College’s building code. At that time, the College planned to make necessary renovations to bring the ballroom, meeting rooms and restaurant spaces up to building code and make those spaces accessible to student organizations. However, due to budgetary constraints, the College has not yet been able to pursue those renovations.

According to Senior Vice President for Finance and Administration Sam Jones ’75 M.B.A. ’80, an investigation of the property after the purchase of the building revealed that water infiltration had made those rooms uninhabitable.

Jones said that he will propose a demolition plan for the 1984 wing at this week’s BOV meeting. Although a specific timeline has not yet been approved, he said he hopes the demolition will be done within six months.

In the future, after the proposed demolition, the College administration will make a decision on how to rebuild the space. Past attempts to contain the water infiltration revealed a layer of mold beneath the wallpaper because the windows were not sealed properly.

Following Jones’s proposal, Director of Facilities, Planning, Design and Construction Wayne Boy said that the renovation plan will include challenges directly related to the 1984 wing, as well as other necessary renovations the property needs.

“The first thing is handling the massive water infiltration — we either have to stabilize those floors and repair them, or we have to demolish them and then repair it,” Boy said. “Once we do that, keep in mind it’s a six-story building. It has two layers of garage, a floor of assembly space and then three floors of rooms above it. We will have to come up with a roof for the garage; that’s issue number two. That roof could either be a hard roof or it could be a membrane layer that we put under the ground. Also, when we tear the building away, the back section is separated by a courtyard. The two attachment points are stairwells, so we will have to re-clad those stairwells and restore that facade.”

Additionally, Boy said that they will need to install new fire alarms and fire sprinklers in the garages to keep them up to fire code. The room that supplies power to the entire building and hosts the switchboard will require repairs for water leaks in that room.

Moving forward, when the College decides to rebuild the 1984 wing, it will need to be brought completely up to code. This will involve testing electrical and heating utilities in the ballroom and adding public bathrooms. There is no immediate timeline for rebuilding the 1984 wing, and plans for rebuilding will rely on the availability of funding.

“There’s always a planning cycle that occurs,” Jones said. “That planning sets very detailed specifications for what you have to tear down, how you tear it down and what you rebuild in its place. When we go into the ballroom spaces for example, we will have a lot of engineers come in, then we will hire an architect and engineer and they will do detailed plans. Then we [will] also look at the layout of the space and we might want more rooms, we might want fewer rooms. You do all of that before you hand it over to construction.”

When the property was the Hospitality House, the 1984 wing was composed of 78 hotel rooms.

According to Jones, future renovation plans could involve adding or subtracting rooms from the space.

However, when it comes time to make a decision for renovation following the demolition, Jones said that a key factor will be whether it is more important to deal with rebuilding the 1984 wing or renovating Landrum Hall.

The choice between renovating Landrum and rebuilding the 1984 wing will also involve input from the Student Affairs and Residence Life departments.

According to Vice President for Student Affairs Ginger Ambler ’88 Ph.D. ’06, maintenance and dorm improvement projects happen constantly on campus. She said there are many factors involved in these projects.

“Among the factors we discuss are the conditions and needs of particular buildings, the level of student demand for various kinds and locations of on-campus housing, the relative costs of different renovation projects and the amount of available funds,” Ambler said in an email. “Landrum has long been identified as a dorm in need of a complete renovation. Before W&M purchased One Tribe Place, in fact, our desire was to renovate Landrum shortly after completing the renovation of Chandler Hall. With OTP now in the mix, we needed to pause and examine the renovation needs there as well, bringing into focus all those critical factors I mentioned. That’s what has guided our conversations to date.”

Jones said the BOV has already approved umbrella projects for dormitory renovations, so if they decide to pursue Landrum renovations first, the planning process will take a year.

Following that process, Landrum would be unavailable as a housing option for a year. Renovations would include adding air-conditioning. No additional rooms would be added.

Correction: An earlier version of this article referred to the uninhabitable wing as the “1986 wing.” The wing was actually built in 1984 and the article has been changed to reflect the correct date.