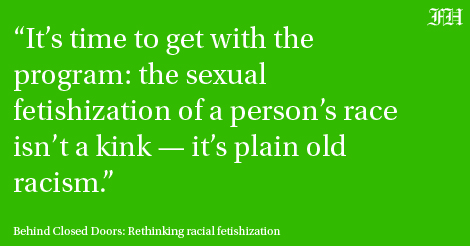 A couple of weeks ago, I was catcalled while walking down Jamestown Road, headphones in, probably thinking about what I was going to eat when I got home to my apartment in Ludwell. I’ve been catcalled before, so I did what I have done every other time some idiot decides to yell “Well how are you doing?” from a moving vehicle. I ignored him. I wasn’t surprised when the result of my silence was yells. But instead of the typical “C’mon baby, don’t you know to speak when you’re spoken to,” what I heard was “F— you n—.”

It sucked and it stung but more importantly it got me thinking about the racism that surrounds me. A friend of mine just posted a Facebook status a few days earlier reminding our peers that saying the “N-word” is not cool when you’re not black. She had heard it uttered around campus, sung drunkenly at parties where Kanye West’s music played on loud speakers, and was understandably upset about what she was experiencing.

But it’s time to get with the program: the sexual fetishization of a person’s race isn’t a kink — it’s plain old racism.

At this point you’re probably wondering how this whole anecdote relates in any way to sex or relationships or your everyday life. But here’s the thing — racism can be overt, but it can also be subtle, sexualized and sneak its way into your existence, even if you’re not a fan of yelling racial slurs at women of color on their walk home from class. All of us need to check ourselves now and again, so consider this a check-in of the racial fetish variety.

Today, we live in a world where one’s racially driven sexual preferences seem to be advertised with very little thought. How many times do we swipe past people on Tinder whose profiles profess “Black guys only” or “Soft spot for black girls?” And if you’re a person of color I bet you live your life hearing iterations of “Is it true what they say about black guys?” or “I totally have yellow and/or jungle fever.” You might be reading this and not understanding that these statements are problematic, and I’ll be honest: I didn’t always get it either. But it’s time to get with the program: the sexual fetishization of a person’s race isn’t a kink — it’s plain old racism.

Black women have been seen as sexual objects for the consumption of white men long before I walked down Jamestown Road that day — just ask one of our favorite alums, Thomas Jefferson. Black men were and still are characterized as so grossly sexual that they’ll rape your wives and daughters if they are left unattended. I’m no history major, but even I can see how America’s racist past has left society sexually stereotyping African Americans. It’s perpetuated by so-called feminists, like Lena Dunham, who continue to push the idea that black men, like Odell Beckham Jr, only see women as potential bedmates.

Racism is not cool and no further explanation should be needed. But racism persists in our society in such a way that sometimes you need to sit yourself down and question whether or not the words you speak and the assumptions you make are fueled by prejudice. It’s not ok to reduce the value of people of color to the color of their skin. And while this article may have focused on African Americans, it goes farther than that. Just think about the rhetoric Donald Trump has used when he talks about international affairs. Or the way in which Asian men and women are reduced to asexual, submissive beings.

And to the man who thought I existed for the sole purpose of being a body for him to jeer at: I might be a black woman, but I do not exist for the consumption of any man, especially those with such fragile, white-supremacist masculinities.

Mallory Walker is a Behind Closed Doors columnist who is not impressed by scrubs hanging out the passenger side of their best friend’s ride trying to holler at her.