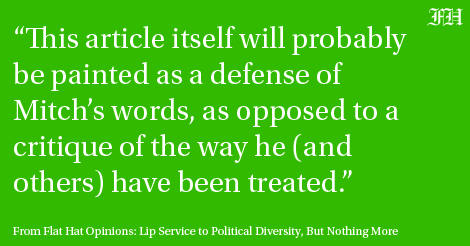 Over the past two years at the College of William and Mary, I’ve found that we only give lip service to tolerance. What we really mean by “tolerance” is tolerance for liberal ideas. Conservatives and libertarians are hardly tolerated on our campus — we’re parodied, made fun of and treated with immense disrespect. As long as liberals occupy the bully pulpit, anything goes.

Mitch Hall ‘17 published an article last week in The Federalist that garnered widespread criticism and hate. He deserved the criticism: He severely misunderstood trans issues and sought to represent a community that he seemed to know nothing about.

Does this make him a “disgusting individual”, or “human garbage”, as some suggested on social media? No. Mitch’s abysmal article deserved criticism, but mob-style character assassinations are counterproductive.

This sort of political intolerance and culture of outrage, though, is nothing new.

Some conservative ideas deserve criticism –– notably, Mitch’s article, as well as Thomas Briggs ‘18’s article on rape culture. These incidents, as bad as they might have been, do not give social justice liberals license to make other students fear speaking their minds. It’s never been easy to be a conservative on campus, but now is a particularly bad time. We’re associated with the circus act of Milo Yiannopoulos and the alt-right movement, so we’re rarely treated with any semblance of respect.

This lack of political diversity is dangerous because college is the ideal place to augment, grow and challenge existing political beliefs. You will not hold the same priorities forever — in fact, if you’re in your early twenties and think you have every political issue right, you lack a great deal of humility. Politics are rarely as black and white as we think.

In my time here, I’ve noticed dozens of attempts to ridicule, silence or otherwise condemn conservative ideas. I’ve had countless professors who have represented abortion as a universal human right. When I attended an art exhibit on micro-aggressions last year, I approached it with an open mind, but a supervising professor tried to convince me that “tone deaf” is a microaggression towards deaf people. I’ve begun to wonder: Are we creating tangible change or are we policing semantics? Offending is not the worst thing you could do to another person, and is a natural and inevitable part of human interaction. For some reason, we’re horribly afraid of it to the point of censorship.

Nuance is lost in our modern discourse, and conservative voices are silenced. This article itself will probably be painted as a defense of Mitch’s words, as opposed to a critique of the way he (and others) have been treated.

It doesn’t end there. Facebook commenters have said ridiculous things, ranging from “Stop White Boys 2015” (in an attempt to silence white, male commenters voicing opinions on social justice topics) to one who called me responsible for “thousands of rapes,” for voicing that rape is difficult to adjudicate considering our current standards for evidence, and that the college revoking honorary degrees before legal guilt has been decided could set a dangerous precedent. This most recent batch of commenters has been pretty heinous, as well, using phrases like “self-hating closet case” and “drag him by the scalp,” to express their anger at Mitch’s writing and character. Anger is justified in this case, but these brutal responses force me to wonder: Is this really an intellectual community where free discourse can thrive?

Nuance is lost in our modern discourse, and conservative voices are silenced. This article itself will probably be painted as a defense of Mitch’s words, as opposed to a critique of the way he (and others) have been treated. Social justice liberals preach a gospel of tolerance and care, but that grace is not extended to many of us –– myself often included.

There were the students who went to a Monsanto representative’s lecture, talked over him the whole time, and then failed to answer his question about why GMOs are bad. There were the people who didn’t want Condoleezza Rice to speak at commencement, calling her a war criminal. Silencing or reducing dissenters isn’t admirable –– it’s cowardly.

Taken piecemeal, these incidents are not horrible. As a racial justice advocate, I fully understand how elements of conservative ideology hinder greater acknowledgement of privilege (an important issue). But taken as parts of a whole, we need to examine our commitment to political diversity and think about whether we’re lumping conservative students together with stereotypical Trumpian alt-righters, or actually understanding the complexity of their viewpoints.

It’s not that conservative voices deserve any special protection. Marginalization of any voice should be fundamentally against the tenets of social justice and equality. Furthermore, it is foolish to assume that no conservative could have anything valuable to add to any conversation.

It is arrogant to assume that half the population is delusional or bigoted, instead of simply reaching different, well-intentioned conclusions. Anger, in times of despair and bigotry, is justified, but reducing and silencing others is indecent.

Liz Wolfe is a Young Voices Advocate and senior at The College of William and Mary. Send her your thoughts at elwolfe01@email.wm.edu.