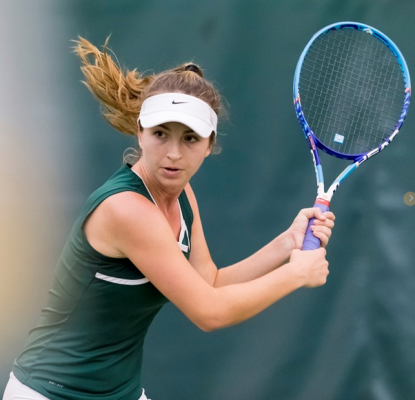 Cheng went on to secure her first career dual-match win at No. 4 against Elon Sunday. Thaler took the No. 5 spot and her sixth win this year after defeating Elon opponent 6-2 and 6-0, improving to 2-0 in dual-match play for the season. Junior Maria Groener crushed her Elon rival 6-0 shutouts in both sets in the No. 6 spot.

Although the men lost to Yale 5-2, senior Damon Niquet and junior Alec Miller secured singles wins. The Tribe men started out Saturday’s match against Brown down 2-1, but three-set wins by junior Christian Cargill, senior Aidan Talcott and Niquet advanced the Tribe to a 4-3 victory against the Bears.

The Tribe dominated the Bears in doubles with wins in the No. 1 and No. 3 spots. Junior Ryan Newman and Talcott beat the Brown No. 1 opponents 6-4, while Cargill and junior Lars de Boer secured a win in the No. 3 spot 6-3.

The men continued their win streak to 2-1 with the defeat of Boston College.

The men continued their win streak to 2-1 with the defeat of Boston College. Senior Addison Appleby’s first dual-match win of the year at the No. 3 spot gained the Tribe a 2-0 lead. An exciting match set was won by sophomore Michael Ruamthong, his first career dual-match win, after a 7-6 tiebreaker.

The women continue their season in Durham against Duke Jan. 28 while the men take on Navy at home Jan. 29 at 11 a.m.