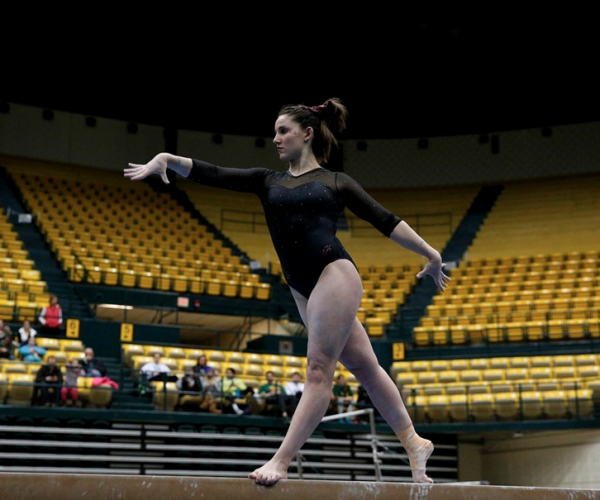 The William and Mary women competed twice over the weekend, with a five-team meet at George Washington Feb. 17 and a quad meet at Maryland Feb. 19.

Sophomore Aaliyah Kerr posted a career-best 9.900, and senior Briana Gironda scored 9.775 to help push the Tribe to a season high of 48.750 on floor.

The Tribe had a good day on bars, with Gironda matching a season high of 9.800 points and Marr and freshman Taylor White equating career bests with matching 9.725 point scores. These scores led the College to a total of 48.400 points on bars.

Gironda and O’Connor again competed in the all-around. Gironda scored a season-high 38.875 and tied for second place. O’Connor scored 38.800 points and tied for fifth.

Gironda led the College to a score of 48.500 points on bars, where she tied for fifth and equated a season high of 9.800 points. O’Connor also scored a season high on bars with 9.775. Webber posted a career high with 9.750 points.

Webber and O’Connor also competed on vault, where they both scored 9.675 points, leading the Tribe to 47.975 points.

Marr led the Tribe on beam, scoring a career best with 9.825 points and placing fifth. Gironda scored a season-high 9.775 points, helping the College to 47.900 points.

Gironda also competed on floor, where the Tribe scored 48.450 points. She and Kerr posted matching 9.775 scores.

The Tribe will continue its season with a dual meet at North Carolina Feb. 24 at 7 p.m.