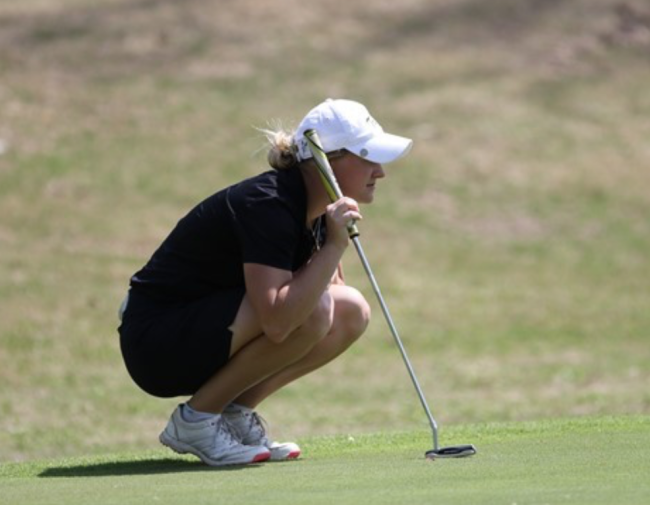 This weekend, the William and Mary women competed in the Colonial Athletic Association Women’s Golf Championship. The College finished in sixth place with an overall score of 931 (+67). The three day, 54-hole tournament took place at Ford’s Colony Country Club in Williamsburg, Va. Having the CAAs so close to home was both a positive and a negative for the team.

“It was actually kind of nice, convenient because my parents and my friends got to come, so that was really sweet,” junior Katie Edelblut said. “But also a little bit more difficult to get in the tournament mindset, not what you want especially for Conference, so mixed feelings.”

The Tribe came into this weekend with the momentum of consecutive second place finishes in its past two events. Competing in the conference championships, however, brings a new dynamic to the game.

“We try not to think of it as too different, but it definitely is different,” sophomore Liz Choi said. “I would say it’s more so the pressure that comes along with it. But it’s golf so you’ve got to play your own game.”

I would say it’s more so the pressure that comes along with it. But it’s golf so you’ve got to play your own game.”

After a testing first day of play, the College sat in seventh place out of the eight teams in the conference. With a 34-over 322, the Tribe finished 26 strokes behind the College of Charleston’s leading score of 296 (+8). During round one, Choi was the only member of the Tribe to finish in the top 20, tying for 19th with a score of 6-over 78. Senior Mia Zanghetti was two strokes behind, tying for 24th with an 8-over 80 finish. Freshman Allison Olberding and sophomore Riley Corona both shot 10-over 82s to tie for 29th, while Edelblut followed by one stroke to tie for 33rd at 11-over 83.

“It’s hard but you just got to just keep grinding. I mean even after a bad first round there’s still a lot of golf left to play,” Zanghetti said. “It’s cliche, but anything can really happen out there.”

It’s hard but you just got to just keep grinding. I mean even after a bad first round there’s still a lot of golf left to play.”

Zanghetti ended her fourth and final CAA Championship with the Tribe’s best individual score, tying for 15th overall at 231 (+15). Head coach Ed Teer commented on Zanghetti’s career with the Tribe.

“Mia has played great for this team for four years,” Teer said. “She worked really hard this year at getting better, she asked for extra help, she really did good things this semester.”

“I have three more years, so we’re going to get our revenge sometime,” said Olberding. “I’m taking away that I, at least for me personally, am very close to where I can be at an elite level. Just working on a couple things, mental game, other than that I’m very happy with how I performed.”

Corona finished with a total of 243 (+27) to come in 31st. This was the first CAA Championship for Corona as well.

“This was my first CAA, so it was a cool experience just to see how the whole tournament worked,” she said. “Obviously there’s a little bit more pressure, you put a little more pressure on yourself and count it as being a bigger tournament, but you also try and keep in mind that it’s also just another 18 holes, and you play 18 holes all the time.”

After a very strong spring season, Teer said he is optimistic for the College’s potential for the future.

“I think we can be highly competitive in the CAA,” said Teer. “We just have to prepare a little better for the bigger events.”