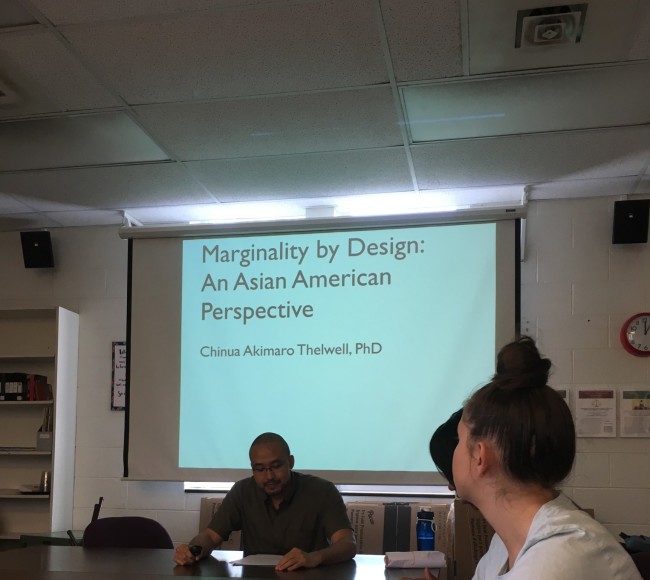 The focus of the lecture was how Asians, among other minority groups, have been routinely and specifically pushed aside in an effort to create a white-only American narrative.

“Asian marginality is something that happens quite often, but furthermore, Asian-American marginality is often by design,” Thelwell said. “It’s often intentional, and it’s often one of the byproducts of a kind of nation-building project that was largely about creating a white national identity.”

He began his presentation with four historical examples of the intentional exclusion of Asians, one of which was a photograph taken at Promontory Point, Utah in 1869 at the completion of the transcontinental railroad, where the two companies that started on opposite sides of the country finally met. One of the companies was the Central Pacific Railroad Company, of which 80 percent of the workers were Chinese.

However, not a single Chinese worker was allowed into the historical picture depicting the railroad’s completion.

“In order for a white national identity to be created, oftentimes racial others have to be left out of the story … because the simple presence of racial others disturbs the neat and tidy narratives of racial nationalism, racial purity and cultural purity,” Thelwell said.

Thelwell explained that he drew heavily from critical race theory when forming his perspective on the issue of racial marginalization.

As an example of this, he cited the 1790 Naturalization Act, which prohibited anyone who was not white from becoming a naturalized U.S. citizen. Almost a century later, a series of laws were passed with the intention of restricting Chinese immigration to the United States, including the Chinese Exclusion Act of 1882, which used ethnicity as a means of preventing Chinese workers from immigrating. Around the same time, California passed an anti-miscegenation act prohibiting the marriage of white people with “Negroes, Mulattos, or Mongolians.” Thelwell explained that during this period of time, “Mongolian” was used to refer to Asians.

However, times are changing. While in 1965, Asians made up half of 1 percent of the U.S. population, largely as a result of efforts to exclude them from the country, as of 2016, Asian-Americans are the fastest-growing racial group, making up 6 percent of the population.

“Every day our country grows by about 8,000 people, almost 90 percent of whom are people of color … and so a more racially diverse America is coming whether we want it to or not,” Thelwell said.

Thelwell cited research that said that marginalization of minority groups played a role in the recent presidential election.

“There was a recent study that was published in The Nation and it used regression analysis to interpret the voting patterns in the 2016 election,” Thelwell said. “Scholars found that fear of diversity made people more likely to vote for Trump.”

Thelwell argued that the Asian-American response needs to be one of action that directly opposes the concept of Asians as the “model minority” who are silent, passive and stay out of politics.

Public health major Wei Chang ’17 said that she was intrigued by the title of the lecture when she saw it on Student Happenings, in part because of her personal connection to the topic.

I lived in Taiwan until I was 12, and then I moved to Virginia … so I’m always kind of thinking about where I fit into this American-Asian identity and so this topic, talking about marginality by design, was just really interesting to me,” Chang said.

“I lived in Taiwan until I was 12, and then I moved to Virginia … so I’m always kind of thinking about where I fit into this American-Asian identity and so this topic, talking about marginality by design, was just really interesting to me,” Chang said.

Chang said that the lecture inspired her to both think differently and to take action.

“I want to really continue learning more about Asian-American history … Silence is a way of marginalizing … I think my first step is learning a lot more about this history and where this is going, and then speaking out,” Chang said.

Sociology professor and incoming director of Asian and Pacific Islander-American Studies Deenesh Sohoni was part of a core group of faculty that decided to have a series of speakers relating to this topic.

Relating to this topic, he spoke about what he and the other faculty wanted students to take away from the lecture.

“There’s this kind of marginalization that ignores that large historical role of Asians,” Sohoni said. “In fact, if you look at immigration law and naturalization laws, a lot of it was designed and reflective of efforts to keep out Asian-Americans … A large part of this series is to get people to realize the significant role that Asian-Americans have played in American history.”