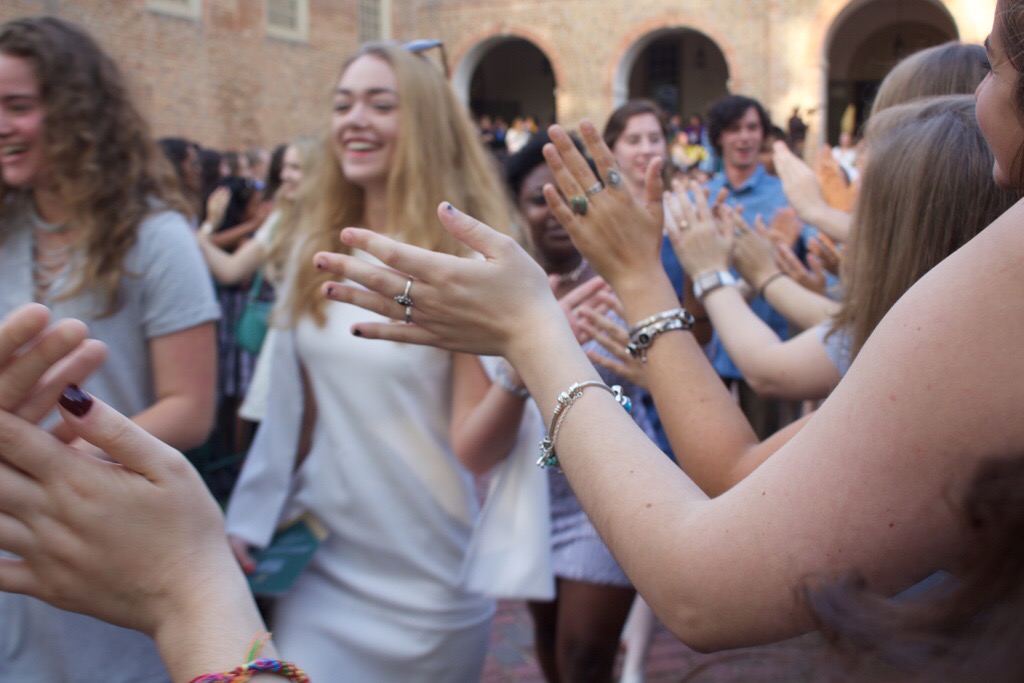 When new students walked through the Christopher Wren building for Opening Convocation Wednesday, Aug. 30, it marked the first event in the College of William and Mary’s commemoration of the 50th anniversary of African-American students in residence.

In the autumn of 1967, three women expanded opportunities for all who would follow them, and we will be recognizing them over the course of this year,” College Provost Michael Halleran said.

“In the autumn of 1967, three women expanded opportunities for all who would follow them, and we will be recognizing them over the course of this year,” College Provost Michael Halleran said.

With this anniversary in mind, John Thomas, a former member of the College’s Board of Visitors and the first African-American appointee to the Virginia Supreme Court, was selected to address the class of 2021 and other new students.

“We have great hopes on this first day of the academic year for what you will become, but it’s not just for you,” Thomas said. “It’s because what we’re trying to do is ignite within you the burning desire to learn and to keep learning, to push for fairness and justice and equity and then to share the light that is within you.”

Additionally, the three first African-American residential students, Lynn Briley ’71, Janet Brown Strafer ’71 and Karen Ely ’71, were recognized at the ceremony and later invited to lead the procession of new students through the Wren Building and into the Sunken Garden.

To further commemorate the College’s celebration of this anniversary, Virginia State Senator Monty Mason ’89 (D-1) presented a resolution acknowledging the anniversary that had passed in the Senate that was also supported by the Virginia House of Delegates.

In his speech, Thomas addressed the history of African-American students at the College, and acknowledged that history was still occurring as the 325th year of classes began.

“It was just 50 years ago that people of color were allowed to come here as students … but it occurred because of the perseverance and determination and strong shoulders and the grit of these people, these women right here that you can see and touch. So I want to tell you that history is not just from a long time ago,” Thomas said. “History is happening right now.”

Thomas also said that he thought it was important to consider that slaves were traded and sold near the borders of the College property.

He also said that it was important to differentiate between liberal arts and the “skills of freedom” which he said he believes is a more accurate term for the College’s curriculum.

Reveley also addressed the crowd gathered in the Wren Yard during the Convocation ceremony. He said that he was moved by the support he saw at the national level for those who were affected by Hurricane Harvey and the support he saw for students whose families and friends had been affected.

According to Reveley, this outpouring of support was more indicative of the United States and American citizenship than the events that transpired in Charlottesville Aug. 11-12 when white nationalists gathered for protests.

Reveley also said that free speech was important at institutions like the College, and that students should engage their differences with civility and compassion.

“Of course our conversations and debates will become intense at times because we really care, but at William and Mary they become intense coupled with abiding concern for one another as fellow humans, each one of us worthy of respect and basic courtesy from our friends, our colleagues,” Reveley said. “And I think very, very rarely, if ever, should any of us assume that the precise shape and the precise substance of our own views define exactly what any reasonable and good person must think. Because in all reality, none of us is either intellectually or morally omniscient.”

Two members of the campus community were also presented with annual awards at the ceremony. The 2017 President’s Awards for Service to the Community were presented to Associate Director of Athletic Development Al Albert ’69, M.Ed. ’71 and Isabella Bartels ’18. Albert was recognized for helping develop the Community Partnership Soccer Program of the Virginia Legacy Soccer Club and Bartels was recognized for her work with Lafayette Kids.