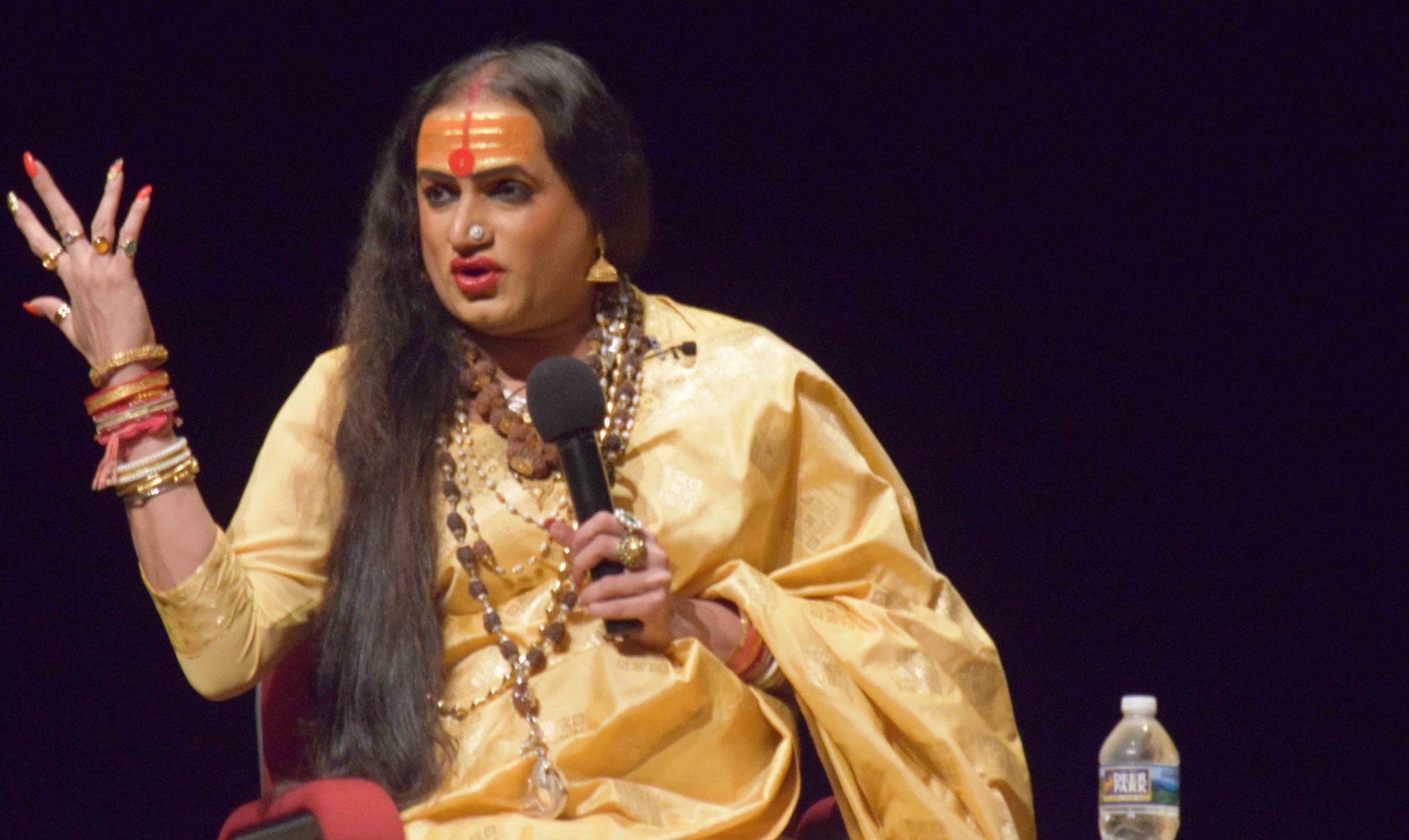 Wednesday evening, hundreds of students poured into Phi Beta Kappa Memorial Hall to watch a performance by Laxmi Narayan Tripathi and listen to her discuss her life as a hijra and a trans-activist.

Tripathi was one of the plaintiffs in a 2014 Indian Supreme Court case that established legal recognition of a “third gender.” Tripathi is also the author of the book “Me Laxmi, Me Hijra,” which was one of the first texts in South Asia to be written from the perspective of a transgender person.

Tripathi’s performance and the following conversation was part of a broader component of the campus COLL 300 curriculum. This semester, 426 students are enrolled in 30 available COLL 300 classes. Each semester, the Center for Liberal Arts will host three visitors that relate to the COLL 300 theme. This year’s theme is “IN / EXclusion.” Courses and speakers will look at the processes of inclusion and exclusions within communities.

This is the first semester the COLL 300 curriculum is being taught at the College , as the first social class of students to be on the COLL curriculum rather than the GER system are now juniors.

“This is the first full pilot semester of this vision we had for COLL 300,” Chancellor Professor and Fellow with the Center for the Liberal Arts Eugene Tracy said.

The evening was broken up into three different sections. First the audience was treated to a dance piece performed by Laxmi and some students from a Modern III class. After the performance, Tripathi was interviewed about her life experiences and on other topics relating to gender and sexuality. Then the audience was given an opportunity to write down questions they had for Tripathi, which she answered on stage.

The event began with a few opening remarks from Tracy, who explained the COLL 300 curriculum to the audience and jokingly compared himself to Indiana Jones.

“My job up here is like Harrison Ford in ‘Raiders of the Lost Ark,’ which is basically to get the ball rolling and then get out of the way,” Tracy said.

After Tracy’s opening remarks, Tripathi and students from Professor Morris’ modern dance class performed a dance for the audience. Tripathi had only one hour to choreograph the performance and two hours to rehearse with the dancers.

After the dance, Tracy brought Assistant Professor of World Theater, Claire Pamment, on stage to interview Tripathi. Pamment proposed that the Center for Liberal Arts invite Tripathi as a guest and helped arrange her visit to campus. Pamment met Tripathi in 2015 and was grateful to have an opportunity to reconnect with her. 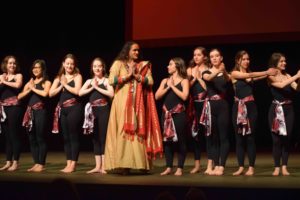 “I’m very thankful to CLA and all the many sponsoring departments … to have this opportunity for me to meet Laxmi again and to share her with all of you,” Pamment said.

Pamment and Tripathi opened the interview with a discussion of what it means to be a hijra. Tripathi recalled a time in 2006 when she had to introduce herself to several important political figureheads at an International AIDS conference.

Tripathi said that many people she has met do not understand what she means by “neither man nor woman.”

“We enjoy the world, the nature,” Tripathi said. “The nature’s femininity is that which we enjoy, so that’s why our title is feminine, and we pull the femininity out of our souls to live feminine in this world, but we don’t relate ourselves to be women. We are third gender.”

According to Tripathi, hijra translates to mean a person who leaves their own tribe in search of their own self. However, hijras don’t normally leave their homes willingly. Often, they are forced out because their families make them feel unwelcome. Tripathi said she was blessed to have parents who loved and accepted her. They did not wish to see her leave home.

“I do not care about society,” Tripathi said. “They aren’t buying me clothes.”

While Tripathi expressed gratitude for the love and support she received from the people in her life, she said it saddened her to think that other hijras might not receive that same support.

“What would be the biggest sorrow?” Tripathi said. “The sorrow of being unloved, and that is the sorrow my community faces.”

Pamment and Tripathi also discussed Tripathi’s activism and her opinions and on topics of gender and sexuality. Toward the end of the interview, Pamment asked Tripathi about her opinions on sex work. They discussed whether or not sex work should be legal in India. Tripathi said that she believes legalizing sex work would create lots of problems but that it should at least be decriminalized.

Although Tripathi has largely become known for her activism, one of her main passions is dance. She is a classically trained Bharatanatyam dancer and has danced in numerous venues around the world, including dancing in front of the UN. According to Tripathi, dance helped her deal with many of the problems she faced.

“Dancing always gave me a sigh of relief,” Tripathi said.

“What would be the biggest sorrow?” Tripathi said. “The sorrow of being unloved, and that is the sorrow my community faces.”

During the audience-question portion of the event, an audience member asked Tripathi if being a hijra made her dance career more difficult. She insisted that being a hijra was not a problem and added that the biggest challenge was convincing her teacher to come out of retirement. Throughout the evening, Tripathi made it clear that she did not let the stigma of being a hijra dictate the way she lived her life. An audience member asked if she worried that society would judge her for the way she dressed, and she replied that she did not care.

“I do not care about society,” Tripathi said. “They aren’t buying me clothes.”

Recently, Tripathi was awarded the highest level of Hindu spiritual guardianship. Some people worried that her new religious role would keep her from fighting for LGBTQ rights. Tripathi said she assured them that she would not judge members of the LGBTQ community who came to her looking for spiritual guidance.

“I am not one to judge,” Tripathi said. “It is between the child and his god.”

Pamment and Tripathi discussed several controversial and emotional topics throughout the evening. At the end of the event, Tripathi reminded everyone to treat people with kindness.

“[Whoever] you meet, treat them with dignity, love and respect,” Tripathi said.