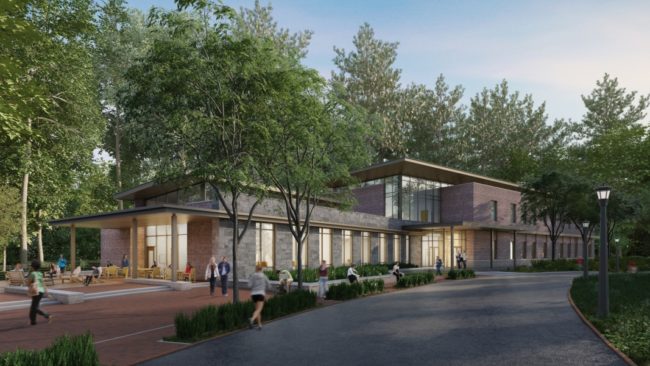 Over the next three academic years, the College of William and Mary will break ground on new construction projects and review architectural designs for projects to transform campus. Demolition, renovations and the design process for buildings will manifest across campus from the Student Recreation Center to the Integrated Wellness Center.

Renovations to the Alumni House, announced last year, are estimated to be $20 million and sourced from private donors. According to Senior Vice President for Finance and Administration Sam Jones, the current space was not meeting the needs of alumni, so the renovations would create support spaces for them and add a larger gathering space.

Following the proposed designs, the renovations would add 400 seats around round tables or 900 seats in a theater-style space. This design is intended to complement the Bright House, which is one of the current parts of the Alumni House.

The design also includes a space for a gathering garden and adds beauty to the existing structure.
Director of Facilities Maintenance, Planning and Design Jeff Brancheau, said the contract for the construction will be awarded in the summer of 2018. Brancheau hopes the renovations will be completed by the summer of 2019.

The ongoing construction on the Grim Dell is part of a three-phase project. This project, according to Brancheau, is designed to improve sediment and storm water drainage issues on campus, which have negative ecological impacts. The first phase of this project was just completed, and the second phase, which will come with the creation of retention pools, will begin in the coming weeks.

Future construction will include best management practice sites, which are acceptable structures that are implemented to protect water quality and promote soil conservation. The last steps will include paving a gravel path behind Washington Hall and Ewell Hall.

Brancheau said this construction should end no later than August 2018. $3.3 million was allocated to this project.

Construction on the Integrated Wellness Center began in April 2017, and the planned completion date is for some time before the 2018 academic year. The goal is to create a holistic health center, which will move the Student Health Center and the Counseling Center into the same building, and will expand wellness options for students.
Currently, foundational concrete is being poured, and according to Brancheau, it should begin to resemble a building in the next two to three months. After adjustments were made to the budget, it increased from $17 million to $19 million.

With a budget of $19 million, the College is completely renovating Landrum Hall, which is located in the row of residence halls including Chandler Hall and Barrett Hall. Landrum last had residents in the 2016-2017 academic year, and was taken offline during the summer of 2017.

The renovation process includes completely gutting the building, replacing the windows and roof and re-doing the gutters to prevent leaks in the top floors. During the renovation, the building will also be connected to central air conditioning. Other additions to the residence hall include glassed-in conference rooms for studying, and adding an additional two beds through an updated floor plan.

According to Brancheau, this project is set to be completed by the fall 2018 semester, although he is currently unsure if it will be ready for new residents as was initially planned.

After demolition on the 1984 wing of the residence hall began last spring, the College initially set a goal to complete demolition by 2017 Commencement. However, the demolition project is ongoing, and Brancheau said he hopes it is completed by the end of the academic year.

The 1984 wing of the building was not up to the College’s building code when the College purchased the property formerly known as the Hospitality House. Water penetration damaged the 1984 wing and the hotel’s restaurant and ballroom, which have not been in use since the time of purchase.

The planned demolition initially had a budget of $4.447 million, but has since decreased to $2.5 million. While the College had initially planned to rebuild the back wing to create more student residence halls, that project was estimated at $10 million, which has since halted the second phase of OTP renovations.

“We are sort of ‘moth-balling’ the interior right now, to keep it in a preserved status,” Brancheau said. “That way, if leadership goes in and decides that they want to do it [the renovation] we will have that ready to go.”

Following the Americans with Disability Act, the College began a two-part compliance project last spring. The first part involved relocating the first-floor bathroom of Adair Hall and adding an elevator. This project was estimated to be completed by December of 2017, but the completion date has been pushed back to August of 2018.

According to Brancheau, construction on the Sunken Garden in September of 2017 was done to fix the existing bricks and to put down a netted straw mat to induce grass growth. However, the netting was not as successful as the College hoped, so Brancheau said the net will remain there for now.

$2.889 million was allocated for these projects, but Brancheau said it is not clear if this is the current budget or when construction on the curb-cut sidewalks will begin.

The first two phases of the Fine and Performing Arts Complex received funding from the Virginia General Assembly for $118 million.

According to Brancheau, there is a schematic design for the first two phases, which means there is a basic design for the project. Now, the College is working on completing a true preliminary design by March 2018, and hope to award the construction project by August 2018.

These phases will create a new building in between Lemon and Hardy Halls, which is set to be 75,000 square feet. The first two phases also involve renovating the existing PBK structure, which will add 110 square feet.

The third phase, which involves connecting the Muscarelle Museum of Art to the existing Phi Beta Kappa Memorial Hall structure, has not yet received funding from the General Assembly.

The College is working on awarding the contract for the design for the Muscarelle renovation, which aims to renovate the existing building and create a new addition that will extend towards Morton Hall to increase exhibit space.

While the College previously announced that all funds would come from private donors, Brancheau said the budget for the project is not yet set, since the designs have not been completed.

Construction on the Student Recreation Center is set to be completed next week, after final touches are made to the pool renovations. With a budget of $1.5 million, construction began in January 2017, and involved redoing the locker rooms, and upgrading the pool facilities.

The locker room renovations have already been completed and are open again for public use. While the pool has been completed and filled with water, Brancheau said final touches are needed for the ventilation and pool filtration systems.