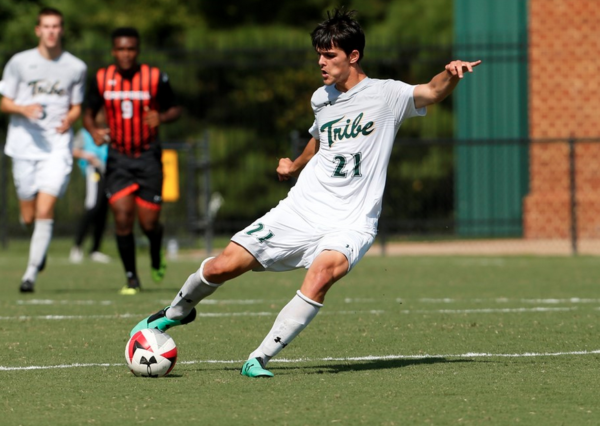 William and Mary had two matches this week as it looked to continue its momentum from a victory over Campbell the previous weekend. Wednesday night, the College traveled to Longwood and escaped with a 1-0 overtime win. Saturday, the Tribe returned home for a Colonial Athletic Association match against the University of North Carolina-Wilmington. The Tribe held the lead for much of the match, but gave up two late goals to fall 2-1.

Wednesday, the College (4-3-2, 0-1-1 CAA) squared off against the Lancers for an in-state match on the road. The match got off to a slow start, but the Tribe began to dominate play and generate chances.

After a few shots in the previous 10 minutes, junior forward Ryder Bell nearly put the College on the board first. He was able to get off a shot that beat Longwood’s goalkeeper Lance Da Silva, but the ball ricocheted off the post and bounced away from the goal.

The College put more pressure on Da Silva as the half progressed, forcing him to make a couple saves towards the end of the first half. In the 35th minute, junior forward Christian Jones fired a shot on target that was saved by Da Silva, and in the 44th minute, sophomore midfielder Julian Ngoh put a shot on frame that was deflected by Da Silva and went over the line for a corner kick. However, the Tribe was unable to create another chance off the kick.

The game went to halftime tied 0-0, despite the Tribe dominating in shots and possession.

The second half continued with the College controlling play and creating a multitude of chances. The Tribe almost found the back of the net off a set piece when junior midfielder Antonio Bustamante bent the ball into the box and onto the head of freshman defender Sam Golan. Golan was able to direct the ball towards the net, but once again Da Silva was able to keep the College off of the scoreboard.

As the match entered the final 20 minutes, neither team had been able to find a breakthrough. In the 75th minute, sophomore defender Hristo Bustamante received a yellow card. Minutes later, the Lancers nearly scored when sophomore Connor Rea put a shot on goal, testing Tribe senior goalkeeper Phil Breno. Breno was able to make the stop and keep the score deadlocked.

In the waning minutes of the half, the Tribe had one last chance to avoid going to overtime. Antonio Bustamante created some space and got off a shot, but it was wide of the goal and did not force Da Silva to make a save.

The match headed to overtime scoreless. The Tribe was in danger of having a small lapse and giving up a goal, nearly losing a match it had dominated. The Lancers had the first chance of the overtime period when they forced a corner kick. Midfielder Holden Fisher took the corner for the Lancers, but was unable to get off a shot.

In the 98th minute, senior forward William Eskay got the ball to Antonio Bustamante. He was finally able to find the breakthrough for the Tribe, ripping the shot past Da Silva and into the back of the net for the game-winner. The College escaped with a 1-0 victory, giving them two consecutive wins.

Saturday, the College played its conference home opener against the Seahawks (6-1, 2-0 CAA). The Tribe was looking to pick up its first conference victory of the season after managing only a draw in a match at Drexel.

“We were facing a lot of pressure, but we were very organized,” Golan said.

The College eventually settled into the match and got some chances of its own. In the 20th minute, Ngoh fired a shot from a very close range, but it was hit directly at Seahawks goalkeeper Ryan Cretens.

In the 25th minute, Bell had a great opportunity from the top of the box, but his shot zipped just past the left post and went out for a goal kick. The Tribe earned a corner kick in the 28th minute. It was originally cleared by the Seahawks, but junior defender Remi Frost fired the ball back into the box. Golan came up with the ball and dribbled to his left, firing a shot past Cretens to give the Tribe a 1-0 advantage. It was the freshman’s first goal of his career.

“It was good to get my first goal and help the team out, so that was a positive on the night,” Golan said.

The Seahawks came back with a few minutes of constant pressure; however, the Tribe defense fought off the Seahawks and maintained its 1-0 lead going into halftime. In the 53rd minute, the College nearly doubled its lead when Antonio Bustamante’s shot hit the post and then bounced harmlessly out for a goal kick.

“We needed to do a better job of stopping some of their possession higher up the field,” head coach Chris Norris said.

The College alleviated some of the Seahawks’ pressure over the next few minutes. Regardless, the Seahawks finally found an equalizer in the 75th minute. Another Seahawks corner kick led to a header off the crossbar, but the ball dropped dangerously in front of the goal and was hammered home by forward Phillip Goodrum. The Seahawks had all of the momentum after their goal and were able to create a couple more corner kicks and chances over the next few minutes.

In the 85th minute, Goodrum scored again off of a corner kick to give the Seahawks their first lead of the night with just five minutes remaining in the match. Right after the goal, Antonio Bustamante ripped a long shot on goal that challenged Cretens, but he was able to make the save. That was the last chance the Tribe created, and the match ended with a 2-1 Seahawks victory after the late comeback.

The Tribe looks to get back on track in conference play Wednesday at rival James Madison before returning home for another conference matchup against Delaware.

“We need to continue to work on the details,” Norris said. “We are never fully satisfied and our attitude is always that we are trying to improve.”