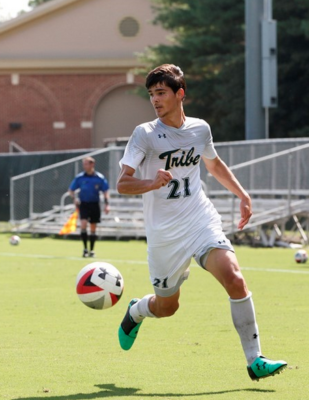 Saturday, William and Mary hit the road and squared off against Colonial Athletic Association opponent Northeastern (2-8-2, 1-3-1 CAA) and claimed a 4-1 victory on its turf.

The Tribe (5-4-3, 1-2-2 CAA) came out strong and scored four goals in the first half over a span of 16 and a half minutes. The four-goal run began in the 18th minute and came from junior forward Ryder Bell off junior forward Antonio Bustamante’s first assist of the night.

Seven minutes later, sophomore midfielder Reeves Trott found the back of the net with a ball centered by Bustamante.

A mere three minutes later, Bustamante added to the scoreboard in favor of the College with a chip from 12 yards out from a lofted ball from redshirt senior Riley Spain.

The College’s scoring streak ended on a set piece in the 34th minute with a header goal by redshirt junior forward Christian Jones. This goal marked Jones’ first career goal. The free kick was taken by none other than Bustamante, marking his third assist of the game.

Northeastern was unable to find the back of the net from the field for the entirety of the game. Their opportunity came late in the 90th minute when the College gave up a penalty kick; the Huskies took advantage of this opportunity as the shut out slipped through the Tribe’s fingers. The kick was taken by Northeastern defender Martin Nygaard, marking his second goal of the season.

Bustamante’s presence demanded attention as he continually contributed to the Tribe’s victory. He was a key factor in all of the goals for the College and is the first player in two years to record three assists in one game.

Not only is this on par with teammate junior midfielder Marcel Berry, the most recent player to achieve this status, but this also set Bustamante’s career-high for assists and the record for any CAA player this season.

Bustamante’s three assist run also came close to the College’s record of four assists in one game that was set Nov. 9, 2000 by Doug Henry ’02 in a match against UNC-Wilmington.

Fellow teammate Trott has recently become a dependable goal scorer for the Tribe. This season, Trott has scored four goals, three of which were from the three most recent matches.

So far, eight members of the team have contributed to the Tribe’s 19 goals this season. 15 of those goals came from a powerhouse tetrad consisting of Bustamante, Bell, Trott and senior forward William Eskay. Three of these four – Bustamante, Bell and Eskay – are currently neck-and-neck in the race to earn the most assists for the season with four apiece.

Moving forward, the College will host conference opponent Elon Oct. 11. This game will mark the first of three games that the Tribe will play on its own turf. The Tribe will then play Hofstra Oct. 14 followed by Virginia Tech Oct. 18 to complete the three-game homestead at Martin Family Stadium.