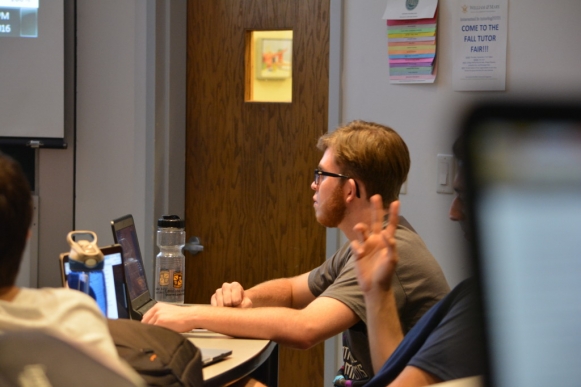 Class of 2019 President Jonah Yesowitz ’19 introduced the bill, which would allocate $3,007 from SA reserves to fund Thanksgiving food for low-income families in the City of Williamsburg. $3,000 would cover the cost of turkeys through Sodexo, and $7 would cover the cost of printing advertisements. If passed, SA would work with Campus Kitchen to coordinate the event.

“This is an act that I have been working on for the last couple of weeks,” Yesowitz said. “I have met with Sodexo on a couple of different occasions to figure out what they’ll be able to do and where we can play a part.”

In November 2015, former Class of 2017 President Katherine Ambrose ’17 sponsored the Tribe Turkey Act, which allocated senate funds up to the amount of $2,000 to match donations raised to purchase food baskets for families in the Williamsburg area. SA also partnered with Sodexo, the Sharpe Community Scholars program and the Office of Community Engagement to establish a Student Assembly Day of Service. At the time, the senate was divided over clauses of the bill that allocated SA funding for the service project, as some senators believed it was not within their abilities to fund community service projects.

Other concerns were raised about funding the bill because some senators were not sure if it was appropriate to allocate funding for an off-campus event, when some on-campus student organizations are denied funding requests for philanthropy events.

When it came time to vote on the bill, Ambrose said that she did not believe it was fair to create a day of service without matching the funds students and community members raised.

“In my personal opinion, I do not think that it is appropriate of us to be asking Sodexo for their contributions and asking the Office of Community Engagement, the Sharpe program and students on campus for their contributions, if we are not also going to put some of our own funding into it,” Ambrose said at the time.

The senators moved to vote on each of the Tribe Turkey Act’s four clauses individually, and while there was not unanimous support, all of the clauses passed, and the Student Assembly Day of Service was established for Nov. 21, 2015.

Now, Yesowitz is working with Campus Kitchen to coordinate the work and said that he has been working with Dining Services. Students will be able to donate guest meal swipes as well as dining dollars leading up to the day of turkey donations. Yesowitz also said that he is working to coordinate providing food for Sodexo employees and to plan advertising for the event.

According to Campus Kitchen Coordinator Thomeka Watkins ’19, SA involvement would help her organization expand beyond its previous outreach.

“Essentially, Campus Kitchen is a food insecurity nonprofit,” Watkins said. “William and Mary holds an annual event called Turkey Palooza, where we deliver turkeys and canned goods to families in Williamsburg. Currently we only deliver to four low-income areas, but we want to expand the event. The grant would allow us to deliver to motels where people are living long-term because of the high cost of living here.”

Chair of Senate Alaina Shreves ’18 assigned the bill to all senate committees for review over this past weekend, and senators will vote on the bill during their next meeting Oct. 10.