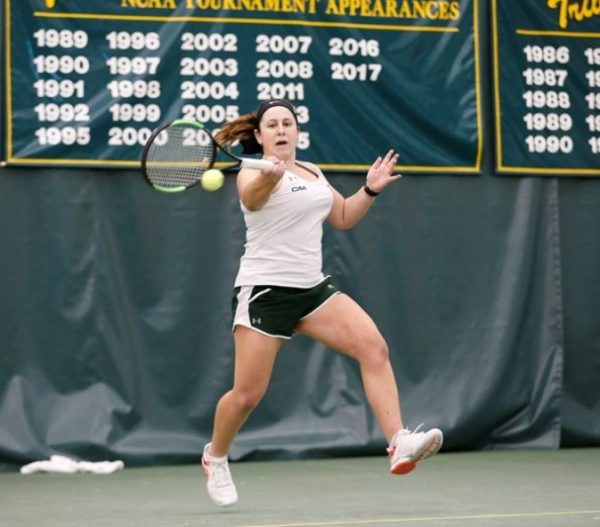 After suffering a painful defeat last weekend, William and Mary hit the road and traveled to Chapel Hill, North Carolina for the ITA Kick-Off Weekend hosted by North Carolina.

The Tribe (2-3) squared off against Big Ten foe Illinois (3-0) in the opening round of the weekend.

Despite singles wins by junior Lauren Goodman and sophomore Natalia Perry, the College still dropped the weekend opener to the Illini. The Tribe was unable to clench the doubles point or single wins at the No. 2, No. 3 and No. 5 spots.

Illinois made a statement and jumped out with a 1-0 lead by securing the doubles point at the top two spots.

Goodman stood strong and evened the playing field with a win for the Tribe at the No. 6 spot. Goodman continued and was then met with two consecutive set losses against Illinois’ Grace Tapak, 6-2, 6-0. These sets preceded her eighth singles win of the year as she evened her dual-match record at 2-2.

Meanwhile, at the No. 3 spot, Perry responded to a set win with a victory of her own. Perry definitively claimed the first set with a 6-0 victory over freshman Emilee Duong. The sophomore then continued to obtain her 11th win of the year after picking up her first dual-match win of the season.

The Illini solidified a victory by winning the final two matches at the No. 2 and No. 5 spots, which ensured that they advanced into the ITA Kick-Off Weekend Regional Final on Saturday.

At the top position in singles, sophomore Rosie Cheng reigned over Illinois freshman Asuka Kawai with a 7-5 victory. However, with the team result already decided and Kawai leading 3-2 in the second set, the match was abandoned as the Tribe moved ahead to the consolation round.

Cheng outplayed a national top-15 opponent, and senior Olivia Thaler pulled a three-set tiebreaker victory to push the College past the Eagles (0-2).

After being unable to claim the doubles point, the College commandeered a team victory with four singles wins from Cheng, Thaler, Goodman and freshman Victoria Okuyama.

The Tribe fell behind as the Eagles closed on the initial point with doubles wins at the No. 1 and No. 3 spots.

Cheng posted the Tribe’s highest-ranked win since 2015 against a nationally-ranked opponent. The sophomore and two-time Big South Player of the Year Lauren Proctor split the first two sets, each winning a set 6-2. Cheng outplayed Proctor in the end, claiming a victory for the Tribe in the third set, marking Cheng’s second straight win.

Goodman, with a three-set win in the No. 4 spot, pushed the Tribe ahead for the remainder of the match. The junior jumped out strong, earning a victory in the opening set by a 6-2 margin, before Winthrop’s Tayla Van Eck answered with a 6-3 victory in the second set. Mirroring the resiliency of Cheng, Goodman outlasted Eck with a narrow 7-5 triumph.

At the No. 5 post, Thaler sealed a victory for the Tribe after dropping the opening set 6-3 to Winthrop’s Aida Kelic. Thaler fought back and secured her 12th singles win of the season. The College senior won both final sets 7-5.

Looking ahead, the Tribe will travel to Dartmouth for two matches Feb. 3-4. The College will square up against Atlantic Coast Conference opponent Boston College Saturday before facing Dartmouth Sunday.