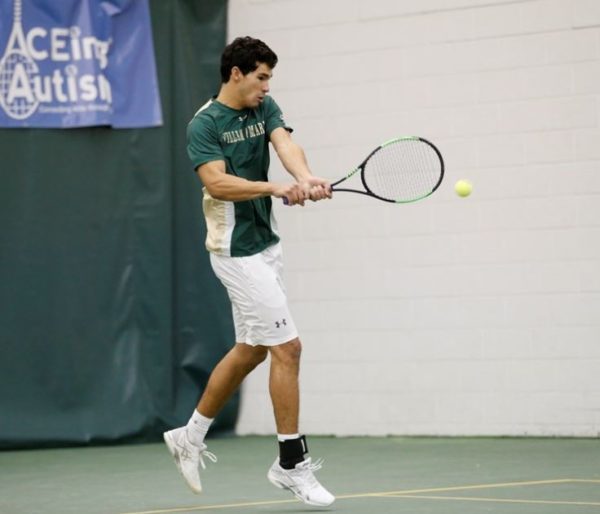 Friday, William and Mary welcomed Elon to the McCormack-Nagelsen Tennis Center. The Tribe (3-0) came out victorious with a 4-3 win over the Phoenix (2-3), thanks to a hard-fought tiebreaker performance by freshman Finbar Talcott. The College’s 3-0 record marks its best start since 2011.

The Tribe had a rocky start as Elon clenched the doubles point with wins at the No. 1 and No. 2 spots. The senior duo of Lars de Boer and Alec Miller won their doubles contest 6-2 at the No. 3 spot before the Phoenix took the final match win at the No. 2 spot.

“I just fought hard and was able to pull it out in the end,” Talcott said.

The Tribe comeback began with freshman Louis Newman’s 6-1, 6-4 victory at the No. 4 spot, tying the match. Senior Christian Cargill fell to Elon’s Felipe Sarrasague 6-4, 6-3 at the No. 1 spot, putting the Phoenix up 2-1. The College secured two consecutive victories by de Boer and Miller at the No. 3 and 2 spots, respectively, putting the Tribe up 3-2. De Boer’s win at the No. 3 spot marked his sixth singles match of the year. Freshman Sebastian Quiros was defeated by Elon’s Felipe Ossess-Konig after a drawn-out 7-5, 6-4 match.

Tied 3-3, the outcome was to be decided by Talcott in his match at the No. 5 spot against Phoenix Camilo Ponce. Talcott came out of the first set on top in a 7-6 victory but fell short 6-3 to Ponce in the second set. Ponce began the decisive third set with an early 3-0 lead, a promising start for the Phoenix. However, Talcott — down 4-1 — came back with five straight set wins, resulting in a 4-3 Tribe victory.

“Obviously very tough match played by both sides,” head coach Jeff Kader said. “Credit to our guys for putting in the work, but kind of got a little bit lucky… but overall we knew it was going to be a tough match and our guys fought hard all the way through.”

Saturday, the College took on Penn (0-2) in a contest that, again, came down to a final tiebreaker set.

Unlike the previous night, the Tribe had a strong start that resulted in winning the doubles point. After the College dropped the contest at the No. 3 spot, the teams of Cargill and Newman and freshman Michael Chen and Miller pulled off consecutive victories to give the College an early 1-0 lead.

The Quakers and the Tribe took turns winning matches until the score was tied 3-3. Talcott fell to Penn’s Max Cancilla 6-3, 6-1 at the No. 5 spot, but then Quiros retaliated with a 6-0, 7-5 victory over Quaker Aleks Huryn at the No. 6 spot. Penn responded with a tight 7-5, 6-3 victory over Cargill at the No. 1 spot. Miller’s contest against Penn’s Josh Pompan at the No. 2 spot went into a third set, with Miller winning the final two sets 6-2, 6-4 after dropping the first set 6-2. At the No. 3 spot, de Boer was defeated by Quaker Dmitry Shatalin in another third-set decision.

The results of the contest came down Newman’s match at the No. 4 spot against Penn’s Nicholai Westergaard. Newman took the first set 6-4 before dropping a close second set 7-6. Despite Newman’s struggles in the second set, he easily claimed the third set 6-1, claiming the Tribe’s second 4-3 victory in two days and its third of the year.

The College looks to improve its record at home when it hosts Richmond at the McCormack-Nagelsen Tennis Center Feb. 1 at 6 p.m.