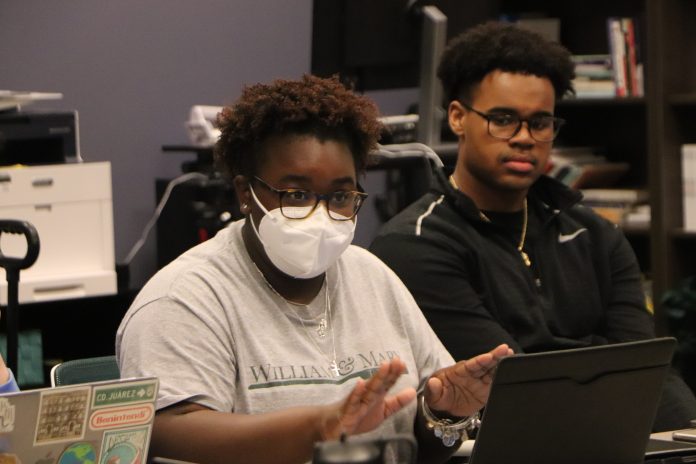 Additionally, earlier that day Sen. Taylor Fox ’24 announced her resignation from SA effective April 17. She was announced as the senior advisor for community engagement and outreach for the incoming Cho-Martinez administration the previous day.

Chair of the Elections Commission Marley Fishburn ’24 gave a short presentation on the recent SA election at the beginning of the meeting, highlighting trends and insights about the election compared to previous ones.

“Voter turnout was 24%, which is a little bit lower than we expected, especially since the student body presidential race was contested, but it was only about two percent less than last year,” Fishburn said. “Turnout has not been as high as pre-2020 levels, but they are increasing.”

Sen. Eugene Lee ’23, Chair of the Finance Committee, reviewed the FY22-23 Budget Breakdown. With an expected revenue of $764,302, the SA budget allocates $109,720 to Student Government, $307,500 to contracted organizations including Media Council, Alma Mater Productions and Steer Clear, $190,297 for administrative fees and operations and $156,785 to be allocated to registered student organizations through the organizational budget allocation process.

In a vote of 10 in favor of overriding the veto, 12 in favor of sustaining it, and one vote of abstention, SA failed to override Boojala’s veto of the New Leaf Subsidy Act which would pay for substance abuse treatment for students who are referred to it by Community Values and Restorative Practices (CVRP).

The twenty five minutes of discussion before the vote centered on the possibility of re-introducing the bill with amendments in the next SA senate session, which begins later in April, and the merits of the points outlined in Boojala’s four-page explanation of her veto.

Sen. Sean Nguyen ’25 introduced the Impeachment Reform Addendum Act, which would prevent those who have been impeached and convicted in a trial by SA from being able to serve in any SA position through a simple majority vote after conviction.

Sen. Cody Armstrong ’22 introduced the Who’s There Act, which would make knocking on tables, chairs, or other hard surfaces manners deemed inappropriate for Senate meetings. Since Chair of the Senate Owen Williams ’23 re-introduced the tradition earlier in the 329th session, senators have knocked on tables during or after speeches to show their support for the speaker’s message.

“I’ve been vocal about my hatred of knocking during Senate meetings, so I thought, why not implement a Code change?” Armstrong said.

In response, Sen. Jahnavi Prabhala ’22 said that she believed that the decision should be up to the discretion of the senate chair and secretary and did not warrant a code change. Several senators knocked on tables in support of her speech.

Sen. Salaar Khan ’24 also brought up how knocking can be an inclusion issue.

“I’m legally blind…I can’t read the room like from body language or people nodding their heads or expressions, so knocking actually has been really helpful for me,” Khan said.

SA did not pass the Person First Student Second Act, sponsored by Armstrong, Class President Mia Tilman ’24, Class President Suhas Suddala ’22, and Sen. Gloriana Cubero Fernandez ’24, which would have lowered the threshold of Senate meeting absences to have articles of impeachment automatically introduced but restrict the absences counted towards this threshold to only unexcused ones.

Senators stressed that they didn’t want to make major code changes at the very end of a session.

Finally, the Outdoor Furniture Act, sponsored by Fox, was tabled at the announcement by Director of Student Leadership Development Anne Arseneau ’89 MA.Ed ’92 that “furniture purchasing is very rigorously monitored at William & Mary, under tight control,” and that the furniture requested by the act would have to be purchased from an approved vendor.