Thursday, March 31, John Cho ’23 and Jasmin Martinez ’23 clinched the Student Assembly presidential and vice presidential race, beating out Class of 2023 President Conor Sokolowsky ’23 and Bryce Earley ’23, as well as current SA Deputy Secretary for Outreach and Campaigns Mikayla Fulcher ’23. This was the first election in three years to be contested.

“I think the first thing that comes to mind is we want to thank all of our leadership team and every voter who went out and voted for us,” Martinez said. “I think coming into the school… John and I have talked about this multiple times, but as a freshman, we would never have thought this. We are just so appreciative of every single person who supported, who reposted, who talked to their friends about it. Like I think this is beyond our wildest dreams and we’re so excited to do the work that we’ve been wanting to see done at the school.”

“we want to thank the other candidates for all their genuine and hard work and for making us better candidates as well. I’m really excited to just move forward together as a community.”

“We also want to acknowledge that this election was difficult and challenging,” Cho said. “But we want to thank the other candidates for all their genuine and hard work and for making us better candidates as well. I’m really excited to just move forward together as a community.” 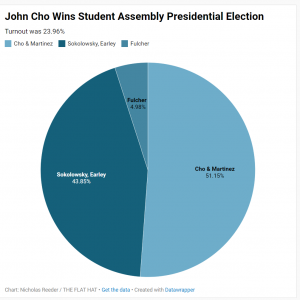 “I’m just happy,” Fulcher said. “Like the whole reason I ran was for students to kind of start thinking a little more and give more options for candidates, because in the past it’s only been one person running. So I think just having three people running just shows it’s something that students should probably care about a little bit more.”

Sokolowsky thanked his team for helping research and create their platform, and says he hopes the Cho-Martinez administration takes up some of their ideas and carries them forward.

“that really should be a priority of anybody in student assembly in the next years…. to get more people engaged, get more people excited about what’s happening on campus and what we can do to change campus for the better.”

“I was a little bit shocked actually at voter turnout,”  Sokolowsky said. “23% was like staggeringly low. So I don’t know… I was a little bit shocked at that. And it kind of just goes to show what kind of a bubble student assembly is. And that really should be a priority of anybody in student assembly in the next years…to get more people engaged, get more people excited about what’s happening on campus and what we can do to change campus for the better.” 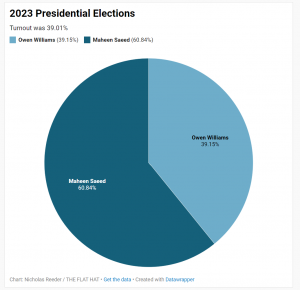 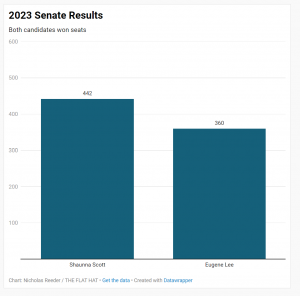 With only two candidates running, there are two remaining vacancies for the class of 2023 senator positions. 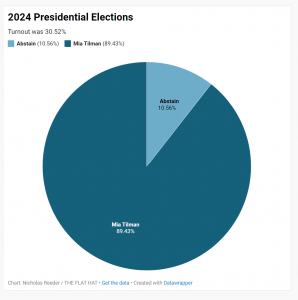 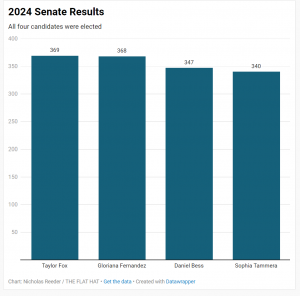 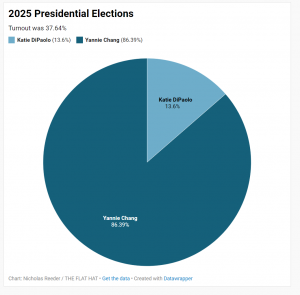 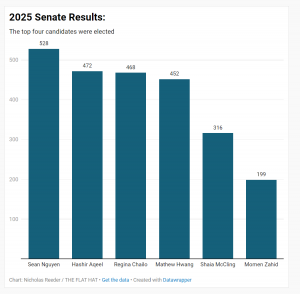 Correction (3/31): The class of 2025 senate race graph had Matthew Hwang ’25’s name mispelled as “Hwnang.” The graph was corrected and re-uploaded with the correct spelling.