When William and Mary women’s soccer freshman forward Ivey Crain arrived in Williamsburg, head coach Julie Shackford had high expectations for the young player, but did not quite know how much she would excel at the College.

“You never quite know how freshmen are going to perform their first game,” Coach Shackford said. “But in the first game she was shot out of a cannon. I call her the ‘live wire’ because she is always where she is supposed to be and finds a way to score.”

Crain finished her first season with 24 points on nine goals and six assists, the most points since 2011. Her nine goals are the most by a William and Mary true freshman since 2005. Last month, Crain was named the CAA Rookie of the Year and a member of the All-CAA First Team.

The freshman ranked second in the conference in points and third in goals throughout the season, but led the conference with 15 points in league play. Among all NCAA freshmen, Crain finished fourth in points and tied for fifth in goals scored. Those statistics translated to 62nd and 59th in the country overall. Halfway through the season Top Drawer Soccer ranked Crain at No. 51 in their list of top-100 freshmen.

“She is already a leader in terms of her production,” Shackford said. “Our recruits all talk about her.”

Crain finished the regular season with a shot accuracy of 62.2%, good enough for 16th in the country.

“Everyone on the team was excited knowing they had someone to rely on to be dangerous and give us a chance every game,” Shackford said.

According to Crain and Shackford, team chemistry played a key role in the team’s success this year.

“My first impression of the team was that it was a very family-like environment which made it easy to transition from my high school in Georgia to a college in Virginia,” Crain said. “The chemistry was always there and improved as the season went along.”

Crain emphasized the important role of Shackford and the rest of the coaching staff on creating a welcoming atmosphere.

“The encouragement, leadership and passion that all of our coaches have for the game and team is a critical part of who we are as a team,” Crain said.

Shackford echoed a similar sentiment about Crain, too.

“She is a great kid, a great teammate and has an awesome energy about her that attracts teammates and coaches,” she said.

After qualifying for the CAA tournament for the first time since 2017, the seventh seeded Tribe lost to second seeded Drexel 2-1 in the first round. During the game, Crain managed three shots, with one on goal. She also received credit for the assist to graduate student Cricket Basa, who scored the only Tribe goal of the game. Crain played 87 minutes against Drexel.

Reflecting on the season, Crain views the team’s home opener against Virginia Tech as a pivotal game for her personal growth as a player.

“Scoring twice in one of my first couple games here at William and Mary made me feel like I could really make a difference and help the team,” Crain said.

“I am honored and humbled because there are many players that were amazing candidates they had to pick from,” Crain said about all her CAA accolades.

With an eye to next season, Shackford believes Crain can significantly build on her rookie campaign.

“We are going to work on her technical skills so she can improve her passing, and also get her stronger in the weight room,” Shackford said.“She has potential to score double or triple what she did this year if she can get the little parts of her game sharper.”

Zooming out to the prospect of the team’s success for next season, Shackford remains optimistic.

“We are very excited for next fall and for all of the student-athletes our team has recruited,” Shackford said.“The next step is more consistency and playing with a championship attitude every day.”

Crain hopes to carry the team’s momentum from this season into next year.

“My expectations are extremely high for this team next season because of the work ethic and foundation that this team has built in the last couple years,” Crain said. “I believe that we will continue to grow as a team and can’t wait for next season.” 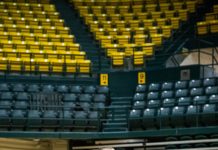