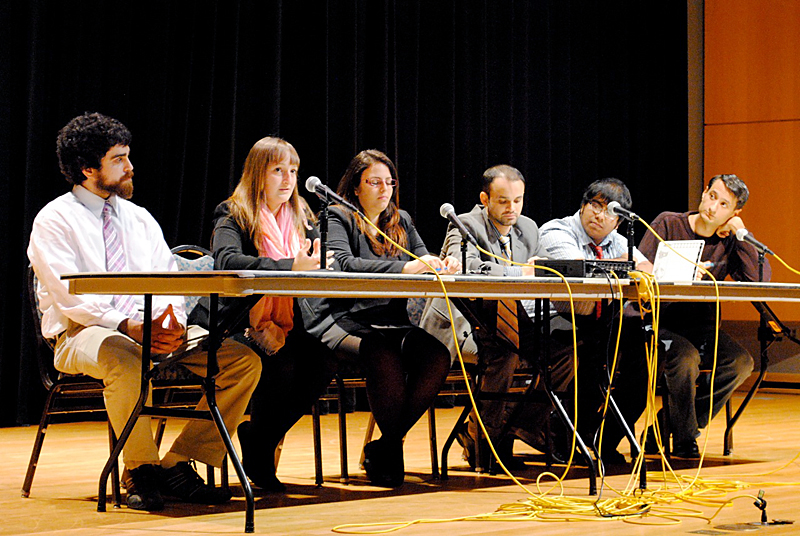 The panelists opened with a discussion about the racial profiling  that has occurred at airports following the events of 9/11.

“I believe that ethnic profiling by the government has one purpose — to break people apart. We, as a society, actually allow this,” Fulbright Scholar and Arabic House tutor Raneen Abu Khadra said.

“You might not be of the minority being targeted, but it is important to still stand up for each other’s rights because when one minority is targeted, all minorities are targeted,” Dejwakh said, “I would like to see a change in the concept of what an American is. We are Americans no matter where we are from. We are all here in this country together. I do not think racial profiling is acceptable in any situation.”

The panelists voiced their opinions about the protests advocating  for democracy in the Middle East. Atif Chodbury J.D. ’15 , who has been interested in Middle Eastern relations his entire life, feels the countries in the Middle East have their own reasons for protesting.

“Different people revolt for different reasons,” Chodbury said. “They want the same things as we do. Many countries have never had an election, and they are fighting and dying just to have that. I think we [the United States] can take the time to connect with them.”

Mohammad Torabinejad ’11 believes the people in the Middle East are transitioning and need time to adjust.

“Democracy takes time and we have to let societies and countries deal with that in a way that respects their views,” Torabinejad said.

Panelists discussed whether the United States should intervene in conflicted countries like Syria.

Dejwakh feels that the United States should take a hands-off approach to the conflicts in the Middle East.

Chodbury expressed his desire for action in between getting involved and taking a step back.

“We are involved in the Israel and Palestine conflicts,” Chodbury said. “We have the leverage over Israel to push them to change their policies; however, we don’t have to put our men and women in uniform in danger every time a massacre happens. We have to be practical but proactive.”

Khadra’s felt differently, stating that the United States should have complete involvement in Middle Eastern conflicts.

Peace in the Middle East Week continues with more festivities including movie showings, concerts, political talks and bake sales, all to promote the culture of the Middle East.

“We wanted people who were not that much older than us to talk to show that they are involved, so that other students can realize that they can get involved, too,” Moinzadeh said.