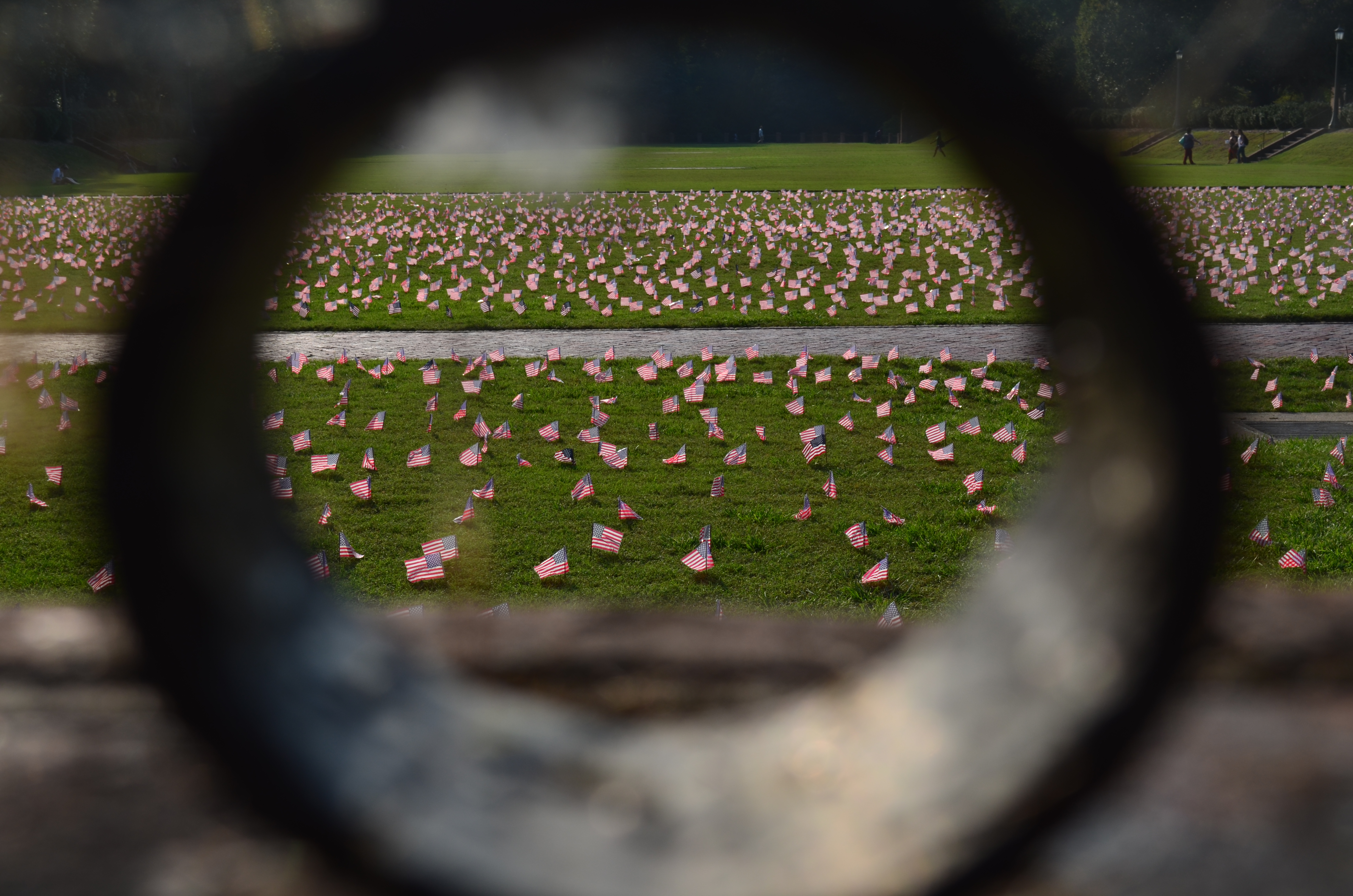 You’re walking to your 9 a.m. class on Wednesday morning with one ear bud playing your favorite song in your ear, and coffee in hand to keep you awake.  Your head is held down in a semi-conscious state. Mornings like this are typical, but today you notice something different.

The area around the Sunken Garden is quiet, and even with your music playing, you notice the eerie stillness of the morning. Then you look up. The Garden is filled with tiny American flags, and a wreath stands atop its stone steps.

Suddenly, you see them.  Men and women guard the wreath and with it, the memory of 9/11. You watch as they change guards, never once leaving the wreath unprotected. You stop your music to hear them shout drill commands.

“Parade rest. Attention. Right shoulder arms. Forward march. Other arms. About face.” The moment is surreal, but you can’t help wondering about these people standing guard in red uniforms. They are the Queens’ Guard of the College of William and Mary, and they are steeped in rich history, much like the College they represent.

“In 1957 the Queen (Queen Elizabeth II) came to the College and wanted to create her own guard out of the Army Cadets that were here,” Queens’ Guard member and ROTC Cadet Casey McGarth ’14 said. “She picked out Army cadets that would be her informal escort while she was here, and when she left, she donated a bunch of the Scots Guard uniforms to the College of William and Mary.”

In 1961, following the Queen’s visit, College President Davis Paschall announced the formation of a special unit of the Reserve Officer Training Corps to be called the Queens’ Guard.

The Queens’ Guard, like the College itself, has always represented both old and new.  Fittingly, the Guard updated the uniforms given to them by Queen Elizabeth II while maintaining their historical integrity.

“[Paschall] wanted new uniforms to be created that would be significant to the College itself,” McGarth said. “On our red jackets, instead of silver buttons, we have groups of three gold buttons representing the three queens: Queen Mary, Queen Elizabeth II and Queen Anne, who gave a large sum of money to the school to keep it running.”

At the Guard’s inception, it was comprised solely of Army ROTC cadets. Over time, it began to attract both cadets and civilians of the College. In the 1980s, the Queens’ Guard joined with the National Society of Pershing Rifles.

Jason Kelly ’14, a civilian member of the Guard, has been part of the Guard longer than any of his fellow guardsmen.

“We have a total of six members who are civilians,” Kelly said. “It is a civilian military organization, which is good because it fosters relations between the military on our campus and civilians.”

However, with only six civilians out of the 20 members of the Queens’ Guard, the organization is looking to recruit more civilians.

“We have interest meetings and people see us on campus,” McGarth said. “We also have a website so that people can contact us through that if they want to join, or they can come to us at events and talk to us.”

Members of the Queens’ Guard drill once a week in preparation for their ceremonies, which include presenting the national colors for football games, leading the Homecoming parade, and standing guard at the wreaths for the 9/11 and Virginia Tech memorials.

“We take it very seriously and we make sure that we are as professional as we can be,” Kelly said. “It is not really just for us; it is to honor the spirit of the College, to honor the alumni, to honor the opportunities that they have given us.”

In addition to these ceremonies, the Queens’ Guard hopes to take part in more events on campus.

Furthermore, the Queens’ Guard plans to participate in more outside activities.

The sense of honor and commitment is something the men and women of the Queens’ Guard cherish as they stand in front of the wreath protecting the memories of all those affected by 9/11.

“This will be the last memorial that I will stand and that holds a significant place in my heart,” McGarth said. “I like to be a part of an organization where I know that everyone else in that organization willingly will get up, put on a thick red uniform, and stand outside because they want to do that and they are proud to do it.”

However, because the members of the Queens’ Guard are students, they faced difficulties scheduling an adequate number of members to guard the wreath.

“A lot of the members are in ROTC, and ROTC lab is Wednesday afternoon, so our non-ROTC members had to pull a few hard shifts,” McGarth said.

For members of the Guard, these ceremonies are an expression of dedication, pride and commitment. They view their services as a form of giving back to the College.

“It is a small way for us to give back to the College, and in a traditional sense it is helping the spirit of the College continue,” Kelly said.

To honor is to serve: Students watching Queens’ Guard members safeguard the 9/11 memorial wreath seemed to appreciate their service and commitment. Throughout the day, bystanders gathered to take pictures of the Guards as they marched before the rows of flags lining the Sunken Garden.

“I find this emotional and inspiring,” Kassandra Leal ’16 said. “It really hits you when you see two men that are willing to stand in this heat just to do something like this. I hope that people are taken back by this, too. I hope that we recognize that it’s a big thing [9/11] that happened, not only to us as a country, but in the world.”