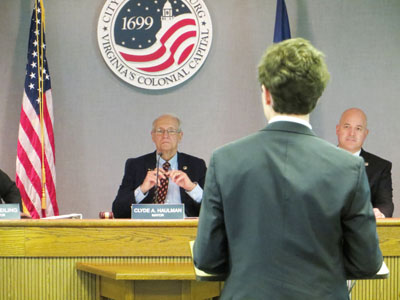 In its annual proposal to the Virginia state legislature, the city of Williamsburg is asking for increased support for tourism and transportation during the 2014 session. The city also looks to extend more support toward the College of William and Mary.

Williamsburg Mayor Clyde Haulman said he wants to see more support given to tourism for the city and the Historical Triangle.

“We are looking to increase support of tourism in the city by adjusting the sales tax on hotel rooms in the city,” Haulman said. “We believe this will increase funds for the city to assist in supporting the tourist industry in Williamsburg. We already have a great tourist system, but we want to keep it that way.”

The city also hopes to improve its transportation system.

“A few years ago, we in a sense renovated the Williamsburg Trolley system to decrease lag time between stops. Now we are looking to expand the bus system and increase run times,” Haulman said. “Also, we are looking at the times in which the bus should be running, as in how late it will run and how early it will run.”

Haulman said he believes expanding the city’s transportation system will greatly help students get around the city.

“The buses only run once an hour, and they’re generally irregular about being on time,” Amanda Foody ’15 said. “Having buses run more often would make it more convenient to leave campus on days when I have class, not just on weekends.”

The city supports the state’s proposed plan to expand I-64 from Richmond to Newport News. The city wants to continue supporting the Virginia Intercity Passenger Rail Operating and Capital Fund, which allows Amtrak to stop in the city, as reported by the Williamsburg-Yorktown Daily.

One of the Council’s requests to the state legislature is to increase funds for the support of the College.

According to the Williamsburg Yorktown Daily, the city is looking to increase faculty and staff salaries as well as to support construction projects on campus.

“[William and Mary] students comprise a large portion of the city and give back to a lot of its activities in terms of service and participation, and I think other students would really love to see the city help out in any way for the college,” Foody said.