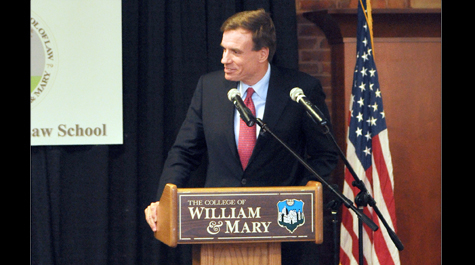 Law schools from around the country were represented at the event, which featured a keynote address from United States Sen. Mark Warner, D-Va. Approximately 125-130 individuals attended during the free, two-day conference.

“We were hoping that not only other law schools, but other law firms, would be encouraged to provide legal services to veterans,” Robert said. “While we are providing … those services in order to obtain veteran disabilities benefits, we also highlighted several other clinic models so that the attendees could have choices to figure out what works best for them.”

Law professor and managing attorney at the Puller Clinic Stacey-Rae Simcox said she believes that the major flaw in the veterans benefits claims system is its complexity. She also noted that lack of legal representation makes it incredibly difficult for veterans to navigate the process.

“Veterans are not permitted (by law) to hire lawyers to help them until about a year into this process and by then the damage may have been done and take several years to unravel,” Simcox said in an email. “Having law students who understand this complicated process and think like lawyers help these veterans at no cost is the perfect solution to this problem.”

Director of the Puller Clinic’s Helping Military Veterans through Higher Education consortium John Cimino also attended the conference. He served on a panel and worked to collaborate and connect with other disciplines and schools present at the conference. Additionally, he was able to interact with some veterans after the conference.

“On Saturday, some of us stayed for a little extra time and we did an outreach event, where we met with a group of veterans from the D.C. area who are either homeless or at risk of homelessness,” Cimino said. “We talked to them about veterans benefits eligibility and gave people who appeared to have legitimate benefits claims guidance on how to obtain them and link them up with other groups in the area who can assist them with the process.”

Acting Director of the Center for Psychological Services and Development at Virginia Commonwealth University Mary Beth Heller said she thought the conference was well-received. She added that she is looking forward to continued collaboration with the College, as therapy and psychology programs are core components of the Puller Clinic’s model. Heller served on two panels at the conference.

“The first we presented on PTSD and Traumatic Brain Injury — how these disorders are defined and diagnosed, and how they appear in military veterans,” Heller said in an email. “On the second we briefly described our model of collaboration with W&M’s Puller Clinic and responded to audience questions about our work.”

Roberts was also pleased with the overall response to the conference. She explained that she looks forward to utilizing connections made through the program.

“We are just getting some very positive feedback about the conference itself and how much people took away from it and an eagerness to keep in touch and further develop this community,” Roberts said.

Post-graduate fellow at the law school’s clinical programs Diana Cooper J.D. ‘13 described the positive feedback she received from other lawyers present at the conference.

“The presenters all had a great deal of experience in this area of law,” Cooper said in an email. “They were eager to share experiences and were responsive to those who asked questions.”