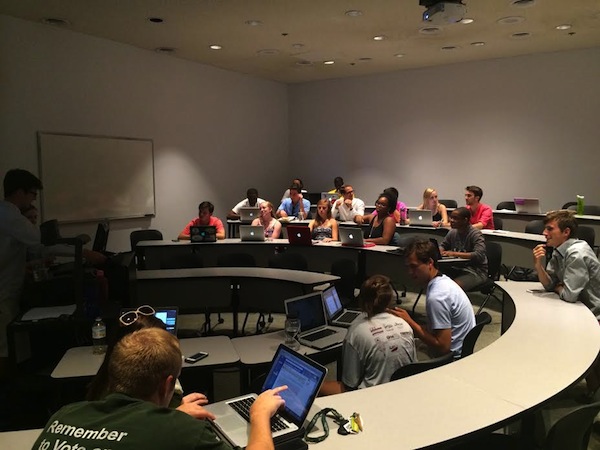 The Student Assembly Senate approved two bills during its meeting Tuesday night, including The Victorious Vans for Soccer Fans Act and the Homecoming Grants Act Round 4.

The Victorious Vans for Soccer Fans Act, sponsored by Sen. Seth Opoku-Yeboah ’16, provides students with free transportation to the College of William and Mary Men’s and Women’s soccer games at the Martin Family Stadium. The bill allocates a total of $1,350 to provide vans, gas and drivers to the games.  That total will cover transportation to nine soccer games.

“This is a great opportunity for us to provide a wonderful service to students who would otherwise want attend these games, but maybe couldn’t, because it is a fairly dangerous walk or bike ride,” Morey said.

Sen. Nadia Illunga ’15 recognized the benefits this bill will have for freshmen interested in supporting Tribe sports teams.

“Specifically for freshmen, this will be a wonderful opportunity, as they often don’t know upperclassmen with cars, but they’re really excited to go to games,” Illunga said.

The Homecoming Grants Act Round 4, sponsored by Sen. Daniel Ackerman ’16, was also discussed during Tuesday’s meeting. The bill works to get more campus organizations involved with Homecoming by supplying them with grants to execute campus-wide events during the week of Homecoming.

Ackerman explained that the effort to extend Homecoming grants has been a work in progress.

“We’ve worked ahead and improved the project a little more every year,” he said.

Additionally, the Homecoming Grants Act Round 4 updates the application review and grant allocation processes. Last year, senators said flawed communication between the Executive and Senate branches of the SA plagued the process. In the past both the Executive Student Life Committee and the Senate Finance Committee were charged with allocating the grants; however, the groups had differing opinions on which groups should receive grants.

Sen. Yohance Whitaker ’16 offered his support of the bill and addressed the improvements made to communication.

“What I really like about this bill … is that accountability is really important,” Whitaker said. “We know who’s making the decisions. And we don’t have to go through this back and forth between finance and student life.”

In the Homecoming Grants Round 4 Act, a defined group, including SA members from both the Executive and Senate, will review grant applications and bestow Homecoming event funds. That group will include the Secretary of Student Life, the Chairman of the Student Life Senate Committee, the Secretary of Finance, the Chairman of the Senate Finance Committee and a representative from the SA’s Executive Leadership.

Ackerman assigned the bill to the Finance and Student Life Committees.

At Tuesday’s meeting, Senators also confirmed two Executive Cabinet Nominees. Edward Linnecke J.D. ’16 and Lacey Coppage J.D. ’16 were both confirmed as members of the review board.