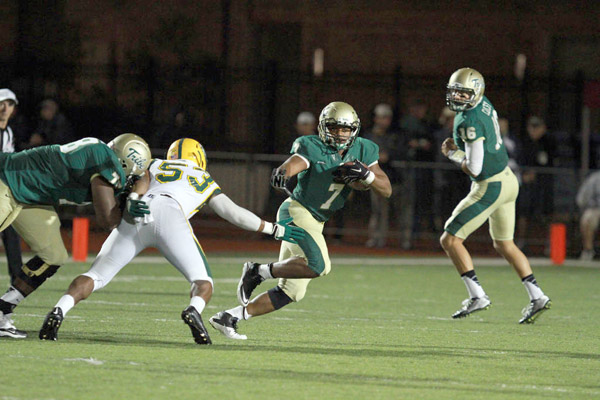 Outgained by 88 yards, producing a lone touchdown and managing just 37 yards in the second half, William and Mary shouldn’t have beat Norfolk State Saturday night.

Intangibles, though, fell in the College’s favor. An interception returned for a score, a safety and a blocked field goal for a score sent the Tribe (2-1) past the Spartans (0-3), 29-14, in front of 8,254 fans at Zable Stadium.

“[I’m] pleased we got a win, pleased we’re 2-1, pleased we opened up 1-0 at home — all those things [are] good,” head coach Jimmye Laycock said. “I was not pleased with the overall play. I thought there were times, especially defensively, when we played very well. Offensively, we started off alright and then couldn’t get anything going.”

Cluley redeemed himself in the Tribe’s ensuing drive, hitting senior wideout Tre McBride for a 55-yard strike that evened the score. McBride returned from an injury sustained against Virginia Tech in the season-opener.

“I felt good. Coming back from injury, first game, it feels good to be back on the field helping the team win,” McBride, an all-conference selection last season, said. “From here on out, it’s just going to be preventative treatment … there’s no issues on my part as far as health goes.”

McBride finished with six catches for 101 yards, leading all receivers and accounting for all but 65 of the College’s passing yardage.

Apart from McBride and junior tailback Mikal Abdul-Saboor’s 70 yards on 19 carries, the Tribe’s offense was largely absent. The defensive and special team units outscored the offense, 16-6, the rest of the way.

“Games are different, games unfold differently,” Laycock said of the non-traditional scoring. “Things happen — you have to be able to adjust to them.”

Cluley and the offensive unit strung together an eight-play, 66-yard drive that ended in senior placekicker John Carpenter’s 31-yard field goal early in the second quarter. Cluley, who finished 12 of 27 for 166 yards and an interception, left Laycock expecting more.

“He was on target with Tre [McBride] a couple of times, and made a couple of nice throws, but, for the most part, [Cluley] wasn’t on target as much as I’d like for him to be,” Laycock said.

The second half featured much of the same. Senior linebacker Airek Green, Colonial Athletic Defensive Player of the Week after last week’s performance, logged a safety with 2:21 remaining in the third quarter.

Carpenter’s second field goal capped a ten-play, 34-yard drive, giving the College a 22-7 lead entering the fourth quarter. The drive accounted for the majority of the Tribe’s second-half yardage.

With the offense struggling to gain a foothold, junior cornerback DeAndre Houston-Carson and the special teams unit scored the Tribe’s third touchdown of the night off of a blocked field goal.

“They kind of just let me go and we did what we’ve been practicing since camp,” Houston-Carson said. “[I] just got a hand on it and Ivan [Tagoe] took it to the crib.”

For its part, Norfolk State moved the ball well throughout both halves. Aaron Daniels paced the Spartans with 106 yards on the ground. Quarterback Terrance Ervin completed 16 of 24 passes for 176 yards, but also threw two interceptions.

Terry Polk’s one-yard rush capped the evening’s scoring, amounting to little more than decreasing the 22-point deficit. Still, the score marks the third consecutive week the College has allowed at least 14 points. Last season, the Tribe allowed less than 14 points in five of its 12 contests.

“We definitely have some things to clean up,” Houston-Carson said. “We just made the plays when they counted. We need to be critical of what we’ve been doing and improve from here.”

The College returns to Zable Stadium for its fourth and final non-conference matchup Saturday. Kick off is set for 7 p.m.