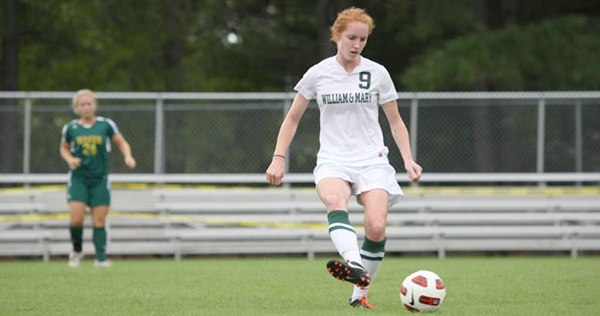 Shaughnessy opened the game’s scoring, thanks to freshman forward Sami Grasso and senior forward Emory Camper’s assist. Camper’s shot deflected off the post back to Grasso, who then passed it to Shaughnessy. From there, Shaughnessy was able to get the ball past the goalkeeper, placing the shot in the top left corner for the lead eight minutes and 40 seconds into the opening half.

“We started well and then I thought we dropped off and they were playing the ball much quicker and they were pressing us much better in midfield for a lot of the first half,” Daly told Tribe Athletics. “We were a bit fortunate, really, to turn around on top. But [Cordum] is so dangerous [and] she causes problems whenever she’s on the field.”

Cordum stole possession and found the top left corner of the net just two minutes before the end of the half.

Spider midfielder Samantha Cicconi robbed the Tribe of a shutout 26 minutes into the second half, scoring off a corner. Shaughnessy answered with another goal, this time assisted by sophomore midfielder Haley Kavanaugh and freshman defender Haley Kent.

“We’ve been talking to our midfield players about getting forward,” Daly told Tribe Athletics. “When an attack goes up they need to get into the box, and that’s what [Shaughnessy] did twice … so good for her.”

Daly noted the importance of the breaking the game open with just a one-goal lead.

“When it was 2-1 … the next goal was going to be very, very important,” Daly told Tribe Athletics. “If we get it, the game is pretty much over, if they get it the game is far from over, and fortunately… we got a great, great connection down the left-hand side and we got that all-important goal.”

Shaughnessy credited her success to the team’s practice regimen.

“We’ve been working with the midfield on getting forward so that’s basically what I did,” Shaughnessy told Tribe Athletics. “We got the ball, I think both times, across the face of the net and I was just there to finish it, which is what we’ve been working on in practice.”

The College’s defense restrained the Spiders’ offense from returning the favor during the second half of the game.

“It’s really important when the game is coming to an end that we keep the ball out of our half and I think we did a good job of that today,” Shaughnessy told Tribe Athletics. “We didn’t do a good job of that against LaSalle. We weren’t good at clearing it out so that’s how they scored against us then.”

Cordum closed the deal with another unassisted goal in the 81st minute, making it a 4-1 Tribe advantage. Cordum fired into the middle of the net after stealing possession of the ball once again.

“She played awesome. [Cordum] is such a force up top — she is so fast, she’s so strong and she really brings a lot of energy up top for us. It’s great,“ Shaughnessy told Tribe Athletics.

The Spiders attempted 14 shots on goal, five of which were blocked by the Tribe’s defenders. Four went off target, with four more saved by junior goalkeeper Caroline Casey.

“I’d like to have kept a clean sheet but I’m going to be satisfied with a 4-1 win,” Daly told Tribe Athletics.

The College travels to Penn Sunday. Kickoff is set for 2:30 p.m.