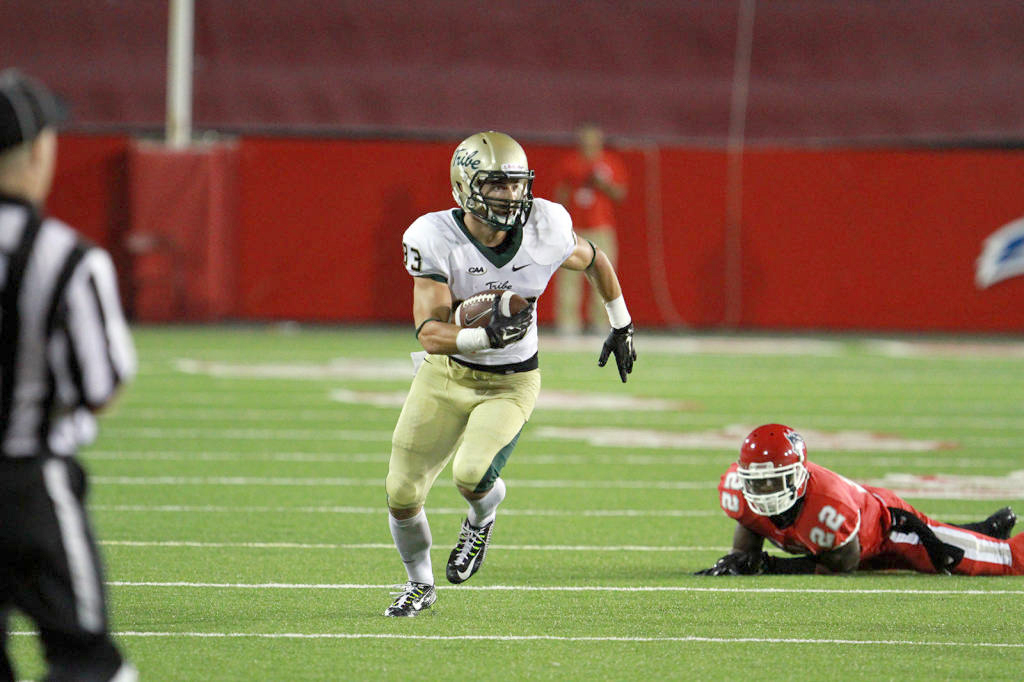 The game was all but over for William and Mary in Stony Brook, N.Y. Saturday. A Stony Brook 33-yard touchdown run erased a furious Tribe comeback effort, leaving the College with a 21-14 deficit with just 72 seconds remaining. After winning three consecutive games in progressively chaotic fashion, the Tribe (4-1, 1-0 CAA) needed a rare level of heroism to stay alive and pick up its first Colonial Athletic Association win.

When all hope seemed lost, senior receiver Sean Ballard changed the game’s outcome. The senior — often obscured by teammates such as senior receiver Tre McBride and junior running back Mikal Abdul-Saboor — shone brightest. With 34 seconds left in the game, Ballard grabbed a 10-yard pass from sophomore quarterback Steve Cluley, whipped around his defender, and raced up the right sideline. Ballard sprinted past the Seawolves’ defense and into the endzone for a 52-yard touchdown, a 21-21 tie and new life.

The game moved into overtime, where the Tribe defense smothered Stony Brook and blocked its ensuing field goal attempt. Holding the ball at the 25-yard line and needing just a field goal to win, the Tribe turned it over to Abdul-Saboor.

After a Seawolves facemask penalty gave the College a first down at the 12, Abdul-Saboor blitzed his way into the endzone to secure the 27-21 win. The touchdown was Abdul-Saboor’s second of the day. Abdul-Saboor finished with 116 yards on 26 attempts to lead the College’s offense.

Cluley finished 21 of 32, with a career high 243 yards, a touchdown and an interception. Ballard led the College with 92 yards on six catches, while freshman receiver Devonte Dedmon finished with four receptions for 67 yards.

Despite the thrilling finish, the game started disastrously for the College. The Tribe’s first possession collapsed deep in Stony Brook territory, when Cluley misfired in the endzone and Stony Brook’s Davonte Anderson corralled the interception. The turnover put the Seawolves on their own 20, and the offense effortlessly drove 80 yards to take a 7-0 lead on Marcus Coker’s nine yard touchdown run.

After the College’s next drive ended with a punt, Stony Brook struck again. Adrian Coxson streaked raced past the Tribe defense and hauled in an 83-yard bomb for another Stony Brook touchdown, leaving the Tribe with a 14-0 deficit.

The Tribe couldn’t muster any offensive firepower in the second quarter. At the start of the quarter, the College punted after three plays and settled for a field goal to cut the deficit to 14-3. As Stony Brook entered halftime with a 14-3 lead, the Tribe appeared unable to mount any meaningful resistance.

The Tribe offense woke up after halftime. The College worked its way to the Stony Brook three-yard line, and senior kicker John Carpenter’s 29-yard field goal made the score 14-6.

With the offense showing signs of life, the Tribe defense also picked up its performance. After struggling to contain Stony Brook early in the game, the College held the Seawolves to just 36 yards in the third quarter.

After two stalled Stony Brook drives, the Tribe started a critical possession at its own 20 late in the third quarter. Abdul-Saboor started the drive by catching a screen pass for 16 yards, and a roughing the passer penalty moved the ball to the Seawolves’ 49-yard line. Two plays later, Dedmon hauled in a 45-yard reception to move the ball to the Stony Brook goal line, and Abdul-Saboor immediately crashed into the endzone. The touchdown cut Stony Brook’s lead to 14-12, forcing the Tribe to attempt a rare two-point conversion.

Events then turned dramatic. In a bit of ingenuity, Cluley handed off to Abdul-Saboor, who rolled to his left and handed off to a streaking McBride. McBride lofted a throw to an open Cluley, who reeled in the pass to tie the game at 14. The wide receiver’s pass caught the Seawolves by surprise, and the gamble tied the game with eight seconds left in the third quarter.

As the fourth quarter commenced, both sides failed to make a dent in the 14-14 stalemate for several minutes. However, the Seawolves finally drew blood with 72 seconds remaining, as Stacey Bedell dodged two diving Tribe defenders and sprinted up the right sideline for a 33-yard score. The play protracted the Stony Brook lead to 21-14.

That was when fate — and Ballard — intervened. His touchdown staved off defeat, and Ballard’s teammates did the rest in overtime. After the dust cleared, the Tribe left New York with its most dramatic victory of the year, and with its early season winning streak intact at four.

Cluley’s 32 passing attempts was a career high, and he completed 66 percent of his throws for an average of 7.6 yards per attempt. Despite being forced to throw on the Tribe’s final drive, the sophomore was accurate and put his team in position to win. While Abdul-Saboor carried the Tribe offense in overtime, Cluley proved his worth.

The Tribe will be idle next weekend, taking a week off following an intense series of games. The College next travels to Durham, N.H. to take on New Hampshire Oct. 11. The Tribe will return to Zable Stadium Oct. 18, when it faces Villanova on Homecoming weekend.