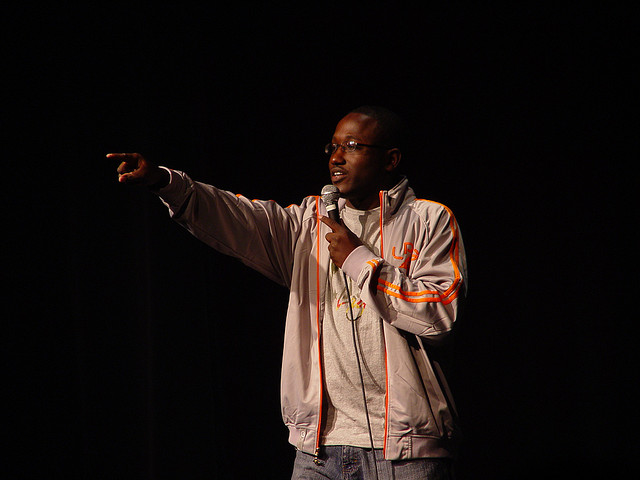 Cannibalism isn’t funny, but Hannibal came to make us laugh. Saturday Oct. 18, doors opened at 7 p.m. and the show started at 8 p.m. at Lake Matoaka Amphitheatre. Hannibal Buress came equipped with an opening act, a DJ and three ballerinas. For $3 a student could enjoy an hour and half of comedy appropriate for college.

The event was sponsored by AMP, which decided to shake up the Homecoming schedule this year. Instead of holding the usual concert they invited Hannibal Buress, a comedian who has been featured on “Late Night with Jimmy Fallon,” “Conan” and “Jimmy Kimmel Live!.”

With leftover money allotted by the Student Assembly for AMP-sponsored projects it was decided last year to invite a comedian rather than have a Homecoming concert.

Kelsey Wilkinson ’15, chair of AMP’s comedy committee, was excited for Hannibal to perform at the College of William and Mary.

“Hannibal has a lot of the big name recognition which not all of our small comedians have,” Wilkinson said. “He definitely has a steady pace going to his career. He was on ‘Broad City’ and he was just in the movie  ‘Neighbors’ … We thought that he was new and had a good name.”

Despite his recognition and his resume, booking Buress wasn’t a problem for AMP.

“It was a pretty simple process. We talked with the vendor and agents before booking them,” Wilkinson said.

Saturday night’s show started off a little late. At 8:15 p.m. the opening act took the stage.

“It seems William and Mary overestimated my draw,” Buress said to open his act, referring to the number of students in the audience. “I don’t care. The check is still for the exact same amount,” he said.

Yannis Pappas opened up his act with jokes about adulthood now being a “period of extended youth.” He began discussing some of his political views by saying he was pro-gun, which caused some students in the audience to give side-glances to one another.

Pappas followed the statement with saying that he was also pro-gun control, which was followed by sighs of relief. In the middle of the performance there was a dip in laughter, but at the end of his 45 minutes Pappas was exciting the crowd for Buress.

Buress began with the typical pleasantries and some cracks about Williamsburg’s city life. He drew laughter from the audience when he vocalized his support for the use of steroids in sports.

He pointed out that when athletes are using illegal enhancements they are usually winning or breaking records.

He went on to say fathers and sons will forever remember when their favorite player made an amazing play to win the entire game.

It doesn’t matter if the athlete was on steroids, Buress said. He gave a special moment to a father and son.

The show continued as Buress recounted what confused him. He didn’t seem to understand why asthma was the only disease one could make fun of.

He said that if you laugh at someone who just used his or her inhaler, you find it funny that he or she didn’t die. Buress himself suffers from asthma.

Buress also made it a point to say that telling someone his or her zipper is down shouldn’t make one feel better about him- or herself. Buress told a story where he was walking through a city and a homeless man told him that his fly was down.

“Well, your life is down,” was all Buress could say.

Soon after, he ended his show by delivering a personal rap song with background ballerinas from the College’s Pointe Blank Dance Company.

Responses to his show were positive. It was easy to hear friends reenacting skits as they walked away from Lake Matoaka. Eric Zybko ’18 brought two friends who hadn’t heard of Buress.

“I just like exposing people to culture and different perspectives,” Zybko said. “Honestly Hannibal Buress is  my favorite comedian so I just felt it was fun sharing good comedy.”

Ariana Kuhnsman ’18, a very big fan of Buress’s, enjoyed the show because she said it was fresh, even for a fan.

“I loved it because he brought a lot of new and original material,” she said. “He appealed to a lot of people.”