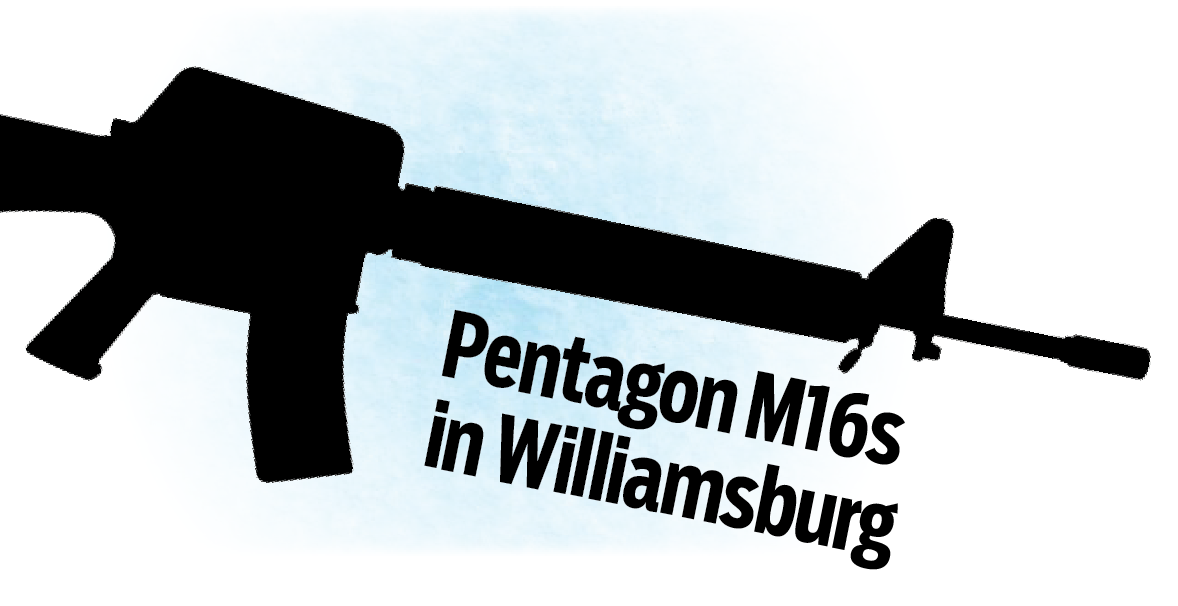 With national media attention focused on police militarization in the wake of the shooting of an unarmed black teenager in Ferguson, Mo., special scrutiny has been leveled at the Pentagon Excess Property Program, otherwise known as the “1033 Program.” Both the Williamsburg Police Department and the William and Mary Police Department have received M16 rifles through this program.

The program, facilitated by the Defense Logistics Agency, was authorized in 1990 to assist local law enforcement agencies with counter-drug operations. In 1997, Section 1033 of the National Defense Authorization Act authorized the transfer of excess Department of Defense property to federal and state agencies to assist with counter-drug and counter-terrorism operations. Michelle McCaskill, media relations chief for the Defense Logistics Agency, said that more than 8,000 law enforcement agencies participate in the program.

According to a report by the Chronicle of Higher Education, 117 schools across the country have received equipment from the Pentagon program, including 63 that have received M16 rifles.

Including William and Mary, five schools in Virginia have acquired M16s.  The University of Virginia police department received twelve guns from the Pentagon. Virginia Tech, which experienced an active shooter incident in 2007, did not receive any weapons from the program.

According to Williamsburg Police Department spokesman Greg Riley, the department acquired seven M16 rifles through the program in 2004 — to add to the two the department already possessed — to ensure that every patrol car carried an M16. The weapons, the military counterpart to the civilian AR-15, were converted to allow for only semi-automatic fire upon receipt.

According to Riley, the department sought out the weapons to respond to a potential active-shooter situation; however, the weapons have been taken out on patrol for other purposes.

“We don’t have a policy that dictates you will use [the rifles] in situation x or you should use them in situation y because we don’t want to remove discretion,” Riley said. “There may be circumstances where an officer takes one out, and after those circumstances dissipate you have a different situation. You wouldn’t want to discipline someone for, you know, you took a weapon out when you weren’t supposed to.”

The department, citing security concerns, would not release the magazine capacity of the M16s or the number of hours of training that officers receive.

Four years after the Williamsburg Police Department acquired M16s, the William and Mary Police Department also applied to the 1033 program, receiving four M16 rifles in 2008. Those weapons, which the department received without cost, have remained unused in a safe  since they were acquired. They are not in active use.

“Soon after WMPD received the four M-16 rifles in 2008, the police department had the opportunity to replace their handguns with a weapon that had a compatible carbine semi-automatic rifle,” Vice President for Communications Brian Whitson said in an email. The department chose to use that semi-automatic carbine instead of modifying the M16s to remove the automatic function.

However, the department does not intend to dispose of the M16s in case they need to use them in the future, William and Mary Police Department chief Ed Schardein said.

According to Schardein, a change in national or local crime trends could cause the department to put the weapons into use. There would be a considerable transition period, including training officers to use the weapons — a process Schardein said could take one or two days, as officers are already proficient with other rifles — and modifying the weapons to remove the automatic function. The latter process could take longer.

“We have good defensive measures as we stand, but if things change, we may need to change and use a different weapon,” said Schardein.

Schardein said the department relies on the Virginia Fusion Center, an arm of the Virginia State Police which releases a daily intelligence report, for information about crime trends.

In addition, a Freedom of Information Act request submitted by The Flat Hat determined that there have been no excessive force violations recorded in the past five years for the Williamsburg Police Department, and only two complaints, which were investigated and determined to be unfounded. The William and Mary Police Department has had no excessive force complaints in the past five years and has only recorded seven total uses of force in that time.

Both departments are currently running trial programs looking into using body-mounted cameras for officers on patrol. The Williamsburg Police Department received several cameras which were later determined to be faulty. The William and Mary Police Department is still exploring options. Both departments use audio and video recording devices mounted on all of their patrol cars.

He described civil disobedience training as the use of pressure points and distraction techniques. The police reviewed these training procedures in April, 2011 when students staged a sit in at the President’s office. However, the situation was resolved before the police intervened.

Editor’s note: Deborah Cheesebro has since taken over as police chief of the William and Mary Police Department.