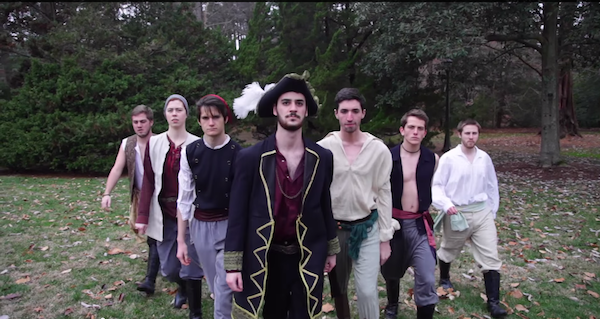 It’s said that there is no honor amongst thieves, yet it would seem that mercy, nobility and exuberant dance numbers are alive and well. The College of William and Mary’s Sinfonicron Light Opera Company brought to life this swashbuckling tale of love, loyalty and life upon the high seas in its 50th anniversary production of Pirates of Penzance.

This comedic opera, written by the theatric duo Arthur S. Sullivan and William S. Gilbert, premiered in New York City in 1879 where it enjoyed a successful run and has since won both Tony and Drama Desk Awards. The story focuses on young Frederic (Andreas Moffett ’15), a pirate apprentice, who, upon his 21st birthday, resolves to shun his former life of marauding. However, his plans are nearly sunk when he falls in love with the beautiful Mabel (Catherine Smith ’18) and is consequently forced to choose between the love of his life and the loyalty he owes to his former crew.

Led by director Taylor Schwabe ’15, Sinfonicron’s cast and crew made a great effort in bringing this rousing tale to the stage. While the show dragged in the beginning, the energy and conviction of the cast increased substantially during the second act. Costumes designed by Christine Fulgham ’17 were everything you could want and expect from a pirate opera complete with bare chests, feathered hats and worn leather boots. Although the cast’s makeup was artistically grungy for the most part, certain actors appeared unnatural beneath the stage lights. The cast displayed musical cohesion, especially during fast-paced numbers such as “Major General’s Song,” and the orchestra performed the show’s well-known score with such force that the conductor’s hands could be seen flailing wildly above the orchestra pit throughout the show.

While the pirate crew’s initial demeanor came off as much too tame for plundering rogues, the actors’ dedication to their characters’ tenderheartedness quickly grew to become one of the crew’s most endearing quirks. The sister ensemble exuded strong personas from the moment it entered the stage. Some ensemble members appeared more at ease on stage than others, but the group members’ overall cohesion allowed them to power through even the most noticeable hiccups. The goofy and lovable police ensemble, led by Josh Frakes ’17, executed their dance moves with all the necessary awkwardness and took full advantage of their stage time to leave a lasting impression.

As the show’s hero, Moffet proved a powerful vocalist and versatile actor as he transitioned from brave and romantic to torn and conflicted. Not to be outdone, Aidan Smith ’16, who played the Pirate King, exuded the swagger and cunning of a seasoned swashbuckler while demonstrating his mastery of dramatically unfurling scrolls. His stage presence during musical numbers gained momentum throughout the production and meshed well with that of Ruth (Christine Jacobs ’16), whose timing and facial expressions proved to be some of the show’s most effective details. Dereck Basinger ’16 came, saw, and conquered as the Major-General. His exuberance anchored several ensemble numbers and demonstrated great chemistry with Smith, despite their many misunderstandings. While several cast members struggled to maintain diction during some of the more extreme notes, the stronger vocalists carried the show’s many musical numbers.

The show’s set served its purpose. However, frivolous and shifting multicolored lighting cues during the show’s prelude clashed with an imposing and unimaginative pirate ship. Furthermore, lengthy set changes greatly decreased the show’s hard-earned momentum despite comedic attempts to entertain the audience. The depth of the set allowed for a great deal of movement and a large number of characters to appear onstage without seeming cramped. Props spread across the set and used by the actors were appropriate and appealing and, in most cases, contributed to scenes.

Overall, Sinfonicron’s dedicated cast proved that student theatre has a home at the College. Some details including volume, diction and timing detracted from the overall performance, but the cast’s vocal strength, cohesion and conviction were unwavering. Pirates of Penzance featured all the elements of an enjoyable comedic opera while presenting a story that encompasses love, honor and the happiest of endings.