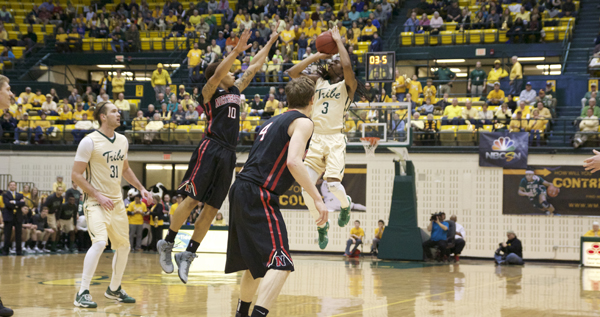 Saturday wasn’t an ordinary William and Mary basketball game, and the signs were everywhere. Spectators were treated to an exciting shootout against the backdrop of a packed, cacophonous Kaplan Arena. Northeastern was good, the College was better, and the fans couldn’t contain their excitement.

The atmosphere alone would’ve made Saturday appointment viewing for diehard Tribe fans, who constantly crave that kind of experience. But the Tribe’s performance pushed the game to another level. The contest featured first-class effort from all over the roster.

Senior guard Marcus Thornton scored only 13 points, but two of them came from a layup that he flipped as he crashed to the hardwood, a circus shot found in NBA arenas but not in many others. Junior guard Terry Tarpey and sophomore forward Omar Prewitt played brilliant all-around basketball, combining for 34 points, 13 rebounds, seven steals and frenzied defense.

With his brilliant offensive arsenal, it’s easy to picture Thornton firing 20 shots a game and padding his own scoring numbers. But Thornton buys the unselfish basketball Shaver is selling, and his patient work as a facilitator against Northeastern exemplifies that mentality.

Freshman Oliver Tot stole the day with a soaring, fastbreak dunk. And with the game already sewn up in the final minute, sophomore guard Daniel Dixon ripped a dunk away from Northeastern star Scott Eatherton, refusing to concede points even though the game was all but over. For basketball fans, the experience was wholly satisfying.

The College didn’t dominate wire to wire — they allowed Northeastern to whittle a double-digit lead down to two in the second half — but for long stretches Saturday, the team fully capitalized on its potential. The Tribe led for all but 22 seconds of the game, never losing composure or deviating from head coach Tony Shaver’s gameplan. Now at 6-2 in the Colonial Athletic Association, the College sits atop the conference standings, having won its first game against the pre-season favorite Huskies.

Saturday felt like the culmination of Shaver’s system and this roster. Now, 19 games into the season, the Tribe makes sense as a team. With long range shooters all over the roster — led by Thornton, who is hitting a blistering 45 percent from three-point range this year — opposing teams appear constantly fearful of the Tribe’s long distance game. When teams converge on the Tribe behind the three-point line, as Northeastern did, Thornton, Prewitt, Tarpey and junior center Sean Sheldon exploit thin coverage in the paint. Saturday’s win showed the Tribe’s perfect execution of Shaver’s system, which is oriented around ball movement and patience.

The performance does not mark a guarantee of post-season success, but the Tribe’s work against Northeastern serves notice that a CAA championship is on the table for this squad.

Every Tribe player was key to the College’s win Saturday, but after the dust cleared, my thoughts kept returning to Shaver and Thornton, coach and star. So much of the College’s early success this season has been spearheaded by Thornton’s unwavering commitment to doing what is best for the team. With his brilliant offensive arsenal, it’s easy to picture Thornton firing 20 shots a game and padding his own scoring numbers. But Thornton buys the unselfish basketball Shaver is selling, and his patient work as a facilitator against Northeastern exemplifies that mentality.

Thornton only averages 2.7 assists per game, but that number fails to describe his impact on his teammates; he constantly draws double teams and distorts opposing defenses. Thornton is possibly the best player in program history and certainly the one with the most pro potential, but he puts that star power aside to play for his teammates, not for himself.

The end of this team’s story is still unpredictable, but here and now, at the midpoint, it’s fun to be a Tribe basketball fan. History says the College will fall short of the final goal — a March Madness berth — but the whole team will give everything in the process.